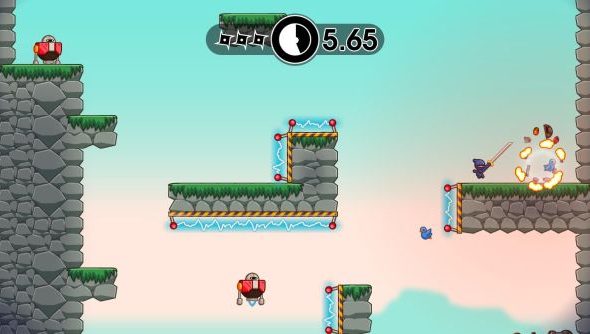 10 Second Ninja was one of my favourite games of 2014, and now it’s getting a sequel/remake. 10 Second Ninja X is coming from Four Circle Interactive with the help of Curve Digital, coming some time towards the middle of the year. Along with a HDifying of the original fast-paced platformer about throwing shurikens at robots, it adds 60 more levels with a batch of new mechanics, their own online leaderboards and more story.

For those that may have missed it, 10 Second Ninja is a very simple game – you’ve got ten seconds to clear a level of robots using a little blue ninja dude who can double jump, armed with three thrown daggers and a big sword. The only hazards are spike pits, the robots are stationary and while some levels can take a bit of thought to complete, most of your time in-game is about trying to find the fastest routes possible. It’s great fun, and it’s on Steamat the budget indie price point.

For the sequel, I asked game designer Dan Pearce how level design was changing between the two games, with the new 60 promising to be tougher and more complicated. It’s not only about adding systems and mechanics, but a change in philosophy as well.

“I feel like I was kind of hit and miss with the level design in the last game.” explains Pearce, “The designs were a teeny bit too basic and small. Most [of] the levels could be completed in two or three seconds and this time around I wanted most of them to be completable in more like four to eight seconds.”

He points out that while that might seem like a small change, it’s actually a fairly massive difference. It’s true too – trying to maximise the speed and efficiency of the first game’s later levels was a whole new experience versus its earlier, shorter ones. “As a player,” says Pearce, “it keeps you in a state of tension for double the amount of time per level and that brings the intensity of the whole game way up.” 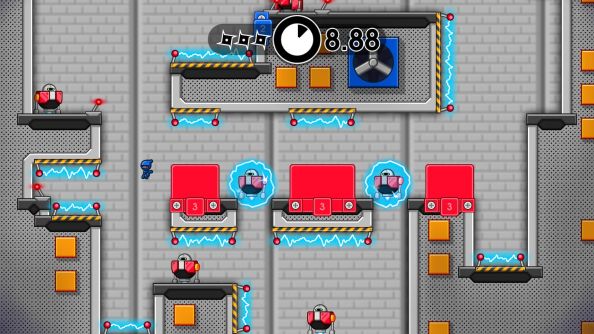 Of course, there’s new stuff aplenty too, “I’ve also tried to make the levels a bit more interesting from a systems standpoint. There are way more mechanics going on and interacting with each other. You really need to think through a level thoroughly before you attempt it this time, especially in the more difficult areas of the game. Basically, the levels are more intricate, more intense and just generally more mechanically interesting.”

The challenge will be keeping 10 Second Ninja X just on the right side of easy to learn while building on those strengths and expanding the scope. It’s a delicate balancing act, and one where even a single bad level could spoil it for the small but dedicated community that built around the first game and will expand in this one.

Here’s the trailer, which Pearce says left him “very wet by the end” – be that from the eight spit-takes in recording or some other, sexier reason, we’ll leave you to decide: