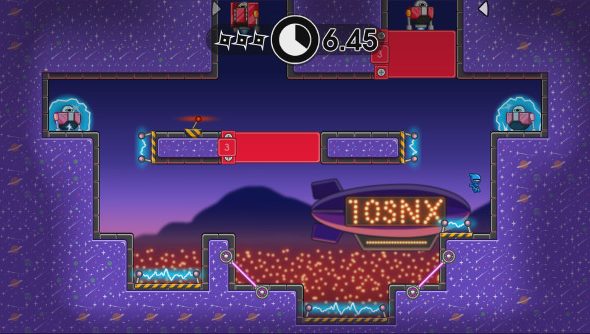 I quite liked 10 Second Ninja, a ludicrously fast paced action-platformer that hit digi-stores back in 2014. The sequel and remake, X, first popped up a couple of months back with a rather good trailer and a whole lot of 1080p art to sell itself on. Now we know it will be ready and playable come July 19, as revealed in another new trailer that tries to explain everything in less than 50 seconds.

Try out some of the best indie games while you wait.

What’s best about 10 Second Ninja isn’t necessarily even finishing it, but optimising routes. The most obvious will, almost always, be the slowest. As you learn its systems and how to handle a controller at the speeds it wants you to, you’ll see more options. It’s everything a game of this sort should be – fast, easy to learn, impossible to perfect and totally addictive.

Hopefully new mechanics and a batch of new levels don’t over-complicate that. Sequels, in case you’ve never encountered one before, are hard to get right, but there’s enough unexplored depth in the formula that I think Four Circle Interactive will be able to pull it off.

Along with the 60 new levels, there’s a bunch of other new stuff in there. Mini-games, unlockable costumes, a ghost mode, hub worlds – it’s all in there. A touch more info available over on the official site. Also, watch the original trailer again, you’ll love it.