The theatre began the moment I first met the Crows Crows Crows crew and didn’t end until we parted company. At last year’s GameCity, I was pulled through a bait-and-switch demo by a team of bright young developers who smiled knowingly but didn’t allow me to tell anyone about it afterwards. Their leader, The Stanley Parable’s William Pugh, is a man who probably cleans his teeth ironically after he’s eaten his meta-bix.

Why I expected anything different this time, I don’t know.

NB: Dr. Langeskov, The Tiger and The Terribly Cursed Emerald: A Whirlwind Heist is only 20 minutes long, and I’m about to spoil it pretty comprehensively. It’s free and out on Steam today, so if you’re intending to play it, I’d suggest you go do that first.

“It’s a heist game of massive proportions, Jeremy,” Pugh says. “It has a tiger enemy in it – it’s got a big old vehicle chase scene with combat mechanics. It’s got loads of mechanics – loads of gameplay mechanics. I swear to you that there’s a grappling hook. There is a grappling hook in this game. Please believe me.”

Once you boot up the Whirlwind Heist, you find yourself on the outside, in a staffroom. There’s been a mistake, and another player is already inside the game. It’s single-player, so you can’t join in, but it’s not so easy for you to leave either. Sorry.

You’re told all of this by a disembodied Simon Amstell, familiar to UK readers as the stand-up who saved Never Mind the Buzzcocks, and who once upset talent show crooner Lemar with a high concept interview feature called ‘Lemar from Afar’, in which he shouted questions through a megaphone across the world’s largest car park. To Whirlwind Heist, he contributes stammering, uncertain direction, delivered with a trademark ambiguity pitched somewhere between bemusement and bursting out laughing.

The joke is simple and quite charming: developers, it turns out, don’t code their games beforehand and fire them out to players. Rather they orchestrate them live from behind the scenery, triggering events and holding their breath so that you can’t hear them through paper-thin walls. 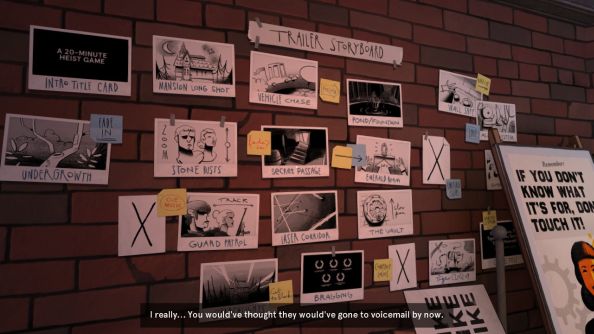 Since you’re here, and since a strike situation has left the Whirlwind Heist team woefully understaffed, it’s up to you to ensure the player has a good time – pressing buttons to activate weather effects and pulling levers to release enemies on cue. Pugh handled level design on The Stanley Parable, and this is very much a level design meta-game.

In fact there’s a lot of The Stanley Parable wisely revisited here: the same first-person perspective with a single ‘do’ key; the same anarchic glee of disobeying a direct command; the same Portal-like pleasure of peeking behind the curtain of the intended experience. Stanley Parable originator Davey Wreden wasn’t involved with this project, but you wouldn’t know it – Amstell’s exasperated narrator snaps and overshares in familiar fashion, and Crows Crows Crows writer Jack de Quidt has his own sideline in quiet asides and comedic desperation. 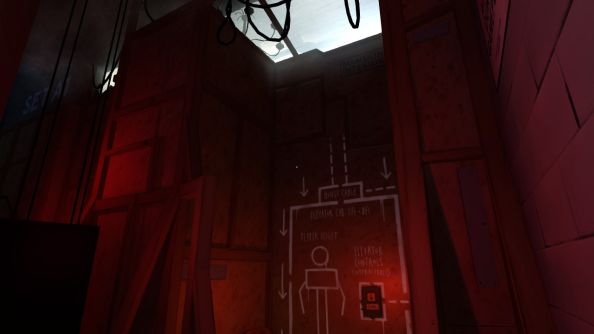 Whirlwind Heist is the simpler game; less suited to exploratory replays and Game of the Year feature analysis. Instead of taking the wrong fork to spite Amstell you’re digging your heels in, delaying pressing the next button to open another room. I think that’s because, although many of the trappings are the same, the two are decidedly different games. If Stanley Parable was about the tension between orchestrated narrative and player agency, this Heist gone wrong might be a more straightforward ode to hardworking developers, trying madly to keep up with their players and show them a good time in impossible conditions. Or it might just be a well-told joke.

It’s not the game that was facetiously promised, but if you can embrace its Wes Anderson whimsy, there’s a winking whirlwind adventure here.