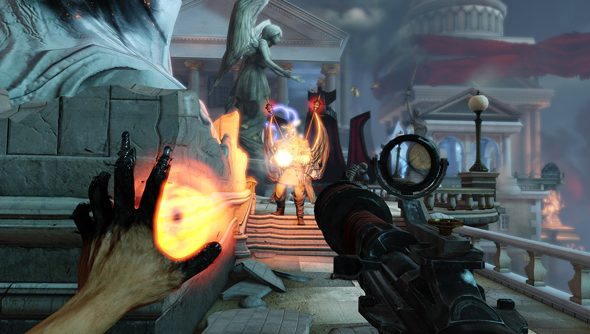 You might not be able to put a name to the company – a Kotick, a Houser, or even a Riccitiello – but 2K are there, just beneath the surface of some of our favourite things. They are the force that funded BioShock; the real Rockstar Games. And now they’re pouring their cash into Twitch, the de facto home page of streamed PC gaming.

2K have joined money companies Thrive and WestSummit Capital in a whopping $20 million investment in Twitch, the streaming site announced today. Though the exact amount of 2K’s contribution wasn’t disclosed, their Infinite earnings will be used to help Twitch scale up their infrastructure and ads divisions to keep up with escalating demand.

“Gamers today have a healthy appetite for both producing and consuming live video game content, so it’s vital that we’re not only keeping pace with them, but staying one step ahead,” said Twitch COO Kevin Lin, who from the sound of it is in danger of tripping over his own feet. “With the investments from Thrive Capital, WestSummit Capital, and Take-Two Interactive, it ensures we can more effectively grow and tap into new markets.”

We won’t necessarily feel the benefits of all of that cash directly, however. The investments will also help Twitch prepare their infrastructure for the advent of Sony and Microsoft’s new plastic living room boxes, which will both feature Twitch streaming functionality.

“Given the excitement surrounding Microsoft and Sony’s upcoming video game consoles, Twitch will be in a lot of living rooms this holiday season,” said Lin. “Their intuitive and accessible integration of Twitch removes the barriers to entry which casual broadcasters currently face, so we expect traffic numbers to soar when these consoles launch. The trend of video game based content as entertainment is not only here to stay, it’s becoming a critical part of the holistic gaming experience.”

Are people going to be watching LoL on their consoles? I suppose that’s more couch-friendly – but it’s a bit weird, isn’t it?