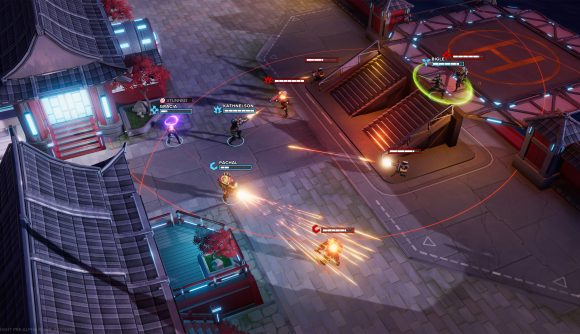 There are tons of team-based competitive games around now where everyone splits into teams, picks a character, and then heads into battle. But there aren’t many where you get to pick every player and control the whole team. That’s the idea behind 4Sight, a real-time PvP squad tactics game coming to PC next year.

The first step in 4Sight is to pick your mercenaries – you’ll get four, but how you fill out your team is up to you. Do you go in heavy with two assault or offensive mercenaries, without making room for support heroes like healers? Or do you play it safer with an assassin and a sniper, filling your ranks out with supports?

4Sight uses real-time strategy controls, but your attention is only split between four heroes rather than dozens of grunts or a single MOBA character. You’ll be able to use formations, cover, elevation, and abilities to defeat your opponent in the game’s colorful arenas, which have a variety of different objective types. And you’ll be able to pick out equipment, gadgets, and skills for each of your chosen mercenaries.

It’s hard to get across on paper how much different this feels from most arena brawlers, so how about a trailer to show how it all looks?


You can pre-register for a chance at a hands-on session of 4Sight before it heads into its alpha access phase early next year. A full launch is planned for later in 2019, and it’ll be a premium-priced title. It’s being developed by Ukranian studio Shadow Masters, and published by Travian Games.