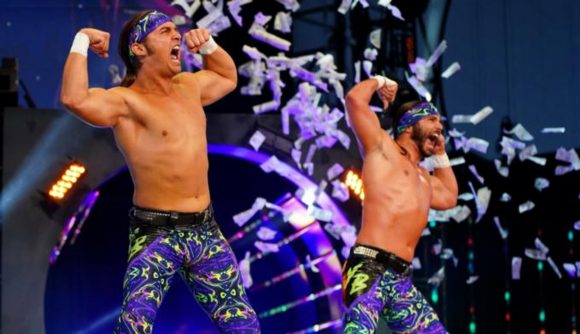 AEW has at least two videogames in the works. Ahead of an official reveal this coming week, All Elite Wrestling’s CEO spoke about the two AEW-branded games fans will be playing soon.

At a press conference following Full Gear, AEW’s latest pay-per-view, CEO Tony Khan commented on the two games AEW has in development. Transcribed by to Sean Ross Sapp of Fightful, one will be a standard console game that Khan wants to be “best in class”, and the other a booking sim on mobile. The former echoes Kenny Omega’s comments in September, when he told GameSpot he believed AEW’s upcoming game is “probably the best wrestling product as a video game that you could probably find on the market”.

The latter will let players manage AEW as a GM, and already has a title, according to trademark filings: AEW: General Manager. Short, sweet, and to-the-point. AEW Games is holding a reveal event on Tuesday November 10 across all its major social media channels. As of now, smart money’s on ‘AEW Games 1.0 Special Event’ having footage of both of these projects, and a release date for at least one.

We don’t know who’s making any of these yet – Omega’s spoken to syn Sophia in the past, the Japanese studio that made WCW vs. nWo: World Tour, WCW/nWo Revenge, and WWF No Mercy for the Nintendo 64. Aubrey Edwards, a referee for AEW, used to work in game development as a programmer and producer, and is lending those talents to the company, going by her Twitter bio.

AEW is working on MULTIPLE games, and they're catering to different platforms and interests. They want a best in class console game. They're going to put out a booking game similar to TEW by the sounds of it, too.

We’ll find out Tuesday. Here’s the best fighting games, best racing games, and best multiplayer games to keep you enthused until we get to put MJF in headlocks over and over.