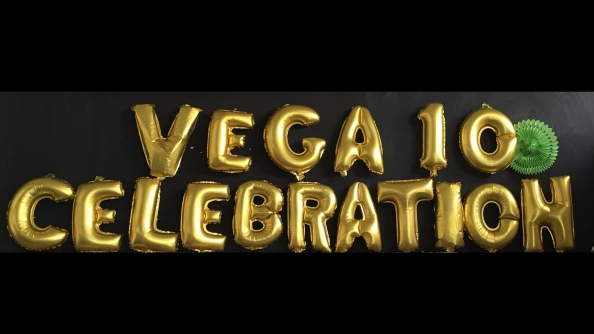 AMD’s graphics guru, and senior VP, Raja Koduri, has been out in Shanghai with their GPU design team celebrating the finalising of the high-end Vega 10 silicon.

Which games will push the next generation of graphics cards? Here’s our pick of the best upcoming PC games to stretch their silicon.

We’re all poised to welcome AMD’s first 14nm graphics chip, the Polaris-based Radeon RX 480, next week, but with Nvidia and AMD coming at their respective new GPU ranges from different angles we’re not really going to know how the latest battle for the high-end will end up until there are genuinely comparative cards out in the wild.

Nvidia has gone big with their first Pascal cards, the high-end, super-expensive GTX 1080 and GTX 1070, while AMD is focusing on the other end, trying to nail the mainstream, volume market with their Polaris cards, the RX 480, RX 470 and RX 460.

AMD’s Vega 10 chip though is the manufacturer’s high-end GPU designed to take on the might of Nvidia’s GTX 1080, and potentially even the GP102-powered GTX 1080 Ti and Pascal Titan cards too. 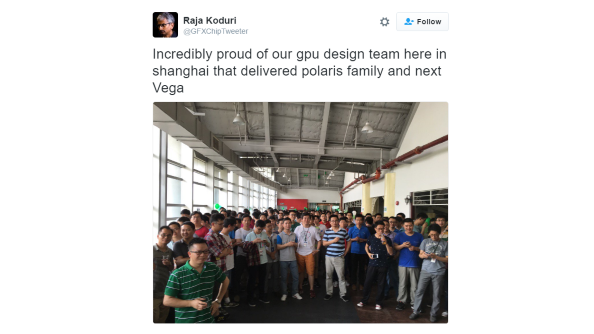 AMD’s Shanghai team has now finalised the hardware design and is shipping responsibility over to in-house and third-party developers to take it further. Their GPU roadmap has the Vega parts scheduled to appear in 2017, with some reports expecting an appearance in the first quarter, though Koduri himself has already been managing expectation saying there’s still a ‘long way to go.’

There could be some sort of appearance at CES in January, but we wouldn’t expect an actual release until much further into 2017.

That may still tie in nicely with when we expect to see the Pascal-based Titan card – historically released in springtime – lining up a potential GPU battle royale between AMD’s Vega 10 and Nvidia’s GP102 GPUs. We’ve already leased a Pacific island in preparation, covered it in hidden cameras and deathly traps, so we can dump a selection of the high-end cards on it when they finally get released.

There have already been a fair few rumours and leaks surrounding what we should expect from the Vega 10 chip, with most expecting the fully-specced GPU to come with a hefty 4,096 cores/shaders, be based on the same 14nm finFET process as Polaris and come sporting the second generation of Hynix’s high-bandwidth memory (HBM).

Combined with the expected high-efficiency AMD has baked into their Polaris GPUs, that ought to make the Vega 10 cards seriously powerful beasts. Though whether we’re going to see them appear next year as the range-topping Radeon RX 490, the successor to the Fury cards or as a separate 500-series we still don’t know.

What we do know though is that AMD is also set to release their brand new Zen CPU design, in the form of the eight-core / sixteen thread Summit Ridge chip early next year too. With a Zen CPU and a Vega GPU (or two?) humming away in your rig a future with high-end, fully-AMD specced PCs looks a distinct possibility.