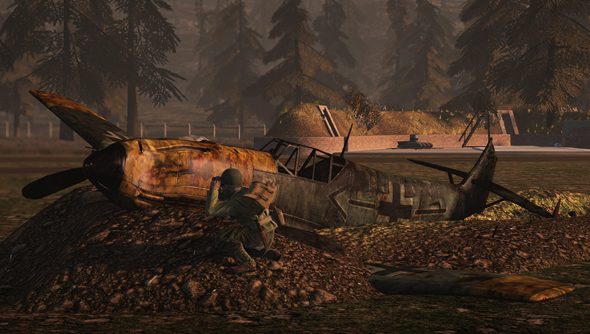 Heroes & Generals rather sells itself with its pitch – a war game that’s both FPS and, well, wargame – but this reminder certainly can’t hurt: it exists. Not only that, but since we last took a proper look at it in September, it’s grown like mould on an abandoned crate of spitfire parts buried in Burma. Its most recent protrusions are realistic-yet-practical prone positioning, character progression seemingly modelled on real armed forces careers, and nicer graphics for all.

The game’s latest build is named Newgarden, after the American Major General with excellent eyebrows, and its headline feature is that new character progression tree.

In Heroes & Generals, your rank isn’t just a series of escalating triangles that show up at the conclusion of a match. Rather, every player starts out as an infantryman – and as they capture points, kill enemies and gain experience, they’re given options to join particular branches of the forces – armour, recon, or air. It’s a character progression system that offers tangible, RPG-like skill growth, and guarantees a fresh supply of fodder for the veterans. It sounds fascinating, but clearly skirts with potential frustration among the group you really don’t want to frustrate – the newbies.

For the Newgarden update, the dev team have also fiddled with the game’s ‘low quality’ render to grant lower-end machines a graphical boost.

“This will raise the minimum requirements a tiny bit,” they write, “but more than makes up for it by making the low quality setting look so much better.”

It’s not exactly customary to post screenshots of games when they’re look anything other than they’re absolute best – but here’s Heroes & Generals at its worst: 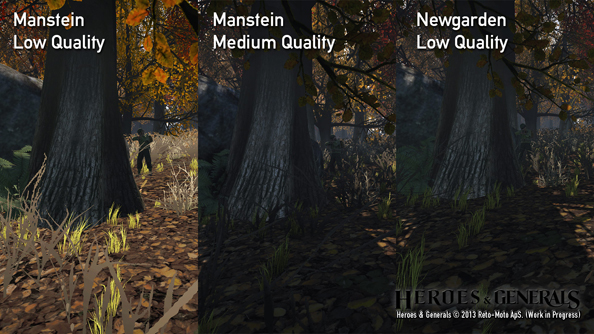 Elsewhere, the latest update introduces new textures for tanks, a new Airfield map (which reportedly improves on the old one with multiple attack routes) and a streamlined interface split into distinct ‘Heroes’ and ‘Generals’ segments to better match the layout with players’ intentions.

Finally, there’s the new prone mechanic, which is explained best in a diagram that looks like a Harlem Shake successor’s how-to: 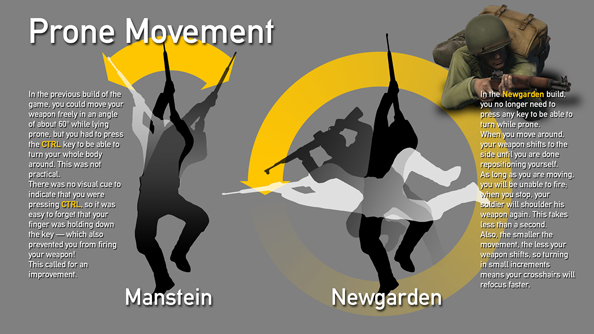 Lots new, lots that sounds good. But have any of you lot played it yet? I guess that’s the kicker, isn’t it?