For a PC gamer, with a GeForce-powered rig, Nvidia’s Shield has almost become a must-have accessory, even this far on from its initial launch last year. The ability to bring your gaming into the living room, writ large on your big-screen TV, was always part of the promise of the Shield devices, but neither the handheld, the tablet, or the previous Shield box, could fully deliver. With this wee device that’s certainly not the case anymore.

With 4K streaming support, which takes in HDR PC gaming along the way with it, the Nvidia Shield is absolutely the best way to get big screen gaming out of your Nvidia PC. The latest 4K HDR monitor from Asus has been disappointing, and I’m not convinced about the future of the Big Format Gaming Displays Nvidia has been championing either.

If you want great 4K HDR performance from your PC then a TV is where it’s at, either wired directly in, or streamed via your Nvidia Shield. And that’s because even if the panels were better in PC HDR monitors, the actual setup is a constant nightmare.

Despite Nvidia’s original reveal proclaiming this device a ‘new’ Shield Nvidia actually retained the same specs list as with its previous streaming box. That’s no bad thing – the Tegra X1 processor inside the old Shield TV is still pretty much the most powerful mobile chip around, especially if you want to do anything graphical with your device. And hey, we’re gamers, so we want graphics, right?

The Tegra X1 is an Arm-based SoC with a quad-core Cortex A57 CPU component running at around 2GHz. The GPU side of the equation though is what makes it such a gaming powerhouse – it’s rocking Nvidia Maxwell silicon with 256 CUDA cores and a 1GHz operating frequency.

All that’s really changed with the new streamer itself then is a little weight-loss and the culling of the microSD slot. The Shield is now around 40% smaller than the previous design, making it look far more like a modern streaming device, more akin to the slimline 4K Amazon Fire TV. That aside there’s no difference to the older device, especially as Nvidia updated the existing Shield with the same software as the new device.

With the older controller, however, there is no far-field microphone making the Google Assistant tech moderately less interesting for original Shield owners. 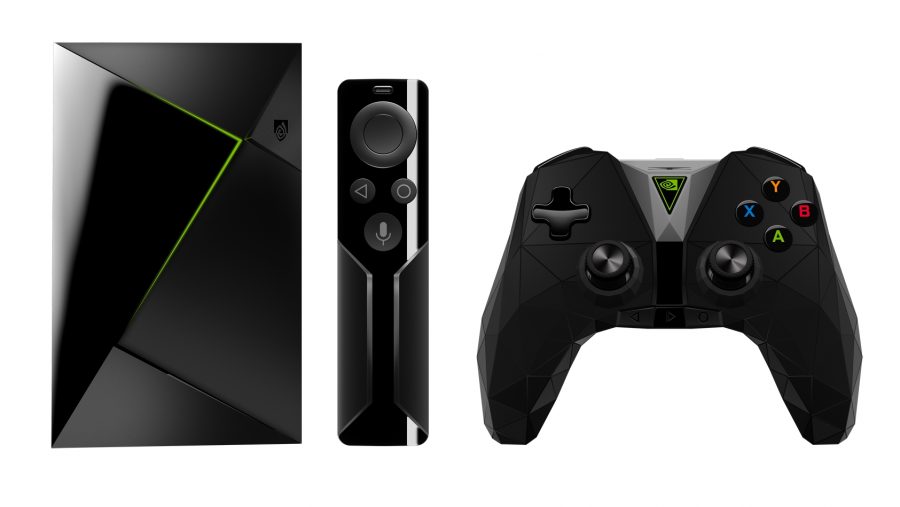 That lack of movement on the specs sheet means this base device comes with 16GB of built-in storage and 3GB of system memory. There is a larger ‘Pro’ version of the Shield which comes with a 500GB hard drive inside, but that is essentially unchanged from the version which was released in 2015.

In terms of ports it comes rocking a wired gigabit ethernet connection, a pair of USB 3.0 sockets and an HDMI 2.0 display connection with HDCP 2.2 to deliver the 4K goods in Netflix and Amazon Video. As well as the LAN port the Shield also comes with 802.11ac WiFi for those with a cable phobia.

Out of the box the Shield also comes with the latest Android 7.0 based version of the Android TV operating system. Android TV has come along a fair bit since I last tested it while reviewing Sony TVs, and the latest Shield integration is very well done. Android TV has also now gained Google Assistant support, which takes advantage of the far-field microphone built into the svelte Shield controller.

That means it can be constantly listening in to your conversations (tin foil hat not supplied) so you can control the device without ever having to lift a finger. Just chat to your Shield and it will display whatever you’re looking for, so long as the devs of the relevant apps have plumbed in the Google Assistant API.

This opens it up to be the hub for your connected home (you future-living son of a gun, you) with Samsung’s SmartThings integration to control your intelligent kettle or washing machine (yawn) and the Nvidia Spot. This is a little far-field mic you can plug into any wall socket around your home and use it to control devices connected into your Shield as a hub when the controller’s out of earshot. 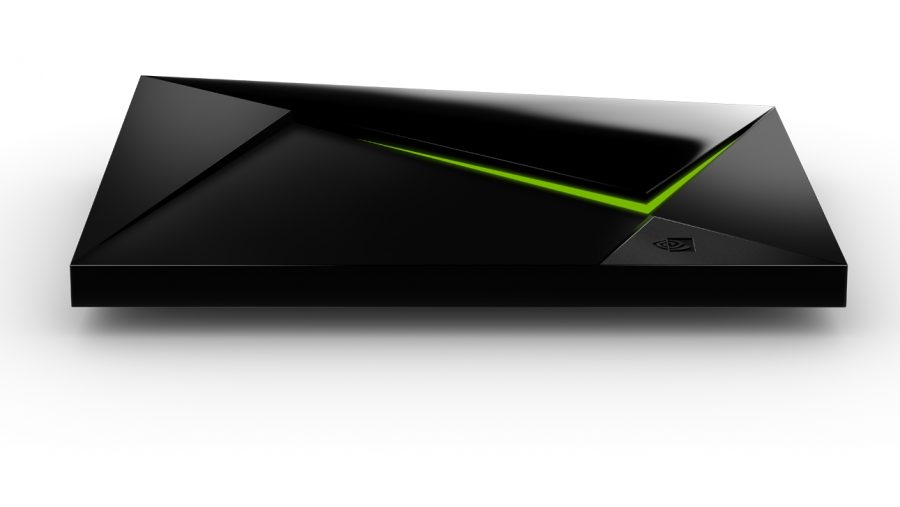 The $180 (£188) ticket price now also includes the updated Shield wireless controller as well as the smaller Shield remote, which you used to have to pick up as an optional extra.

The new Shield wireless controller is a much more streamlined beast compared to its predecessor, though the tessellated design, owing much to the 10-series GeForce shrouds, might be divisive. It’s also powered by Bluetooth now instead of WiFi Direct, which means you can easily use it for other devices if you so wish. Nvidia have also added an IR blaster to the controller, so you can control your TV, and haptic feedback with dual vibration engines in the handset.

I much prefer the smaller scale of the updated controller, though it doesn’t quite have the quality feel of the DualShock or Xbox controllers. It’s still mighty responsive, though personally I prefer the offset analogue sticks of the Microsoft layout over the symmetrical Playstation setup. The battery life is impressive – after a full weekend of gaming it’s still about 40% full.

My one genuine issue with it is the layout of the secondary function buttons. As it’s an Android device there’s a homescreen button as well as the now-standard Start and Select buttons. They’re arrayed close together in a line messing with my thumbs’ Xbox controller muscle memory.

But it’s the overall performance of the Shield where things get exciting, so long as you’ve got a GeForce-based graphics card, anyways…

I’ve been using game streaming in some guise or other to escape being tied to the desktop for a few years now; I’ll use Steam to stream to my laptop when I’m sat on the sofa, and have spent a long while using my old Shield tablet to stream onto my TV too.

Streaming is fine for games where you don’t need split-second reaction times, like most adventure games or third-person titles, but for things like racing or sports games the input lag is too disruptive to make it a workable alternative to gaming directly on your PC. I’ve always used FIFA to test this and everything from the original Shield box and tablet to the Steam Link has failed. And normally failed miserably.

With Nvidia’s reworked Gamestream though the latency has been dropped to the point where it’s essentially invisible. In terms of responsiveness I can tell no difference when I’m downstairs playing on my TV compared with when I’m sat at my desk, playing locally. Visually it’s excellent too. The original version, even on a strong local network, had regular artifacting and constant drops in image quality down to 720p at 30fps.

I stopped using the Nvidia application for previous Shield devices, preferring the third-party Moonlight game-streaming app because it felt more robust and I could lock it to 1080p and 60fps. Now there’s no need. Nvidia have also introduced 4K HDR playback – for compatible TVs and games – and haptic feedback for the new controllers across Gamestream. Though you’re still going to need a hell of a GPU in your streaming rig to spit out the 4K vibes.

Another big thing is that there is now a Steam Big Picture Mode app installed as standard which simply allows you to bring up the standard TV-based Steam interface running from your remote gaming rig. It allows you full control over your Steam account from within the Shield, effectively turning it into a Steam machine.

This all makes the Shield the perfect living room accompaniment to your GeForce-based PC. Sadly if you’re running an AMD graphics card in your gaming rig your options are far more limited. But if, like the majority of PC gamers, you’re running an Nvidia graphics card (from the GTX 650 onwards) the now-excellent Gamestream is there for you. 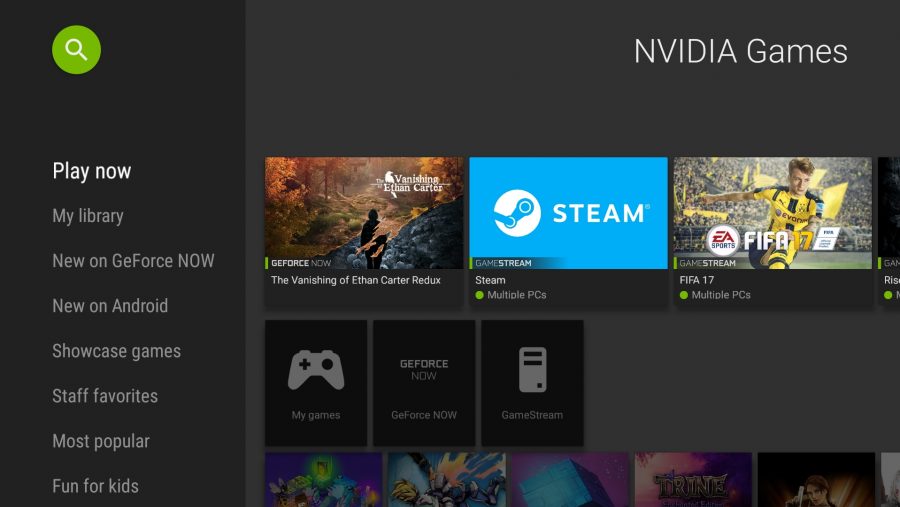 It’s still not 100% perfect, however. There are still a few teething issues with using multiple controllers on the Shield for gaming. You have to activate a multiple controller setting on individual games (like FIFA) or they’ll only see a single input. It doesn’t always work though, sometimes leaving subsequent controllers invisible to the game.

Nvidia has also re-worked its GeForce Now service, putting it in line with the way it now works on the desktop PC, that means as well as streaming whatever is in the existing library you can also stream your own games from your own digital libraries on Steam or Uplay.

The actual online streaming of GeForce Now games is pretty good, even over the moderately restrained network we have in the PCGN office. It’s slick, generally robust and looks great.

You can also purchase Android games which have been tweaked specifically for the Shield box, like Doom 3, Half-Life 2 and Trine. They use the native rendering power of the Shield to full effect, letting you game just using the power of the device itself.

With the Shield Nvidia has effectively killed the living room gaming PC. If not then it’s certainly taken to it with a bat, leaving it looking like Walking Dead Glenn, all popped eyeball and everything.

With my GeForce-based PC in my home office and the Shield streaming invisibly to my TV, I’ve got no need to have an expensive dedicated gaming machine in my living room. Now the input lag has been all but expunged the stream is pretty much seamless. The Steam Link has got nothing on the Shield.

It’s also a brilliant streamer too. The Shield can cope with pretty much any media file you care to throw its way, linking in to the likes of Kodi and Plex to bring your (totally legitimate) library into the living room in a super-slick way. It’s got built-in Google Cast support so you can toss content from your phone at your TV too.

And with 4K HDR support, as well as pass-through support for Dolby Atmos, TrueHD, Dolby 7.1 / 5.1, DTS-X, DTS-HD Master Audio and audio playback up to 24-bit / 192KHz, it’s not going to be out of place plumbed into your existing home theatre setup either. The Shield is one feature-packed little streamer and future-proofed to boot.

You don’t need to get the latest Shield box to enjoy the fruits of Nvidia’s labours, the old version will be getting an update now its diminutive sibling has launched, but the smaller scale and improved controller make this the superior version.

If you’re a GeForce gamer the Nvidia Shield really is a must-have accessory and the only media streamer you should consider getting for your living room.