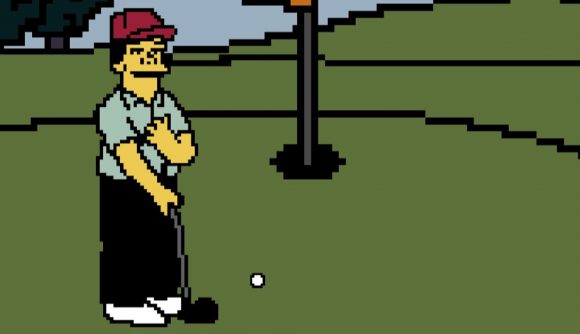 Do you remember the episode of The Simpsons where Bart gets caught trying to steal a video game, Bonestorm? The crux is him disappointing Marge with his delinquency, then trying to get back in her good graces. At the end Marge surprises him with the game “every boy wants” – Lee Carvallo’s Putting Challenge. Someone’s gone and made Lee Carvallo for real.

You can download the thing on Itch.io or play it in browser, and it’s a spot-on recreation. You have two options, either putt the ball normally and perhaps win the hole, or do what Bart does and hit the ball into the parking lot using power drive. I got an inordinate amount of satisfaction from redoing the whole gag from the episode – if you remember when it aired, you might just get the same kick.

The game was made by Aaron Demeter, and the latest update includes the scoring pencil, naturally. He’s been a bit overwhelmed by the attention, writing “It’s been a great learning experience and I’m excited to make some more games for y’all!” There’s no charge, but you can leave Demeter a tip for providing such good nostalgia. Bill Oakley, showrunner from that season, gave it his blessing, too.

The Simpsons’ gaming references didn’t stop in the Nineties. Last year, the show had an episode featuring esports, which Riot Games consulted on. If Lee Carvallo’s Putting Challenge wasn’t classic enough for you, you can also play The Simpsons arcade game for free in your browser.

For something a bit more modern, we have round-ups of the PC Gaming Show, the Future Games Show, and the first day of the Guerrilla Collective showcase from this year’s not-E3.