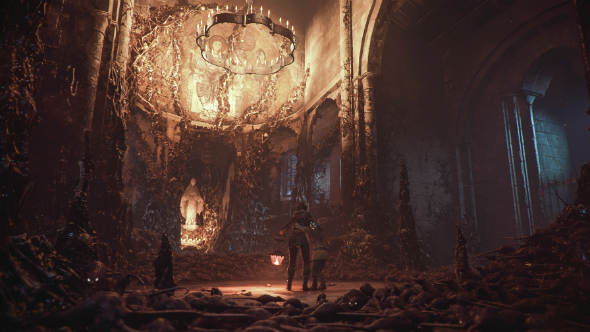 The picture A Plague Tale: Innocence paints of 14th century France is one of the most oppressive, bleak and hostile environments ever realised by the medium. Realised by the darkness of a world lit predominantly by candlelight; the cruelty of Inquisition troops; thousands upon thousands of rats pouring forth from every nook and cranny of the environment; and in the middle of it all a 16-year-old girl called Amicia, and Hugo, her five-year-old brother.

For a gander of what else is on the horizon, check out these upcoming PC games.

The core gameplay mechanic of A Plague Tale: innocence is light. The swarms of ravenous rats won’t go near it, however being in the light or holding a torch will make hiding from Inquisition troops nearly impossible. It’s a familiar mechanic for adventure gaming, but the consequences have never felt so dire, as demonstrated at the very beginning of a pre-alpha gameplay demo. 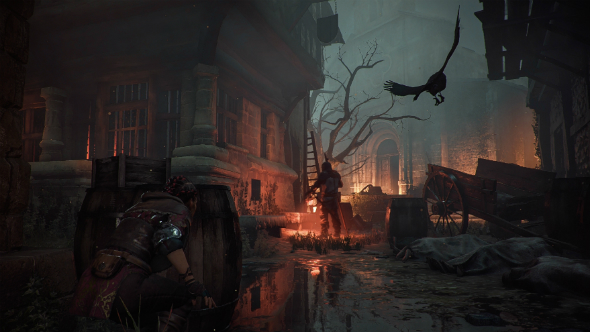 Hugo is being held captive by soldiers of the Inquisition, suspended in a cage above a mass of rats. Nearby, two soldiers beckon the player to reveal themselves, promising no harm will come to either of them. Amicia is not as naive as her brother, who wails and howls for his mother – she’s seen what religious persecution entails. She pulls out a simple sling, loads a stone into it and takes aim at one of the soldier’s lanterns before taking fire. The fire spills out across the ground and the soldier is plunged into darkness – initially the surrounding stream of rats squeal and retreat, but once the fire dies out they surge over the soldier in frenzy, picking the flesh from his bones while he’s still screaming.

The other soldier is torn between finding the source of the projectile, saving his friend and defending himself. Amicia takes aim again. Another successful hit, another torrent of screams. With the horde of rats now feeding, Amicia runs to her brother and frees him, but of course it’s not long until the rats have finished their meal, so Amicia and Hugo seek refuge in a local church, also believing their mother to be there.

“How can you stay innocent in such a world?” Asks Asobo Studios CEO Sebastian Wloch, “Even more so when you are a five-year-old boy who’s first experiences of the world are like this – this is why the setting is super interesting, because we wanted to put the children in the worst situation possible. Medieval times, if you think of it from the child’s perspective, were pure evil. During the Black Death people were killing strangers thinking they were carrying the plague, everyone was schizophrenic and super protective: it’s the worst place to put a child and ask them to survive.” 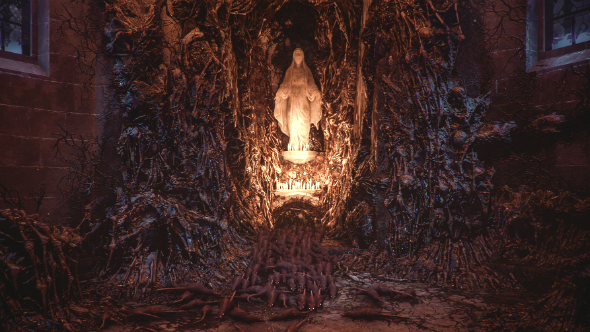 The next part of the demo takes place in a church, and once again Amicia is tasked with navigating a horde of rats, after hearing the screams of her mother echoing out from behind the church’s altar. Something’s not quite right in the vacant church though. The walls are lined with piles of bones and clumps of rotting flesh, all held in place by slick black substance. A source of light is needed to explore further, so Amicia sends Hugo through a small grate to collect an unlit candle. Once that’s obtained, she knocks a chandelier to the ground with her sling, lights her candle from the flaming wreck and uses the ailing light source to make her way over to one of the Inquisition’s lanterns. The noise and commotion draw in more rats, and it becomes startlingly apparent that the festering structures lining the church walls are rat nests. Within seconds the entire room is alive with streams of vermin, thousands of them gushing from every orifice of the church and surrounding the children.

Following the screams towards the church’s crypt, we find ourselves in a filth-lined tunnel, a sort of inky-black, primordial artery that’s reminiscent of a warning image you’d find on the back of a packet of cigarettes. The demo ends there, music screeching to a halt, screen fading to black and the chirping of a thousand rats reaching almost deafening levels.

For obvious reasons, that doesn’t sound like a particularly realistic presentation of the setting. But Wloch is keen to dismiss any notion that the game incorporates fantasy. “It’s not fantasy, it’s how the children perceive the world and how the world can appear bigger or more villainous than it is in reality.” That childish perspective plays into the gameplay too, as Hugo will often wander or run into dangerous areas, forcing Amicia to follow him. 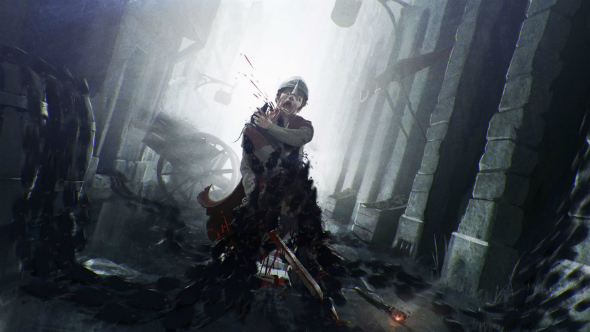 For obvious reasons, that doesn’t sound like a particularly realistic presentation of the setting. But Wloch is keen to dismiss any notion that the game incorporates fantasy. “It’s not fantasy, it’s how the children perceive the world and how the world can appear bigger or more villainous than it is in reality.” That childish perspective plays into the gameplay too, as Hugo will often wander or run into dangerous areas, forcing Amicia to follow him.

There’s the potential there for the game’s narrative and gameplay to descend into a quest to find and save Hugo time and time again. “We want it to be a bit tricky,” explains Wloch, “and for it to bring about some pain at first as Hugo is only five, so he’s very naive. We want to have this sense that Amicia is more mature than he is and that she’s seen more of the world than him. So at the beginning Hugo just jumps at any opportunity to do something wrong, but he will grow up over the course of the game.”

How and where the story goes is impossible to say. After all, it’s still being written. As masterful a demo as it was – superbly polished and visually arresting – It’s still just a prototype: something to secure funding and prove the potential of the concept. As such there’s no guarantee that any of this will make it to the final game when it does launch; it doesn’t currently have a release date. Fortunately however, the technological heft required to animate and render literally thousands of rats in a single scene and the presence of a realistic and versatile lighting system both suggest that an awful lot of the hard work has already been done in terms of designing the game engine.

Excited for A Plague Tale: Innocence? Let us know why in the comments below.