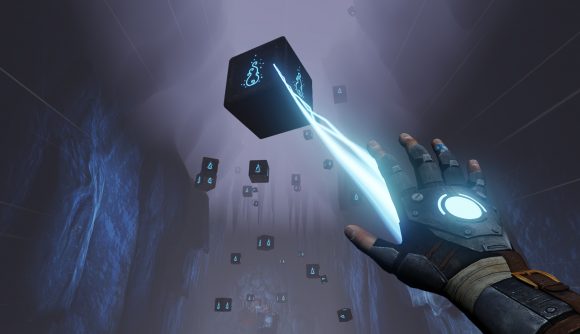 Not to be left off the free games bandwagon, Steam is giving away copies of A Story About My Uncle until Monday.

A Story About My Uncle is a surreal little first-person platformer. You’re searching for your strange, inventor uncle, using devices he’s created to move through a strange and impossible world. But this isn’t any ordinary walking simulator – instead, A Story About My Uncle has you swinging across bottomless voids using a grappling hook made of pure energy.

The framing device is an unseen narrator – you, the player, many years later – telling a bedtime story to a child, about how you followed your uncle on an adventure into a pocket dimension which he usually used for disposing of trash. Once you’re there, you can use a special suit he created to power gargantuan leaps, chaining your jumps together with the grappling hook to propel yourself around the surreal landscapes.

It’s an exciting little game, due in no small part to the fantastic sense of velocity it conveys with its movement mechanics. And hey, you can’t argue with the price tag, right?

If you’re interested in picking up a free copy, head over to the game’s Steam page and click “Install Game.” A dialogue box will pop up, confirming that A Story About My Uncle has been added to your Steam library, and from there you can confirm that you want to install it, if that’s what you want to do.

Get hip: Our list of the 15 best indie games on PC