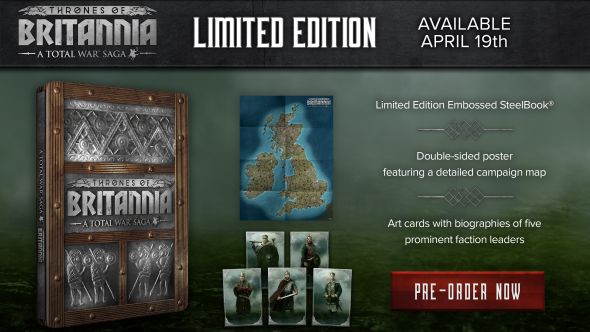 A Total War Saga: Thrones of Brittania’s physical and digital release date has been confirmed. A press release from Creative Assembly confirmed that the game will release on April 19.

Thrones of Brittania takes inspiration from Warhammer to revamp the Total War template.

The physical edition of Thrones of Britannia comes in an embossed steelbook inspired by the decoration on Anglo-Saxon period helmets, including the famous example at Suffolk’s Sutton Hoo. The edition also includes a double-sided poster featuring a campaign map and five art cars portraying prominent in-game faction leaders.

Total War: Thrones of Britannia will see ten Anglo-Saxon factions fight for control of what Creative Assembly say is the Total War series’ “most-detailed” map ever, in a series of branching campaign stories.