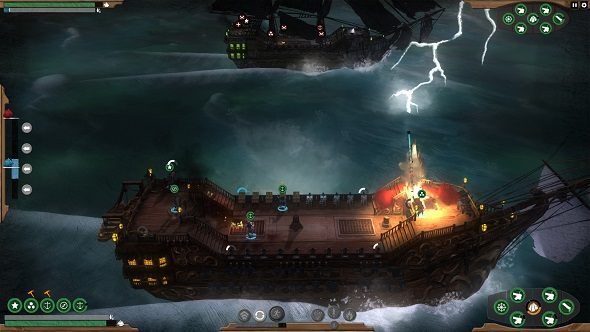 Launching an informational broadside, developer Fireblade Software have released a new trailer for their pirate simulator, Abandon Ship. Showing off the basics of ship-to-ship combat, this trailer has players battling both enemy pirate crews and fierce tropical storms.

See what our games are coming over the horizon with our list of upcoming PC games.

With players taking the role of ship captain, battles in Abandon Ship involve micromanaging your shipmates, constantly repairing your vessel while also dealing constant damage to your enemy. It’s a delicate balancing act, as players need to switch focus between firing their cannons,fixing hull leaks and fending off enemy pirates who may be jumping on board.

The ship in the trailer is designed for close combat, utilising boarding hooks and short range cannons to decimate the opponent once it has gone in close and rammed the enemy craft. While effective in calmer waters against large vessels, this tactic falls apart in rougher weather, as seen later in the footage. One of the more reliable strategies is fitting out your ship with giant crossbows, allowing you to snipe out enemy crew members and limiting their ability to repair. By having one person sniping out sailors, the rest of your team can pile on damage with cannon and mortar fire.

Weather does play a major part in combat, with rainstorms making flaming weaponry all but useless. Lightning strikes can start fires and if conditions get really rough, tidal waves can knock some shipmates overboard. Players must master bracing for impact in these turbulent conditions, as a failed brace could mean losing your ace navigator to Davy Jones’ Locker.

Abandon Ship lacks a solid release date at the moment, but keep checking its Steam page to see when this pirate RPG will be coming into port.