It’s hard to imagine a premise that screams 2016 more than Absolver, a meditative melee game that marries the complexity of Souls to the simple, airy aesthetic of a Last Guardian or Abzu.

Devolver took a spot on our round-up of the best indie games on PC.

But, culturally savvy though studio Sloclap clearly are, it’d be wrong to credit these former Ubisoft Paris developers with preternatural foresight. The project began just last year, and only a period of accelerated development saw it become the toast of publisher Devolver’s E3 winnebago park in June.

This is a martial arts game where you raise your fists and read your opponent. Though every fighter’s face is covered by a dome halfway between a hockey mask and a rice bowl, you can discover their intentions by watching their hands – encased in leather gloves or bound tightly in hand wraps – and responding with a block or punch as appropriate.

In that way it’s a lot like For Honor, triple-A’s 2016 experiment in positional combat. But where Sloclap’s onetime colleagues at Ubi have swaddled their systems in siege spectacle, Absolver doubles down on its pugilism.

The direction and nature of your first attack in a series of kicks and punches is crucial – because it determines how you can follow up. And you’re encouraged to tinker with the precise make-up of combos outside of battle, choosing exactly when in a flurry of blows you’d like access to which moves.

It’s a deep dance of stances, and requires a clear and uncluttered style to match. No explosive visual kapow can risk obscuring the giveaways players glean from their opponents. 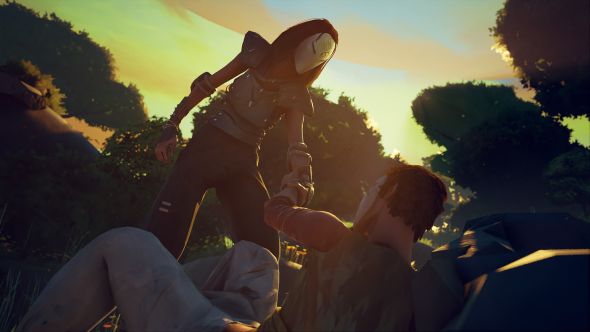 “All the visual effects have a gameplay purpose, and are used to give signs and feedback to the players for them to act on,” explains de Margery. “We avoid anything that is too gratuitous.”

Nor can animations overstay their welcome – anything indulgent or inessential is jettisoned.

“The dynamics of our animations are slightly accentuated,” says de Margery, “to reinforce the choreographed aspect of combat. In a game where reading the first frames of an attack correctly can make the difference between life and death, it is very important that we control how readable the movement is.”

It’s been a complex process, enabled by access to Unreal Engine 4’s source code. And when fistfighting your way through a stage, you’re likely to spot evidence of another piece of complicated coding. On other levels of verticality, visible from your perch in Absolver’s decaying ruins, players grapple in their own pugilistic scraps for survival. Matchmaking is seamless. 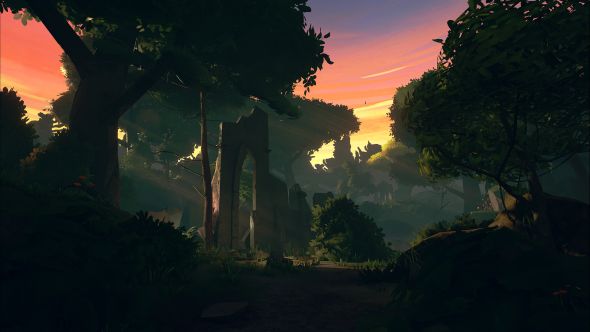 “Working with Unreal allowed us to access and modify the code of the engine to fit our precise needs,” says de Margery. “Additionally, the Blueprint interface allows us to prototype and implement features very easily, empowering designers to move forward without necessarily needing gameplay programmers to support them.”

Absolver’s art team, too, has a distinctive voice all of its own: sharp edges, martial clothing, a blazing sun. Slocap’s iteration led to a simplification of shapes and textures they believe balances the competing elements on-screen.

“This is a game about the essence of movement, something that is pure and elegant, and we thought that having a stylized art direction was the best way to express this,” de Margery expands.

“Also, having simplified shapes and graphics is for us a way to reinforce the fantasy and allow the players to project their own imaginations in the game’s visuals.” 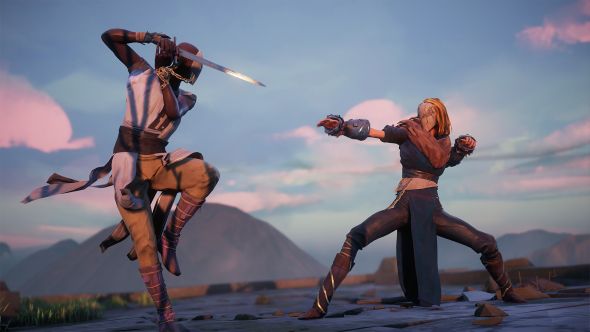 That ambiguity is tangible in the Absolver environments shown to date. Their sandy, hollow buildings suggest history, but offer no explanatory plaques or audio tours. As players progress through the game, they’ll be searching for knowledge themselves – dusting off the world’s past, exploring its present, and coming to understand the “natural and human rules it operates under”, as de Margery cryptically puts it.

Some lore will unfold in interactions with NPCs, but still more will only ever be implied or telegraphed through item descriptions. The effects of those masks remain a mystery, for instance, though we know they’re “both a blessing and a curse” and that the fighters have volunteered to wear them.

“Our game is very much about meeting other players seamlessly in the world, and the stories that emerge from these encounters,” points out de Margery. “Choosing a mask is therefore a way for players to construct their identity, and project it to others – masks are very expressive, and therefore a great tool for online roleplay.”

Everything in Absolver is there for a reason – and players will gradually wrap their heads around its desolate lands as they wrap their hands around its strange, blank people. Although, as de Margery promises: “Some things will probably remain mysterious…”

Absolver is slated for release in 2017. Unreal Engine 4 development is now free.

In this sponsored series, we’re looking at how game developers are taking advantage of Unreal Engine 4 to create a new generation of PC games. With thanks to Epic Games and Sloclap.