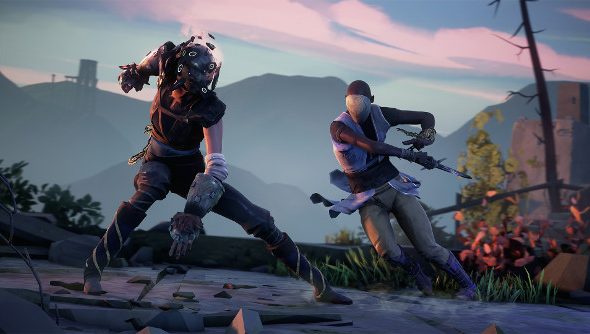 Devolver Digital have picked up another odd-seeming, exciting-looking indie game in the shape of Absolver. It’s a third-person fighting game of sorts, pitting your skills, wits and martial arts loadout against either online opponents or a series of PvE battles as you delve into the dungeon mines of a fantasy world. It’s in the early stages, planned for release in 2017, but already looks appropriately biff-worthy in the first trailer.

Could it grow to be one of the best indie games available?

Prepare to be kicked in the head to a rather lovely soundtrack.

Looks nice, eh? It’s developed by a French studio named Sloclap and puts you in the role of a Prospect, a group of recruits for the titular fantasy organisation the Absolvers who try to maintain stability in the world. You’re adventuring around, beating NPCs and other players online to learn new fighting styles in what is a real-time battle system of attacks, dodges, feints and counters. All of that is, naturally, customisable.

“We think the world would be a much better place if there were no guns. Then we could finally focus on important things, like sword fighting and how to kill a man with one punch,” said creative lead Pierre Tarno of the game. Meanwhile Devolver Digital definitely-real Chief Financial Officer Fork Parker pointed out that market research has identified that everyone wants to punch strangers over the internet, which is fair enough.

There’ll be more info at E3, including a live gameplay stream on the Twitch, er, Twitch channel at 5pm Pacific (1am British, 8pm Eastern) on June 13. For more, head over to the official site or Steam page, but you’ll be waiting until some time in 2017 to play it.