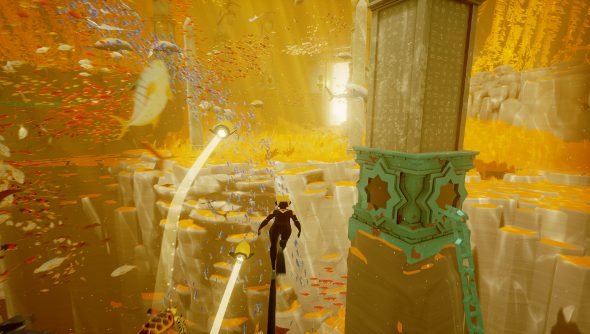 Abzu is a panacea for stress; a serene swim through an impossibly gorgeous underwater realm that teems with life. It’s a game made for tourists, largely bereft of obstacles and real threats, but its compact yet diverse pockets of ocean are rich in head-turning sights and sunken ruins, beckoning explorers.

You can tell that the team at Giant Squid Studios is run by an artist. Throughout the journey (just a lowercase j this time), Abzu unveils striking moments of beauty and stunning set pieces, always revealed in a such a way that the impact is as big as possible.

Narrow canyons lead to gargantuan, seemingly infinite expanses of ocean where the largest creatures in the sea live. Above a dark, empty chasm, thousands of fish coalesce into a single, spinning entity, shepherded by hungry sharks who dash in and out of the cyclone, biting off chunks.

Your eyes are always being drawn to something – a natural wonder, an imposing temple, a gentle but intimidating whale shark. It’s eye-catching and alien, even though most of the underwater denizens can be found in our own oceans.

It’s a lively world, too. Fish, whales, crustaceans, and turtles fill the ocean and make it a vibrant, reactive place. A pair of manatees glide through a forest of kelp, which parts as they cut through it. A crab relaxes on the seabed, but quickly scarpers under a rock when anything gets close. Everything moves and acts procedurally. 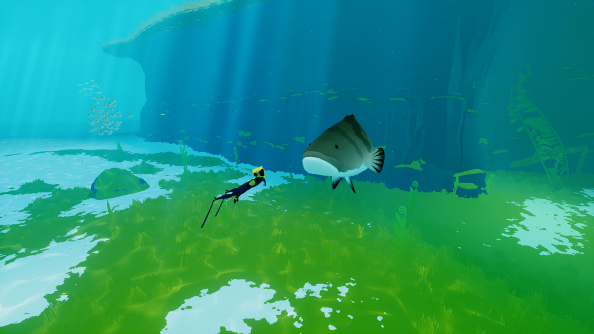 There is no health bar, no oxygen tank that needs to be refilled, and no energy meter forcing limitations. Struggle and death aren’t things that the Diver – Abzu’s quiet, enigmatic protagonist – needs to concern his or herself with. There is, however, still some tension. Ancient, monolithic guardians can be found in some areas, for instance, and if the Diver gets too close to them, they get zapped and stunned for a brief moment. They still don’t pose much of a threat, though, and avoiding them is a simple task.

Otherwise, most of the tension comes from the atmosphere and Austin Wintory’s exceptional and varied score.This is a deliberately safe, welcoming place to inhabit. Despite being set in the ocean, it’s a well-lit world, where shafts of sunlight penetrate the water through gaps in the ceiling of plants, and the fauna is almost always friendly. Even the sharks. So friendly, in fact, that you can hitch a lift by holding onto some of the larger creatures, which doesn’t serve much of a purpose but is still unexpectedly delightful. 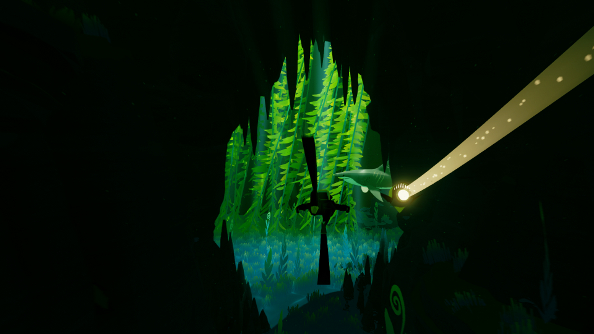 I spent a good five minutes swimming with a small shark as it darted in and out of a huge churning school of frantic fish, for no reason beyond the fact that it was a hypnotic, pleasurable way to kill a few minutes. And it meant I could just kick back and get swept up in the soundtrack.

That aimlessness does permeate throughout the game, though. There’s this incredible, well-realised aquatic realm, and not much to do in it. While I appreciate the lack of violence, there’s very little in the way of other interactions, either. There are no puzzles, no moments where you wonder how to get somewhere, and only a single path to follow. There are doors, however. A bunch of them. They’re locked and you’ve got to open them by turning two wheels. Always two. And they are always easy to spot. The first time it was a bit mindless, and doesn’t remotely deserve to be reused.

Early on, things are introduced that seem like they’ll be central to Abzu, but either fall by the wayside or don’t get satisfactorily expanded on. You dig a wee bot out of the sand, which then proceeds to follow you, bobbing around and leaving a trail of light behind it. What seems like a companion for the Diver is actually just a fleeting tool that can be used to remove a few obstacles, disappearing inexplicably whenever a new area is reached. 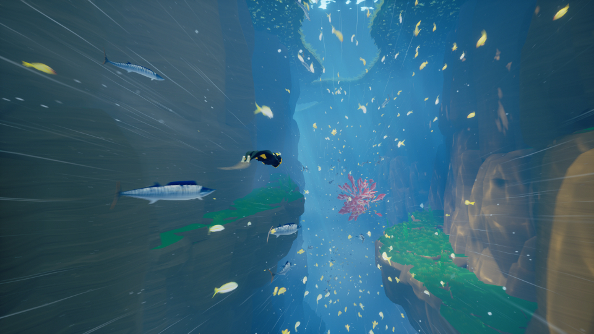 With the bot essentially being a key, that leaves the great white shark as the only other character in Abzu except the Diver. But their relationship is stuck on fast-forward; it leaps rather than grows. It crops up several times during the adventure, but the limited interactions between the shark and the Diver, over what is a rather brief game, don’t really foster the connection that the pair are apparently meant to develop.

Then there are the meditation statues. These carved sharks can be found in most areas, and when they’re sat on you can hit the meditate button and awkwardly explore all the sealife in the area. The camera zooms in on a fish, displays its name, and then with the thumbstick (a controller is very much recommended) you can shift the view to the next one. It’s incredibly imprecise and has none of the grace found throughout the rest of the game, as the camera careens and jumps between creatures, clipping through geometry, before getting momentarily trapped in a shoal of tiny fish.

I confess that none of this stopped me from spending quite a bit of time meditating and then losing myself down a Wikipedia rabbit hole as I swotted up on some of the weird fish I’d discovered, like an incredibly lazy Jacques Cousteau. 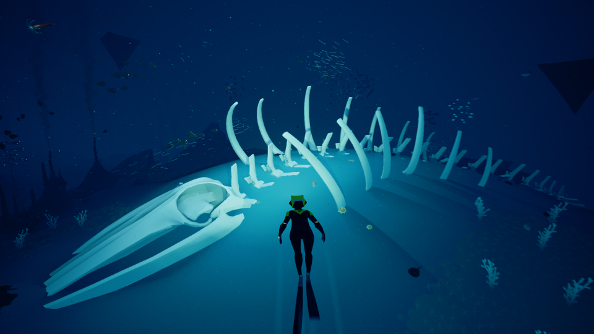 It’s slight, then. Very slight. But that’s not to say it’s nothing but eye-candy and fish. There’s history and mythology waiting to be explored by charting the aforementioned temple ruins, which hide large works of religious art and hieroglyphs hinting at the Diver’s task. It’s archeology without all the digging and cataloguing of a thousand broken amphorae. The story that Abzu silently tells is open to interpretation, though the themes of rebirth and creation are especially dominant.

With everything unspoken, Abzu expresses itself subtly with light, and more overtly through the clash of technology and mysticism, the result being that – at least after a single playthrough – one gets a sense of Abzu rather than a complete picture. It inspires a second holiday. And certainly, the gentle, laid back Sunday afternoon pace and uncommonly beautiful vistas encourage another helping too.

There’s a thin line between minimalistic and shallow, and Abzu does sometimes skirt it, but the hypnotic rhythms of the ocean are a powerful lure. I was transfixed throughout the entire swim, and so thoroughly relaxed that I decided that it was perfectly acceptable to free my feet from their sock prisons and rest them on the coffee table for the duration.

I also rode a manatee, so I can strike that off the bucket list.