The Ace Combat series has nailed the sweet spot between arcade and flight simulation. You can master its modern and near-future jets without reading a dictionary-length user manual, and still feel like you’re controlling the aircraft. Other flight games that lean too far into the arcade can leave you with the sense that you were on rails the whole time.

Flight games used to be the bread and butter of PC. Combat Flight Simulator, Crimson Skies, F-16 Fighting Falcon, and a string of other titles were released in the ‘90s and ‘00s before largely drying up as the audience for mass market flight games moved elsewhere. Ace Combat 6: Fires of Liberation never made it to PC, but Ace Combat 7: Skies Unknown did – it’s the first triple-A flight combat game on PC in ages, and so that’s reason enough to be excited about it.

You can read our Ace Combat 7: Skies Unknown PC review here. But if you’d also like to bolster your hangar of plane games then we’ve got just the list for you below. In some cases we’re looking at games that are a little more accessible than Ace Combat, in others we’ve gone in the opposite direction and suggested full flight sims. And one, well, one game doesn’t involve flying at all.

Let us know if there are any other games like Ace Combat you would recommend. 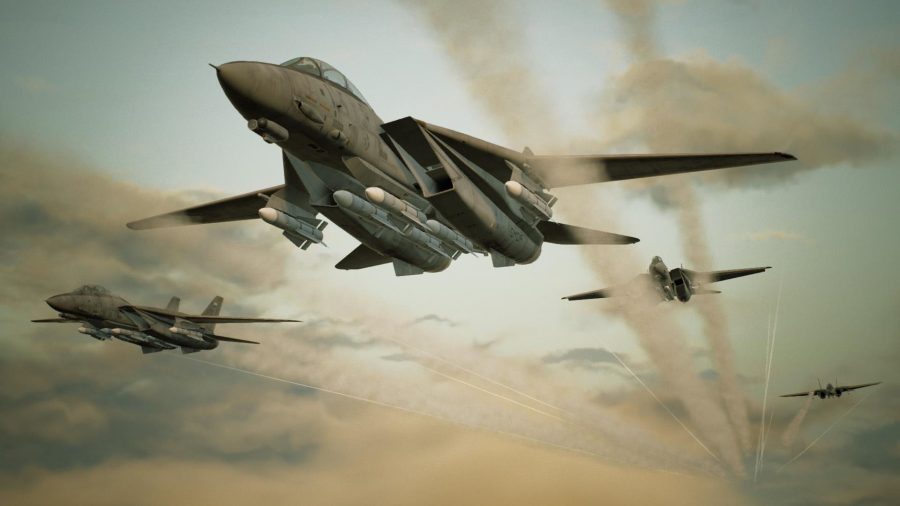 We’ll start with the obvious one. It’s not quite as special as the Xbox exclusive Ace Combat 6: Fires of Liberation, but it does have its moments. In a flight simulator you might be playing for a hundred hours before you have a thorough understanding of a single plane. In Ace Combat you form that affinity within the first hour of playing. What makes the game thrilling is that, from the fourth mission onwards, every scenario could feel at home in an action movie.

Find and destroy supply trucks that only sporadically appear on your radar because you’re in a sandstorm. Bomb mountain-top radar stations protected by long-range missile turrets that target you as soon as you fly above the low-lying clouds. There’s even one mission where you have to provide ground support for a VIP driving through a city in the middle of a battle, all without a functioning targeting computer. 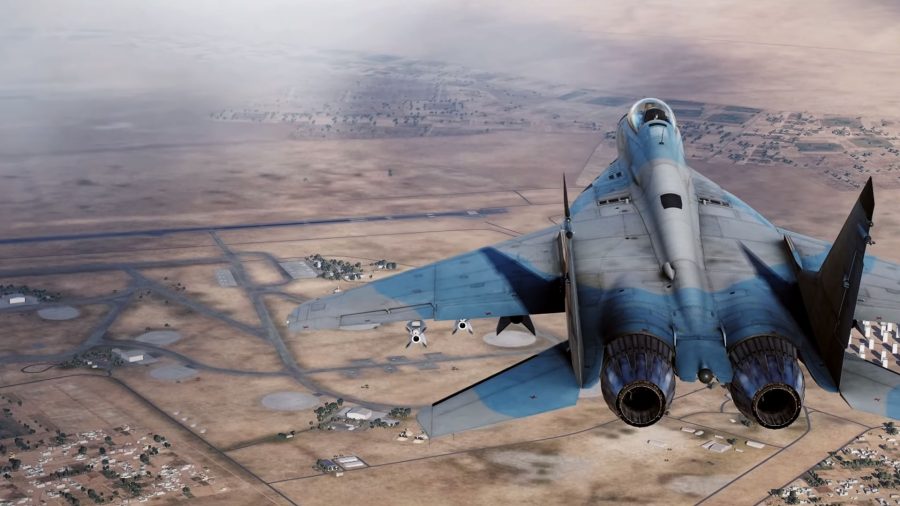 Ace Combat leans towards the arcade with its dogfights. It makes for great, fast-paced missions and immediate explosive action. If, however, you’re looking for something more complex then DCS World could be for you. It’s a flight sim with a manual so large it could crush a duck and a control scheme that seems to think you have three extra hands going spare – just getting the plane off the runway is an achievement.

But, if you can master the basics, DCS World offers a huge amount of play. The base game is free but can be expanded with a slew of painstakingly recreated planes. Each new plane is a challenge to be mastered and will behave radically differently in combat.

If simulation-heavy aerial combat is your thing, you may never need to reach for another flight game again. 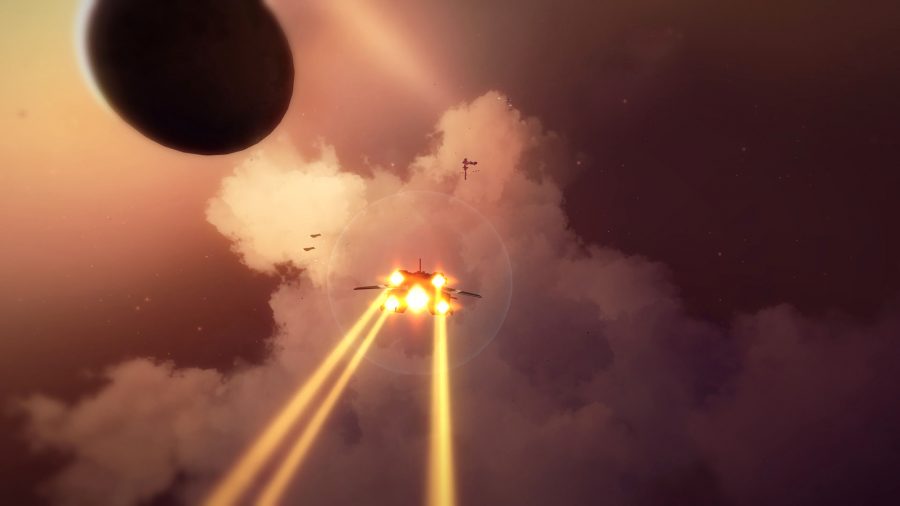 House of the Dying Sun

At the heart of Ace Combat’s appeal is its dogfighting. Those brief windows when you’re tailing an enemy plane, fighting to keep your crosshairs on the target, or when you’re the prey and trying to pull your plane out of danger. Those are the times when the adrenaline flows and the world falls away.

Related: Launch into the best space games on PC

House of the Dying Sun, while set in space, captures those same moments of aerial cat and mouse. You sit in the cockpit of a space fighter, frequently pitted against ridiculous odds, and only able to pull through with excellent piloting and a practised trigger finger. 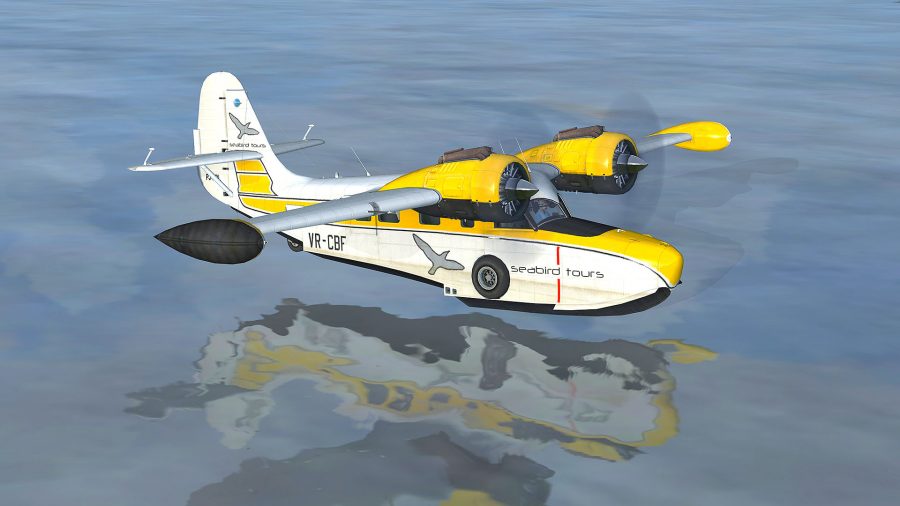 If you’re looking to scratch that simulation itch but without the added pressure of AI pilots trying to shoot you out of the sky then Microsoft Flight Simulator X may be for you. Like DCS World, controlling your aircraft is significantly more involved than in the Ace Combat games, however you’re doing it in a world without missiles and high calibre machine guns.

The scale of MFS X is pretty staggering. The entire world is open to you with a total of 24,000 destinations to visit. So once you’ve got to grips with the basics of flight there’s a huge amount to play with. There are stacks of DLC available to fill out the world with new planes, missions, and more detailed cities too. 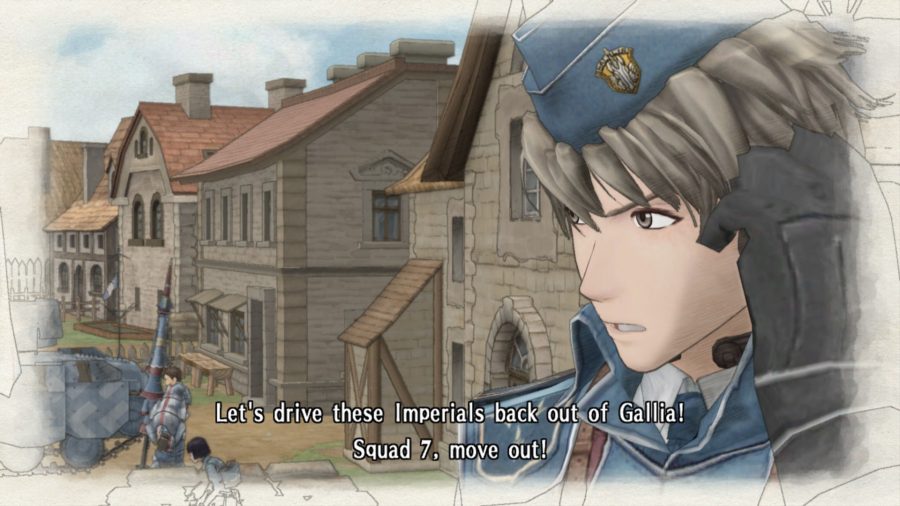 Ok, bear with me, I know that Valkyria Chronicles is not a flight game. It’s a turn-based war game more akin to XCOM than Ace Combat. However, a growing part of the Ace Combat games is the story of its pilots. You’re not just flying unconnected sorties in random airspace, your missions are part of a storied conflict and, as part of that, the pilots share their opinions on the war.

The storytelling in Ace Combat draws inspiration from anime series like Neon Genesis Evangelion, in which the cast question the morality of what they’re doing, and the effect it’s having on them as soldiers. Valkyria Chronicles eats at the same table so if it’s the story of Ace Combat that keeps you playing then it’s well worth checking out.

Read more: Take a look at the best strategy games on PC

On top of all that, Valkyria Chronicles is simply one of the best turn-based strategy games on PC. 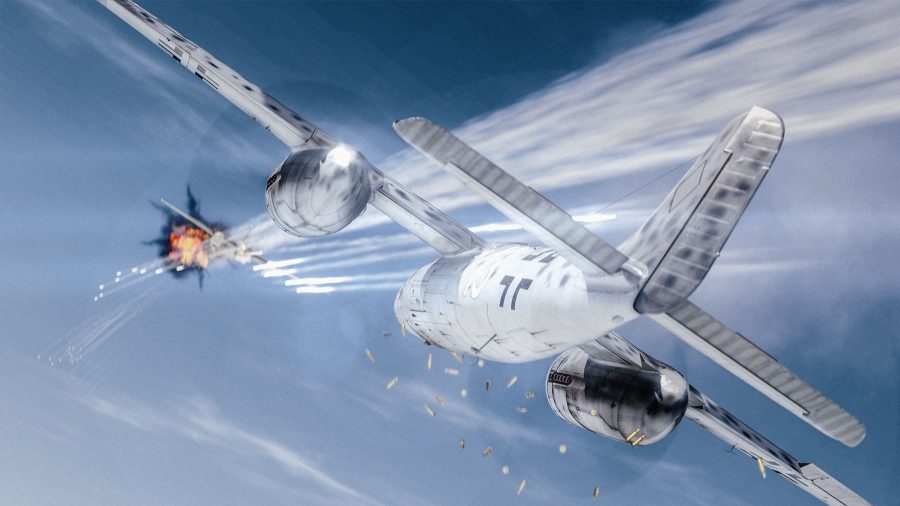 If you’re looking for straight up arcade flying then free-to-play dogfighter War Thunder is worth booting up. The World War II multiplayer game puts the emphasis on dogfights and accessibility. There’s no need for a HOTAS joystick set as you can pilot your aircraft competently with a gamepad – the physics model is generous, allowing you to pull off barrel rolls and loop the loops without much risk of stalling out. Plus, there’s a ton of different vehicles to play with so you should be able to find the vehicle that fits your style.

While War Thunder lets you take the wheel of ground vehicles and the tiller of ships, War Thunder started out life as a combat flight game, and that’s still where it’s most satisfying to play. 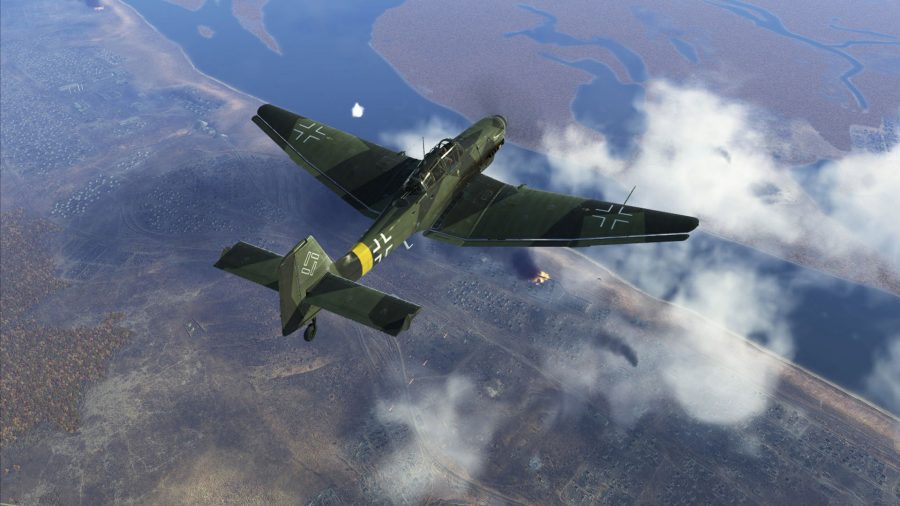 If you want a game that has flight sim chops without going as full bore as DCS World – but still has a full flight manual for you to digest – then set your sights on IL-2 Sturmovik. Set during World War II, above the skies of the besieged Russian city of Stalingrad, you pilot lovingly recreated era-specific planes as they shoot holes through one another.

Ace Combat finds thrills in modern aircraft, kitted out with heat-seeking missiles, radar-guided rockets, and laser-targeted bombs. IL-2 Sturmovik is a simpler affair. These planes weren’t fly-by-wire; their flaps were physically moved by the pilots pulling levers and pushing pedals. That’s reflected in the flight models, which can feel heavy when altering course, and a struggle to pull out of fast descents. 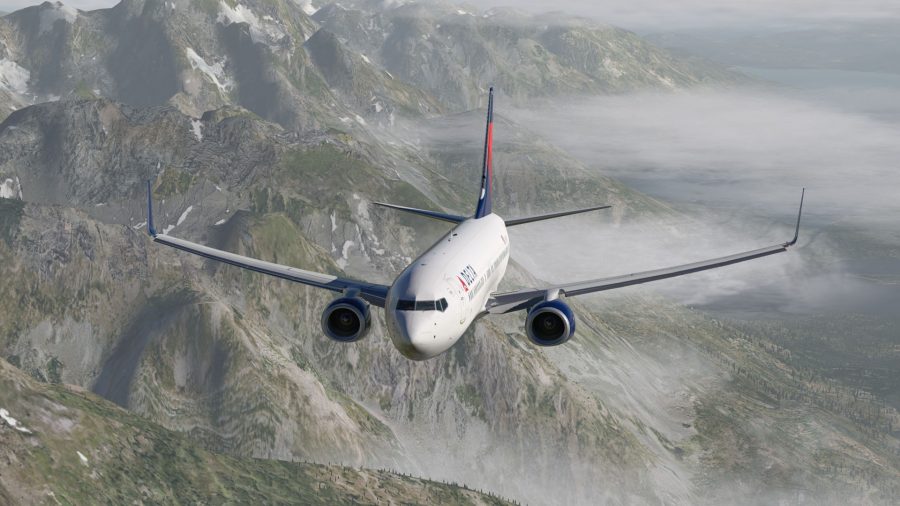 There are few flight games with the legacy of the X-Plane series. First launched in 1995, the simulator has been steadily iterated on for more than 20 years, making the latest iteration as feature rich as flight sims come.

Read more: Sink into the best simulation games on PC

X-Plane sets itself apart from the competition by actively supporting mods. It’s easy to add in new planes, scenery, and plugins. And because the game’s flight model works dynamically, calculating how aircraft behave by simulating the forces at work on each component, modded planes often work as well as the ones added by the developer. 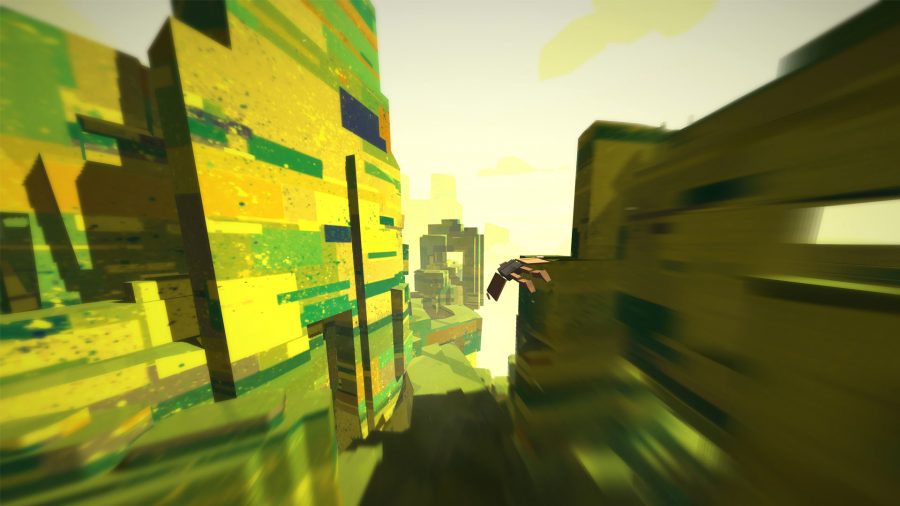 While you don’t pilot a jet in Superflight, instead slipping into the suit of a base jumper, it’s a game that taps into one particular joy of the Ace Combat series: daredevil flying. There’s great fun to be had getting your plane down low in a city and flying fast, tipping your wings to dodge a collision with a skyscraper as you escape certain death. In Ace Combat you might do this to lose a tail or to drop below radar, but in Superflight it’s for the sheer fun of it.

Superflight drops you into a procedurally generated, blocky level and as you plunge you’re pushed to fly your character as close to the ground as possible. As soon as you get close you start racking up points, so the closer you go to danger and the longer you stay there the higher the score you build.

If daredevil stunts are your thing then you should definitely give Superflight a look.