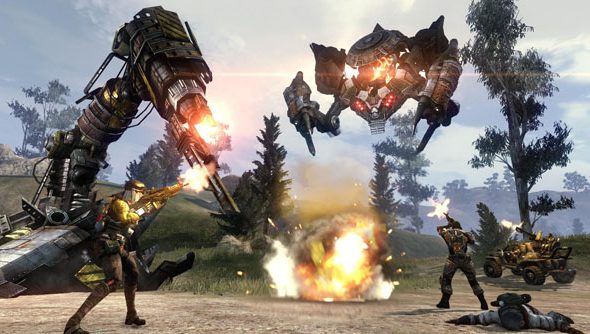 Defiance arrived last year as an MMO tie-in to the SyFy drama series of the same name, and begged the question: what if one flies while the other fails? We never got to know, as both parts of the would-be multimedia extravaganza dropped limply to earth after launch, clacking together like marbles in a net.

But now Defiance will have its chance to fly again, unshackled by a TV program nobody’s watching. It’s going free-to-play.

Defiance never had a subscription – but it’ll drop its one-time fee beginning June 4 on PC. Instead, Trion will introduce an optional ‘Paradise Patrons’ sub which provides boosts to levelling, skill, reputation and pretty much everything else – as well as discounts for the in-game shop.

Every player will be granted 30 free days of Paradise privileges come the switchover date.

Defiance was released on April 2 last year. By August, Trion had closed the San Diego studio responsible for its development.

Day-to-day live operations for Defiance have since been handled by the company’s main Redwood City studio, where it was managed alongside Rift and a vehicular MOBA – until End of Nations too hit the dust.

Trion’s great hope on the horizon now appears to be ArcheAge – the Korean MMO with an intriguing justice system.

“They’re people and they’re playing a game because they want to have fun, they’re not a frickin’ ATM machine,” he told PCGamesN. “I don’t like that attitude at all, and in the business world you can’t help but hear it. In the development team we actively fight against it.

“I mean hey, I want to have a job, I want to have enough money to pay my mortgage and feed my family and I love making the game and I want to continue doing that,” he added. “Obviously I want people to buy stuff but I don’t want them to ever feel like that’s why I want them in Rift.”

Rift’s free-to-play model has been unusually generous – though I have to say I’m a little more nervous about the particulars of Defiance’s two-tier system. How about you?