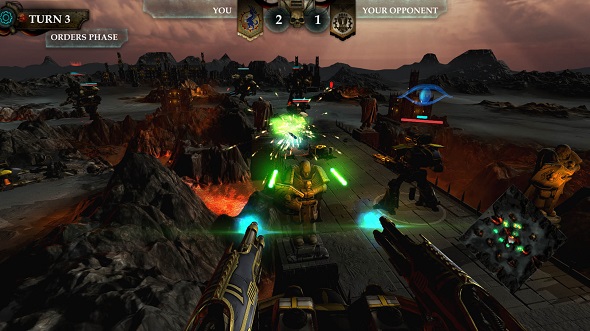 Space Marines, Ork shoota boys, Eldar wraiths – nothing but chaff before the might of Titans and Gargants. These towering war machines are the basis for Adeptus Titanicus: Dominus, which launches on Steam in Early Access next week.

Based on the 1994 Titan Legions board game from Games Workshop, Dominus has you controlling massive titan-class mechs in giant-on-giant turn-based combat.

Once the full game comes out, you’ll have your pick from factions including the Legions of Astorum, Gryphonicus, Crucius, and Osedax on the Imperium side, and Chaos players will be able to pick from Mortis, Vulcanum, Damnosus, and Fureans. Developers Membrane Studios also promise a full single-player campaign.

Now that you’re here, you probably ought to check out our list of the best strategy games on PC.

Titans have appeared in Dawn of War III, and in 1997’s Final Liberation, but this is the first time they’ve been the stars of their own videogame. The obvious issue here is that massive space titans seem a lot less huge when there aren’t ant-like soldiers around, but let’s let the trailer speak for itself:

Adeptus Titanicus: Dominus will debut onSteam Early AccessMay 31. You’ll be able to snap it up for $9.99.