When is it time to stop playing a strategy game? After just one more turn, of course! And then, maybe one more. And then one more…

I have fallen into the ‘one more turn’ (OMT) trap more times than I can remember. When I was young it was less noticeable, less important. It didn’t matter if I was up past midnight turning Alpha Centauri into a waterlogged, irradiated wasteland, if I could drag myself into school the next day. At university, with no parent to give me a morning prod in the ribs, Armageddon Empires, Galactic Civilizations 2, and Sid Meier’s Pirates! took a grade off my degree.

Post-university ambitions of writing professionally withered in the face of XCOM and a ROM copy of Warhammer: Dark Omen. Into the Breach was released after my daughter was born; I had to uninstall it because I couldn’t afford to lose any more sleep. Why does that happen to us? Nuking Gandhi at 3am is never worth the brain fog and headache when the sun rises.

Recently, I decided to do some research into what the problem might be, and how the structure of the brain means that certain people can be especially susceptible to the joys of strategy games. 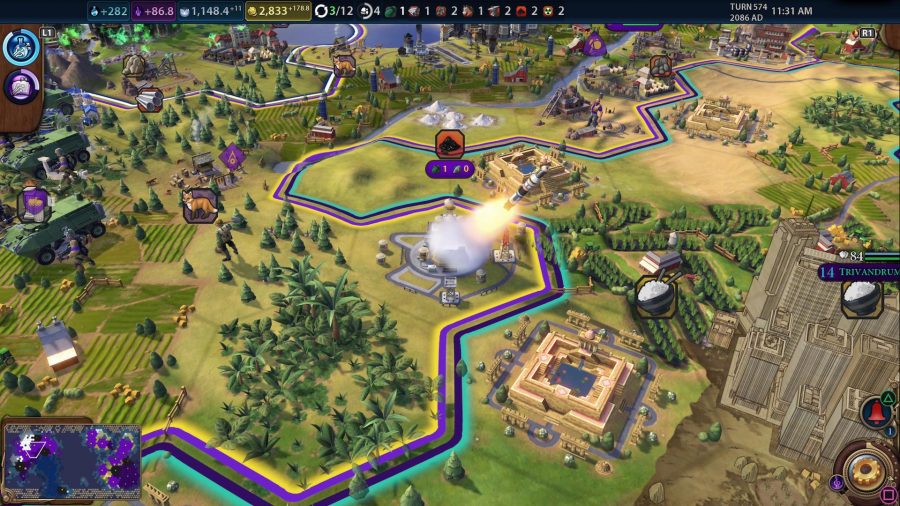 I’ve had depressive episodes and acute anxiety episodes throughout my adult life. I’d lose weeks at work to funks where I couldn’t make myself write a single word, or obsess over internet arguments or political farragos in a boiling cloud of stress. I tried counselling, I tried antidepressants, I tried therapy for PTSD. The funks and the fear remained. Eventually, I started researching the structure of the brain and what might cause the problems I have. That led me to a meeting with a psychiatrist in October 2020 who formally diagnosed something I had suspected for about a year: I have Attention Deficit/Hyperactivity Disorder.

I was as surprised as you might be to find out that ADHD affects around one in thirty adults. It’s the result of differences in the structure and function of the brain that become apparent during childhood: it’s a neurodivergence, like the Autism spectrum. Often it’s not diagnosed in childhood; about half the time it sticks around into adulthood. To sum it up in very simple terms, it affects the parts of the brain that control the ‘executive functions’ – neural processes including impulse control, short-term memory, focus, self-motivation, and more. They are the parts of your brain that allow you to ‘adult’. 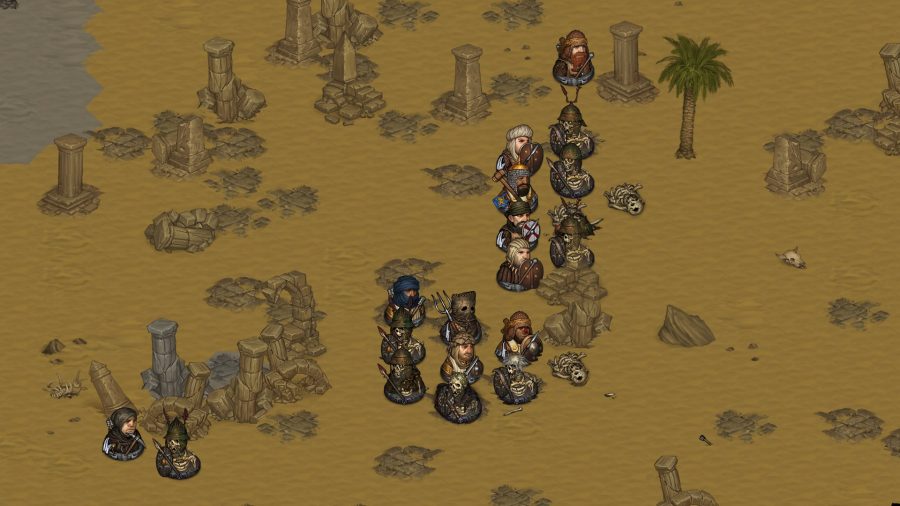 So, what’s my ADHD brain got to do with overdoing it on strategy games? Well, first let’s consider why anyone might fall into the OMT trap. It’s not because strategy games are especially fun. I mean, yes, they are really fun. But think about the kinds of fun you have with a good 4X or turn-based strategy game. There’s the intellectual puzzle of deconstructing an enemy front-line, as in Unity of Command, or in building a powerful and efficient economic engine in any 4X game.

If you’d like to know more about ADHD, the charities ADHD foundation and ADDISS have lots of information for adults, children and parents.

The website Additude publishes news and articles from people with ADHD and clinicians.

You might get an adrenaline spike from a close-fought Battle Brothers or XCOM mission, or from destroying a multiplayer opponent’s sun in Endless Space 2. But the deeper into an OMT trap you fall, the fewer mental faculties you have to enjoy those these pleasures. If I’m still clicking ‘end turn’ at 2am I am a husk of a man, running on fumes.

To get to those higher-order pleasures, like intellectual challenge or emotional catharsis, you’ve got to engage with lots of little pleasures that tickle the monkey brain upon which your more complicated human brain is built. Many tiny subconscious thrills come together to enrich the subjective experience of a game like Civilization VI: the little military drumroll that salutes your selection of an upgrade for a unit, the sumptuous nuclear mushroom that blooms catastrophically over an enemy city, even just the differently coloured numbers that tick upwards as you plunder the world’s gold and iron.

When the primordial ‘reward centre’ of the brain recognises or anticipates a reward, it sends the messenger chemical dopamine to the parts of the brain that motivate us to take action, to get us to secure the reward. This is exactly what happens to your subconscious brain when you play a videogame. But you’re not engaging with those rewards for a two-minute arcade game. You’re with them for hours, and there is a long-term effect.

Think about your long-term aims in Civilization. You have several construction projects on the go at once, each of which will mature into such things as banks or zoos or ships. You’re researching Military Engineering so you can build roads up to the edge of territory you share with an enemy. Your scouts are auto-exploring the edge of the known world in search of the remaining uncontacted civilisations, while your spies are fomenting unrest and plotting gallery heists and assassinations in hostile cities.

On any turn, any of those things could come to fruition and reward you with some satisfying little ‘ding’, or a new resource, or a well-earned victory. There’s a huge, unguessable buffet of rewards ahead of you, waiting to ripen. You sowed its seeds yourself while playing the game. 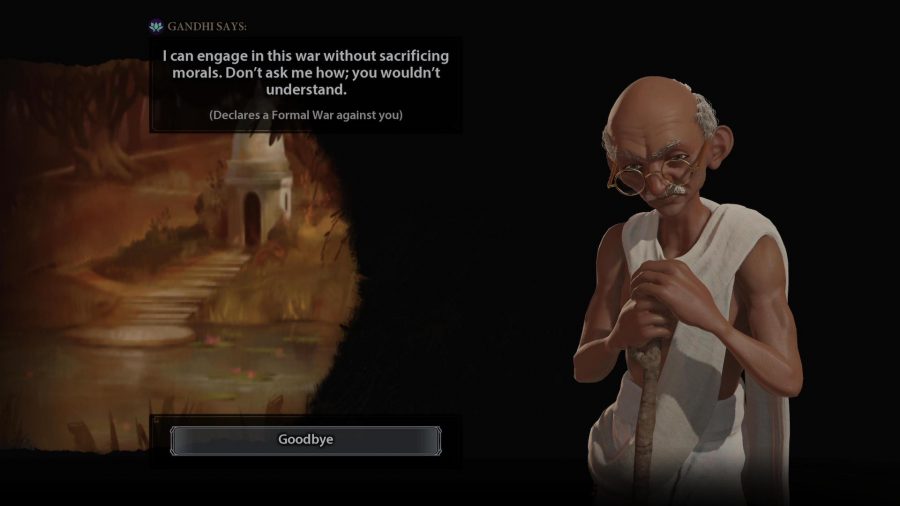 What effect does that exposure to an unpredictable, unending schedule of rewards have on us? When I started investigating ADHD I began to look under the hood at some of the systems that make us motivated. Those systems explain what’s happening to the animal parts of our brain when we hit the OMT trap.

The brain is adaptable. If it discovers that behaving a certain way in response to a stimulus might reward us, it will strengthen the dopamine pathways that compel us to repeat that behaviour. We experience the compulsion more powerfully, or need less stimulation to trigger a response. It’s a great evolutionary adaptation that can increase chances of survival. But this same flexibility can be trained just as easily to keep you playing a videogame long past the point when your conscious brain has disengaged. In fact, the science of animal training says that the most effective way to train this system is to reward behaviours on a random (or unguessable) schedule – exactly what you put yourself through when you start playing Civilization VI.

A neural mechanism that made our ancestors adaptable and persistent leaves modern humans vulnerable to eight-hour XCOM binges. No matter how thoughtfully you start playing a strategy game, you can’t help but train your inner monkey to keep playing even after the higher-order fun runs out. That’s how the OMT trap springs on all of us. But why does it hit me (and about 3% of the population) even harder? 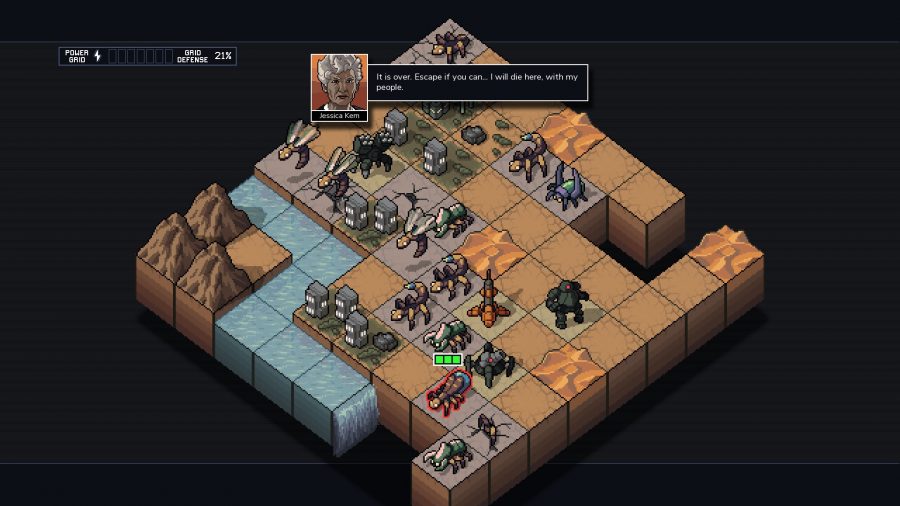 ADHD and the curse of One More Turn

The common stereotype of ADHD is a child who can’t keep still; hardly consistent with Into The Breach marathons. But hyperactivity is not always how ADHD manifests. Though no single brain difference is responsible for all cases of ADHD, as a general rule ADHD brains either don’t make enough dopamine, or don’t respond to it properly.

There’s a huge buffet of rewards ahead of you, waiting to ripen

People with ADHD are chronically under-stimulated, because the chemical that makes other people feel connected and engaged with their surroundings never shows up to party. This leads many of us with ADHD to seek external stimuli that can elicit any kind of dopamine response from our reluctant brains. That might mean physical activity, such as thrill seeking and bouncing off the walls like that stereotypical child. For me and for others, behaviours like spending, gambling, eating, and playing videogames fill the void.

For a typical gamer, the dopamine drip feed they get from playing a game with a compelling reward schedule might trick them into the occasional OMT binge. For someone with ADHD, the same game might offer their dopamine-starved brain the only source of motivation it will accept. The diminished impulse control that comes with our wonky executive functions doesn’t help either. In some regards, the brains of people with ADHD are similar to the brains of addicts, except that we’re not (necessarily) addicted to anything – we just start the day in withdrawal. Yes, it sucks. And it leaves us wide open to ‘one more turn’ strategy games. 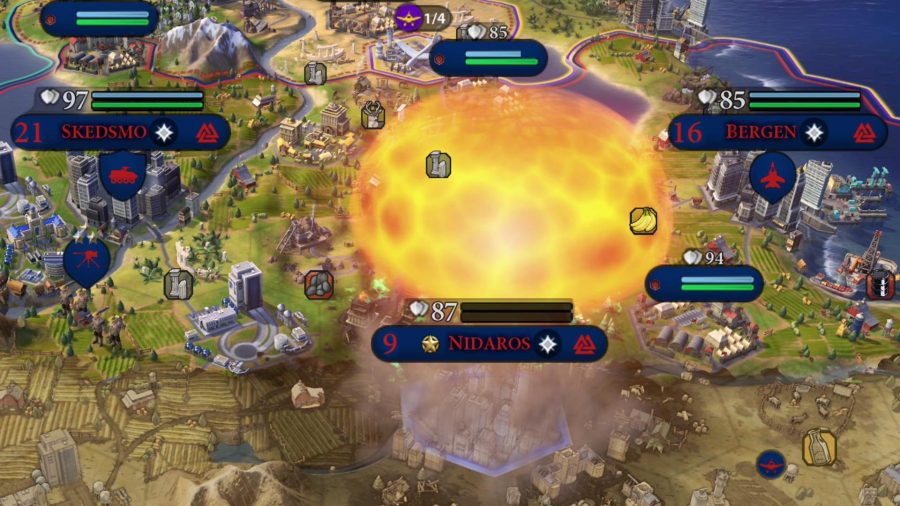 Most people who fall into the OMT trap probably don’t have ADHD. Sid Meier accidentally invented the digital equivalent of a punji pit, and it can snare any one of us. But if you’ve been repeatedly late to work, damaged relationships, or failed tests because you were awake at 4am obliterating star systems in Endless Space 2, it could be a clue that something in your life or your brain makes you extra susceptible.

In his books and his work as a cyber addiction support mentor, Kevin J Roberts emphasises that the destructive relationships his clients form with videogames are a response to other, unaddressed difficulties in their lives. Looking for answers might bring you new understanding about yourself and the support you need to thrive. It certainly did for me.

Pictures from Civilization VI graciously captured by my pal Stephen Marsh who is much, much better at it than I am. Header image from Scientific Animations image wiki. Boxout Image credit Wikimedia commons.