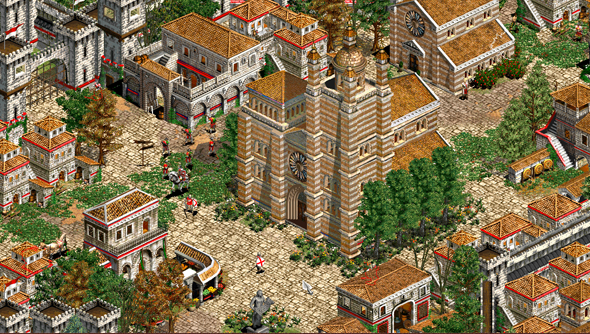 Age of Empires II’s been receiving some well-deserverd love in recent months. It’s been dolled up and remade in HD by Hidden Path who also completely shifted the game’s net code over to Steam so you can now easily play multiplayer matches again. Now the game will be getting a new expansion pack, the first since The Conquerors expansion released in 2000.

Better yet, The Forgotten was originally developed and balanced by the Age of Empires community.

You’ll finally be able to play as the Italians, Indians, Slavs, Magyars, and Incas.

The four campaigns still sound as good as they did when first announced in August:

The trauma of the Hun invasion in the 4th century has shaped Alaric, the fearsome warrior king of the Goths. But can the beloved king secure a new homeland for his people in the territory of the collapsing Roman Empire?

Always hungry for glory and wealth, Sforza wanders around 15th century Italy, offering his services to the highest bidder. Will he pick the right battles or make the wrong enemy? Take the fate of the young mercenary captain in your hands.

400 years after the collapse of the Roman Empire, Italy is still up for grabs. Relive the tale of the port city Bari from the point of view of a Byzantine family, rising from the common soldiery to the nobility. Beware, for not only Bari is at stake, but also control of Southern Italy.

History forged an incredible legend around the man who ruled Wallachia in the mid-14th century. Holding his ground against the vast armies of the expanding Ottoman Empire, his cruel tactics made him the most feared man in all of Eastern Europe. Shall his thirst for blood and the loyalty of his soldiers hold the Turks back for good?”

There are no details on the expansion’s pricing, yet, but when we know we’ll get you updated.