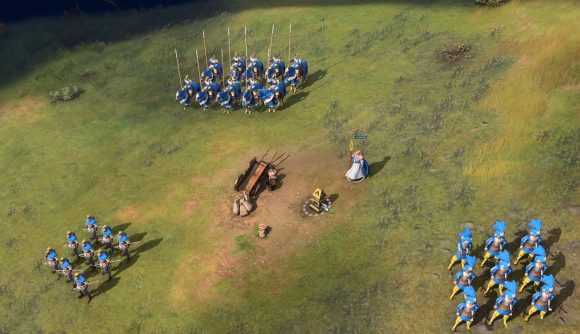 The next patch for real-time strategy game Age of Empires IV will be available January 19, and it’s making some small but impactful changes. In addition to a balance pass on most of the strategy game’s civilizations, it’s also reducing the amount of time you’ll have to wait for a multiplayer game by making its matchmaking system a bit less picky.

The developers at Relic and World’s Edge say they’ve been keeping an eye on matchmaking queue times, and they’ve found that the system is a bit too discriminating – it can take a few minutes before it settles on another evenly-skilled player. In the upcoming patch, the developers have sped up the time it takes for the matchmaking system to broaden its search to a wider pool of players by 67%.

Not everything is speeding up, however. Scouts across the board are going to be 35% slower while carrying animal carcasses, and the Rus’ warrior monks are getting slowed by 25% whilst carrying relics. The devs say this should open up more counter-play options, and it should at least have the effect of making scouts less reliable as a source for food in the early game – they’ll be vulnerable if used for this task.

Horsemen from tiers II through IV are getting a buff of +1 armour per level. The devs say that cavalry are meant to be a hard counter to archers, and the lack of additional armour was making it difficult or impossible for them to close the gap before being picked off by arrows and bolts.

Another important set of changes is coming to the Chinese fire lancer unit, which will cost 120 food, up from the 80 food it costs now (that’s in addition to 20 wood and 20 gold, which remain unchanged). The unit is losing its bonus against ranged units, too, and the devs hope the combination of changes will make it less cost effective and thus, less overpowered.

Relic and World’s Edge say they’re already working on February’s patch, which will include more feedback from the player community and heap some attention on the Abbasid Dynasty. The full patch notes have more details on this week’s update.