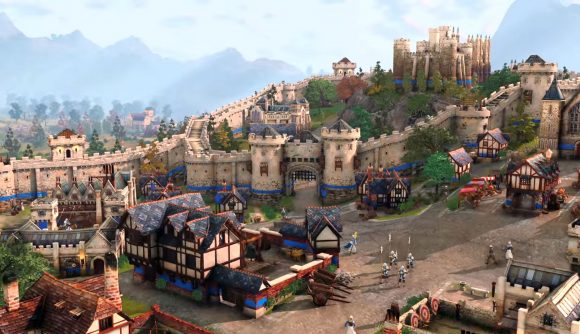 Age of Empires IV finally got a gameplay reveal trailer at XO19 last night, and it confirmed that we’ll return to the Medieval period – the same setting as the series’ most popular entry, Age of Empires II. But that doesn’t mean we’re getting exactly the same experience.

“Our time period is the Middle Ages, but it’s slightly bigger – on both ends – than the time period from Age II,” creative director Adam Isgreen tells us. “So we start a little bit earlier than Age II’s time and we go a little bit further, kind of bumping up against the early Renaissance. We’re not going to give you specific dates, because then people would be like ‘ohmygod the campaigns must be this if the dates are this’, and we’re not talking about campaigns. I’d love to, and I could, but I’m not allowed to.”

Age of Empires II’s four ‘ages’ were the Dark, Feudal, Medieval, and finally Imperial Ages. It’s tough to date the game more precisely than this – although its single-player campaigns feature figures as early as Alaric I of the Goths (370/375-410) and as late as Francisco de Orellana (1511-1546), with battles as late as Noryang Point (1598), there’s definitely a sense that these are outliers, and the game’s systems are reaching a little in depicting them.

It’s exciting, then, to hear that Age IV is intended from the start to support events a little further back and forward in history. Further in the past, perhaps we’ll see more of Rome’s decline?

In the future, though, Isgreen’s comment is interesting in that Age II’s Imperial Age already resembles the early Renaissance to some degree, with widespread gunpowder units and such technologies as block printing, dry docks, banking, guilds, and chemistry. There’s not a huge amount to be gleaned either way from the reveal trailer, which looks to be solidly in the High Middle Ages:

We’ll have a full Q&A of our interview with Isgreen and Xbox Entertainment Studios general manager Shannon Loftis on the site shortly, so check back soon.

The Age of Empires 4 release date isn’t yet confirmed, but we’re guessing 2020 with reasonable confidence.