So, you want to know how to pay tribute in Age of Empires IV? Paying tribute is something you may encounter quite a few times during the new RTS game’s campaigns, but it’s also something you can do in multiplayer as well, as it involves sending resources to other players.

In the second Norman Conquest mission, for example, you can use the mechanic to pay off viking raiders to stop them attacking you on your way to York. In the second Rise of Moscow mission, you have to pay regular tribute to the Golden Horde otherwise they’ll attack you with a strong army in retribution. Both instances place tribute as a crucial part of the mission, but if you’ve not had much time with the game you might initially be confused as to how you do this.

The first few times you’re asked to do this in the game, a tooltip does pop up to point you in the right direction. These can sometimes be easy to miss or click off, however, and that’s not taking into account anyone who’s turned off hints altogether. We’ve put together a quick guide on how you pay tribute in Age of Empires IV – we hope you find it helpful.

The tribute menu in both single-player campaigns and skirmish (solo or online multiplayer) is accessed via a button that’s in the top right of the screen. It doesn’t always appear in campaign missions – that will depend if the mission itself needs it or not, but it will be in the same place if present.

When you click on it, a small menu will appear showing all of the other players in the game. Again, in specific campaign missions, additional bespoke items may appear here as needed by the mission in question (such as in the second Rise of Moscow mission), but otherwise in skirmish it will just show the other players.

In order to send tribute to another player (AI or human), you need to meet the following criteria:

With regards to skirmish and multiplayer matches, this basically means you can only send tribute to members of your own team. You can’t send tribute to your opponents, and this applies in free-for-all matches as well. In campaign, the mission scenario itself will dictate who you can and cannot send tribute to, so you don’t need to worry about the criteria as much. 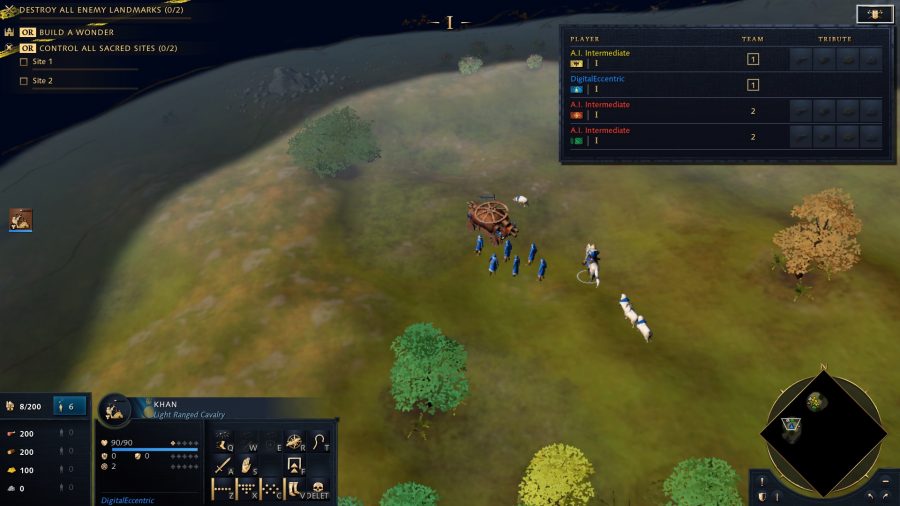 In the tribute menu, next to each player’s name will be four icons, one each for the main resources – food, wood, stone, and gold. Left click on one of the icons to add 100 units worth, and right-click to decrease by the same.

Once you’ve decided how much you want to send, you simply press the ‘send’ button, and the resources will be taken from your stockpiles and added to the recipient’s.

It’s as simple as that! If you’re looking for other advice, we’ve also got a guide to Age of Empires 4 hotkeys as well