There’s a lot to be said for our globalised modern world, but none of it is particularly positive for 4X games. The more connected and homogenised we become, the harder it is to make new discoveries  – likewise, the better we communicate, the less desire we have to take and conquer. For a studio like Triumph, which was founded on making games that satisfy our inner invader, drastic solutions become necessary.

Age of Wonders: Planetfall burns the routers, knocks the satellites out of the sky, and mothballs the interstellar shuttles. Technology that has united us and allowed us to explore the universe is destroyed. The Star Union, once a galactic empire that spanned many thousands of worlds, has collapsed, marooning its people on their individual homeworlds. Cut off from one another, they have evolved to become culturally unique: scavenging cyborgs, bioengineering amazons, and bleary-eyed expeditionary forces awoken from cryosleep.

The game begins just as hyperspace travel becomes possible again and these inward-looking people begin to find each other. And, er, perhaps blame each other for what went wrong with their empire.

Got a hankering for conquering? This list of the best 4X games should see you through ’til Planetfall’s release.

“It’s a great start for a conflict, but it also means that the worlds that you are visiting in this game are going to be filled with history, like the Roman Empire, with ruins and ancient droids everywhere,”Triumph StudiosCEO Lennart Sas tells us. “There’s loads to discover. Think Fallout on a galactic level.” 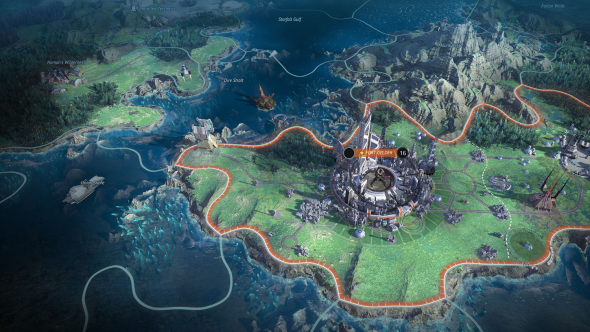 The goal is utopia, a new Age of Wonders, but there’s no harm in making the most of all the regrettable conquering and conflict that has to happen along the way. Each campaign has you resettle a single world, which is procedurally generated according to your inputs. Fancy a little less desert and a higher concentration of Imperial remains? There’s a planet to meet your exacting specifications.

Once landed, you’ll follow a formula of outward expansion familiar to the genre. The planet is divided – in squiggly, freeform fashion – into sectors. These named areas are dominated by cities, ruins, or geological features, and each has its own allure – a river delta might offer fertile wetlands, for instance, high in agricultural potential.

More outlandish sectors tend to yield stranger benefits. Come across the Xeno Life Institute, a remnant of the Star Union’s experiments, and you’ll be exposed to the dangerous results of genetic engineering. If you can beat those high-level enemies you can repurpose their tech to grow oversized space tomatoes for your people, increasing their strength. Another sector on the map Triumph demoed was taken up by the Crimson Euphoria Hotel and Spa – a sci-fi Las Vegas. The precise benefits of that one remain a mystery: a stag and hen do boost to your economy, perhaps? 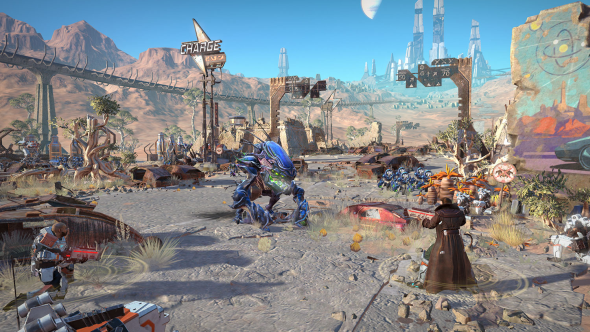 As your colony grows through the acquisition of sectors, you can start to run many cities at a time – more than you can feasibly defend yourself. Thankfully, each has a standing army, and creating a military garrison alongside them will bolster those defences. It’s good to know your people are protected should the worst happen – which, in Planetfall, means consumption by giant alien insects.

There’s a certain amount of choice involved in high-level management. Cities will grow at pace if their citizens are producing food – but if you send them to the factories, you’ll get that garrison in fewer turns, ensuring that city’s future growth is protected. On a higher level still, you can make tweaks to your economy using a kind of equaliser tool. But some of Planetfall’s most promising systems exist at the lowest scale on offer.

When diplomacy with other factions goes wrong, disputes are resolved in a very solid-looking turn-based skirmish mode. Units occupy a hex each, but where some 4X games are guilty of abstracting their combat to the point of tedium, Planetfall’s feels immediate. Terrain provides cover but can be taken apart by a hail of bullets; abandoned cars make impromptu area-of-effect explosives for shrewd commanders; units with overwatch are capable of locking down parts of the map. In short, Triumph have learned lessons from XCOM on high-stakes tactical battle.

“There are a couple of million people who’ve played XCOM games, so they know the core rules,” Sas says. “But the way we implement that is fairly different.” 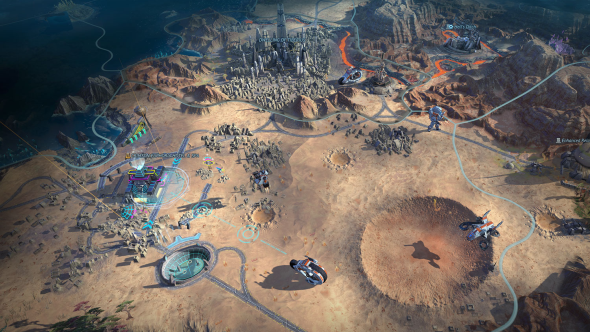 Planetfall’s combat is shaped by the wider context of its world. Battles resolve quickly because there’s a map to get back to. The body count tends to be high since soldiers are replaceable. And the units vary wildly in look and abilities, coming as they do from a wide array of races and backgrounds.

“One of the things that we did in this game was ensure to put a lot more technology and units into each race,” Sas says. “One of the criticisms of Age of Wonders 3 was that the races were a bit simple and bland.”

By the time Planetfall comes out in 2019, Triumph will have been making Age of Wonders games for 20 years. There’s evidence of their experience in new mechanics like grazing. They’ve learned that nobody can stand missing a shot, even when they’re overwhelmingly likely to, and so have introduced a chance of doing half-damage or causing an effect like bleeding. A consolation prize for your bad luck.

The studio has dubbed this early planet map Prealpha Demonis – there’s still a lot to work out about the final form Planetfall will take. Triumph is unsure, for instance, whether it wants to add an underground layer to their planets similar to Age of Wonders 3, or whether that’ll overload a game augmented by plenty of new considerations. But, already, Planetfall is an impressive example of the contemporary 4X genre, guided by steady hands and set in a world full of fleshed-out history.

“It’s science fiction that looks back very much,” Says says. “What what wrong here, and what can we learn from this?”