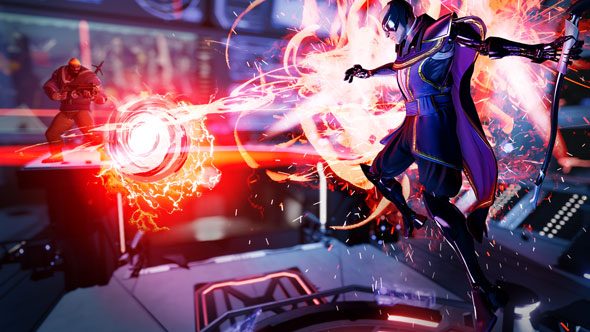 But when even something as zany as the latter-day Saints Rows starts becoming overly familiar, it’s good to shake things up while you’re still ahead. Which is where Agents of Mayhem comes in…

The game is Volition’s spin-off from the Saints Row canon, taking place in the distant future after the ‘recreate Earth’ ending of Gat out of Hell. Not that the backstory really matters, as it’s essentially an alternate dimension and there are only passing references to the mainline series, although a familiarity with its trademark self-aware, sarky sense of humour will give you an idea of the spirit of Mayhem. During my three or so hours with the game, I’ve mowed down waves of gun-toting robots as a minigun-wielding woman on rollerblades, fled giant space lasers beaming down at me from orbit, and gallivanted around a futuristic Seoul with an interchangeable squad of colourful, strategically varied characters that feel as much like they could have come from the Overwatch universe as Saints Row. 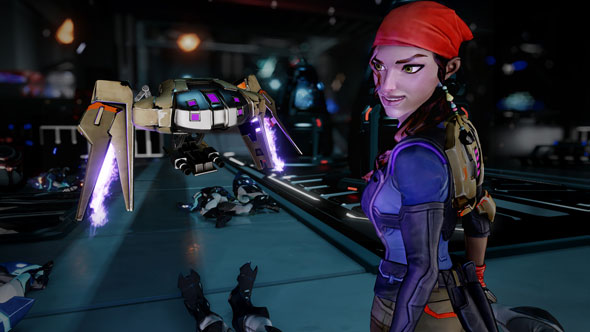 The main thrust of Agents of Mayhem is the tag-based squad system, where you select three characters for each mission, controlling one then seamlessly swapping them in and out with the others as the situation calls for. Each of them comes packing their own narrative and unique moveset, and not just any old combination of them will amount to an effective squad. I had a wonderful time with the drill sergeant Braddock, for example, who joined Mayhem to deal justice upon the soldiers who deserted her to join the baddies of LEGION. Her default firing mode is an assault rifle, which can become temporarily armour-piercing when you use her unique ability. She has an effective melee attack that stuns enemies, and her ‘Mayhem’ move, which only becomes available when you do a certain amount of damage, throws down a marker calling in an airstrike. Not the most imaginative character of the bunch, but a stable baseline.

Alongside her, I played around with rollerblading mini-gunner Daisy, shadowy archer Scheherazade who’s capable of firing infectious poison arrows, and Red Card, a German football hooligan-turned-superhero (whose moves I struggled with, perhaps making him more of an ‘expert’ character). Then, among others, there are the main characters who are central to the story: bulky harpoon-wielding Hardtack, dual-pistolling hacker Fortune, and Hollywood, the cocky Johnny Cage-like explosives expert. Each character has different bonuses against different types of enemies, so picking the right motley crew is a deceptively tactical process that takes a little bit of consideration.In the end, I settled on Braddock and Daisy as my mainstays (bolshy tomboys, it seems, are my thing), and experimented a little more with the final slot in my squad. 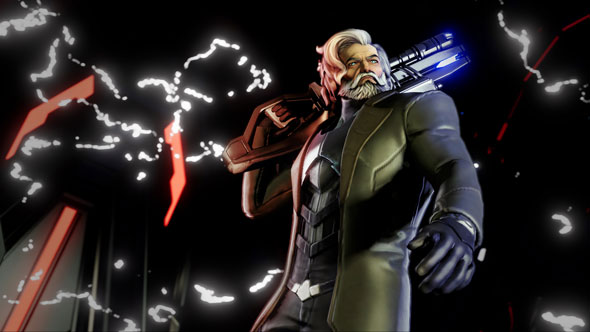 Combat is fast and riotous, not entirely unlike its daddy series, though beyond the explosive spectacle there are plenty of differences beneath the bonnet. The fact that you can see numbers popping off enemies as you pepper them with bullets is soothingly familiar to Borderlands and Destiny players, while the inclusion of dodging as a central mechanic is indicative of how combat, more so than willy-nilly goofing around, is at the heart of the Agents of Mayhem experience. Anticipating enemy moves and watching for those tells is crucial, so that you can evade their attacks then strike as they’re cooling down. Mix this up with the free-flowing switching from one agent to another, and you have an eclectic combat system that’s surprisingly deep as well as cheery good fun. At one point, for example, I managed to tag-team two agents’ moves: as Fortune I slowed down all enemies within a certain radius before switching to Braddock and calling in her Mayhem move airstrike to eviscerate the ensnared foes.

Having versed myself in the combat basics in the intro and origin missions, I was tasked with taking out a LEGION leader called Hammersmith – a name a Londoner like myself associates more with mainstream comedy acts than a Swedish weapons guru with an insatiable desire to test out his destructive inventions on the world. The first stage sees me driving through the city, attempting to evade the space lasers raining down from above while the softly-spoken English girl on the codec thingy figures out where the villain is hiding. The driving mechanics are, as you’d expect, focused more on speed, fast acceleration and momentum than brake-squealing, metal-crunching realism, though in truth being in a car in this game feels claustrophobic compared to being on foot. Why drive when you can super-sprint, triple-jump and teleport-dodge your way across the city? 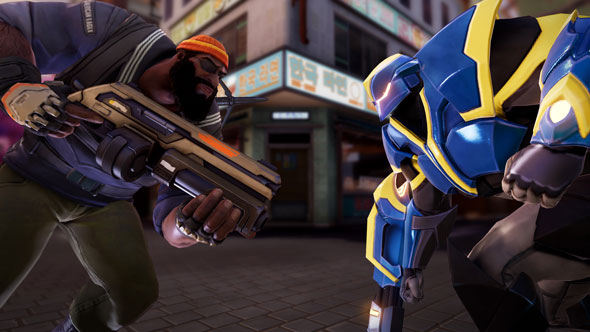 Several near misses later, I arrive at the place, an indistinct single-storey brick building, and scale the walls as Braddock before sniping enemies from neighbouring rooftops as Scheherazade (let’s just call her Ribena hood though, for ease). Upon discovering the secret switch on an amusingly vocal cowboy statue, a high-powered turret emerges from the ground, battering poor Ribena to near-death. I beam in Daisy, and brute-force the bastard thing by minigunning it from point-blank range. It explodes in seconds, and the path into the secret base clears.

Inside, it’s about as stock secret-basey as you like – all metallic rooms patrolled by tech-suited goons. I find Braddock, with her effective melee blade, works best for me in the close-up combat, Daisy minigun barrage at the mid-range, and Ribena’s archery at a distance, though in these confines the latter is very much negated. We work our way past the soldiers and turrets, disabling a giant laser-generation machine before getting through to the final chamber, where Hammersmith awaits.

The encounter consists of several stages of veritable absurdity. In the first phase, he flies around the arena on a platform Green Goblin-style, surrounded by a defensive energy shield, in the second you bat a giant energy ball back and forth in what’s essentially a high-stakes game of Pong, and in the final phase? Well, the game crashed, forcing me to skip on through to the concluding cut-scene (that’s one way of avoiding spoilers, I s’pose). 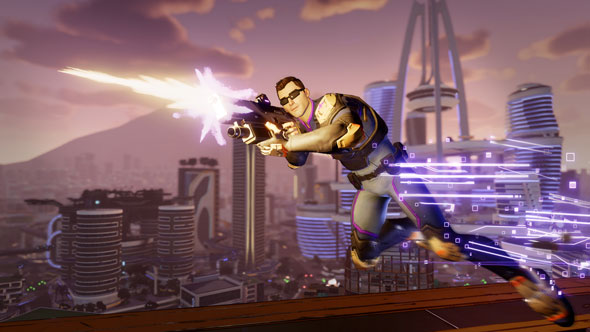 Something I’m wary of in Agents of Mayhem is that, amidst all its unquestionably fun fun-ness, the combat is of the sort that could veer towards a grind later on, as is the tendency with such openly numbers-based action games. Hopefully, enemy variety and interesting mechanical variations to their attacks become the main means of difficulty scaling, rather than bloated damage absorption. Volition tell me that much of the open-world action will entail capturing outposts and (more intriguingly) taking out enemy bases in procedurally-generated cave systems under the city. It will be crucial that these potentially repetitive encounters are made interesting, testing your growing mastery of the moderately strategic systems, rather than just your patience.

Not that a unique combat system is all Mayhem has going for it. Volition have built up quite the knack for creating two-dimensional but entertaining characters who, by means of excellent voice-acting and sharp writing, are good fun to be around – sort of like a group of mates who are a little cliquey and enjoy partying too much, but guarantee you a good night out. Agents of Mayhem seems to build on this, with its larger-than-life heroes introduced by ‘80s Saturday morning cartoon inspired cutscenes. The retro undertone goes right through to the art style of the game itself – a glossier, more comical presentation than the hyperreal stuff that came before. With that said, what I saw of the futuristic city of Seoul itself felt a little hollow – all clean, washed-out colours, generic vehicles and nothing in the urban landscape to really draw the eye. It was little more than a background for the innumerable action set-pieces to take place in.

But many of my criticisms of Mayhem were equally present in the Saints Row series, which was nonetheless a hit by means of its relentless whimsy. Agents of Mayhem maintains that element, while adding a vibrant mix of co-op-esque shooter and hero-shooter combat in there. It’s a checklist of Popular Stuff in Games Right Now, and the Saints Row faithful will likely be pleased with how this new game is shaping up. On the other hand, those who found the series’ cocky character a bit excessive may likewise struggle to find a way in here.