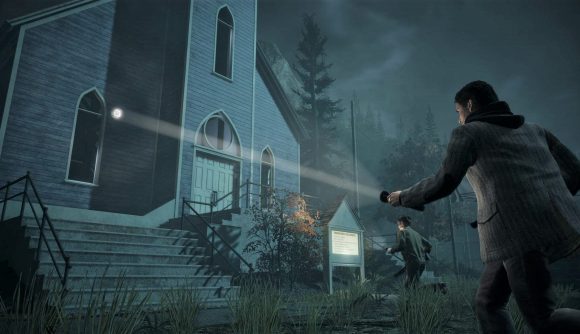 Remedy’s coveted Alan Wake Remastered is only a week away, and the cult classic has never looked better. From brand new textures to enhanced character models, visiting the eerie town of Bright Falls is sure to feel like a new but familiar experience. Thankfully, despite receiving an overhaul, the spruced up supernatural horror’s required PC settings aren’t as unsettling as the game itself.

If you’re planning on switching out the original Alan Wake’s 8GB install for the remastered version, you’ll want to free up around 36GB on your gaming SSD or HDD. While the remaster’s storage requirements are fairly average by today’s standards, the file size jump could catch you out, especially if your storage is dominated by other gaming PC giants, like Call of Duty: Warzone and Red Dead Redemption 2.

It’s safe to say that even if you’re rocking a slightly older rig, you’ll probably be able to run Alan Wake Remastered. Better still, all RTX GPUs have the potential to run the game at 4K resolution and 60fps, thanks to Nvidia DLSS. That said, if you’re still using a GTX graphics card as your daily driver, you’ll still be able to experience this new adventure, albeit with lower settings.

In addition to the specs listed below, you’ll also need an updated version of Windows 10 and DirectX 12 support.

Alan Wake Remastered comes without ray tracing support, so GTX users won’t have to deal with that kind of fidelity FOMO. Unfortunately, sticking to the game’s minimum and required settings will mean skipping out on Nvidia’s DLSS upscaling, which otherwise aids you in your attempt to boost fps at a respectable resolution.

On the AMD side of things, Alan Wake Remastered can run on an AMD RX 470, but recommends the more recent AMD 5600 XT. The game also doesn’t feature support for FidelityFX Super Resolution, AMD’s answer to DLSS, so Radeon cards will have to handle native resolutions while using traditional settings tweaks to tailor performance.