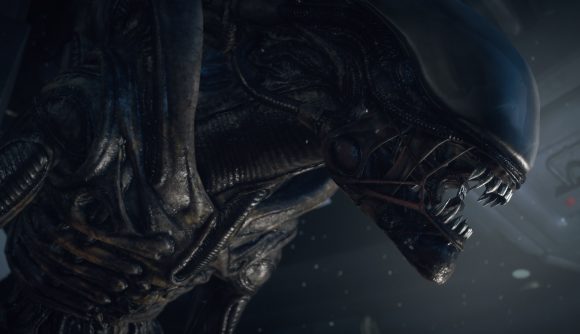 A new game set in the Alien universe will probably be announced at the Game Awards 2018, show founder Geoff Keighley has hinted.

In cryptic tweets about the awards program, Keighley posted images with the words “WORLDS WILL CHANGE” in a blue-on-black typeface that looks an awful lot like fonts used in the films Alien and Aliens. Keighley wrote that “worlds will change” December 6, the date of the Game Awards broadcast.

That’s not a lot to go on by itself, but fortunately for Alien fans, there’s more: a new trademark for a game called Alien: Blackout was filed this week by 20th Century Fox, as Dark Side of Gaming reports. The trademark covers computer game discs and software, as well as “providing on-line computer games… by means of the internet.”

We’ve known a new Alien game is in development for a while – earlier this year, we learned that FoxNext Games had purchased Cold Iron Studios to work on the game, which is rumored to feature a persistent online world.

Taken together, it looks increasingly likely that we’ll be getting our first look at Alien: Blackout at the Game Awards.

The Game Awards will kick off at 20:30 EST on December 6. In addition to recognizing awardees for Game of the Year, the show has been the venue for world premiers for videogame trailers. After getting thoroughly spooked by Creative Assembly’s Alien: Isolation, we’ll be watching closely for the next game based on the Alien franchise.