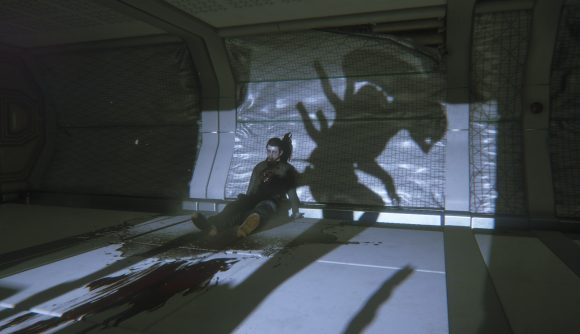 The official Alien Twitter account tweeted a cryptic teaser Friday, which shows a closeup of Amanda’s uniform, with an “A. RIPLEY” nametag. Around her neck, she’s wearing a nylon cord with a key attached to it. The audio is an unsettling loop with some kind of cry, culminating in the otherworldly snarl of an alien.

The teaser ends with the words “Who is Amanda Ripley?,” followed by “Read. Play. Watch.”

It looks very videogames, but to throw an initial bucket of cold water on any Alien: Blackout speculation that might arise from the tweet, it’s possible that this is referring to Alien: Resistance, a new mini-series of Dark Horse comics that’s due to hit shops January 23. The series stars Amanda Ripley, along with former Colonial Marine Zula Hendricks, and began with Alien: Defiance.

However, the last triptych of words is interesting:

The Alien account even hashtagged it, #ReadPlayWatch. (It’s like Eat, Pray, Love, but for when you’re being hunted by extraterrestrial superpredators). You can read a comic, and you watch a movie, but you play a game – and that suggests there’s more to this than a new comics mini-series.

Alien: Isolation is one of the best horror games on PC

20th Century Fox has been playing its cards close to the vest with Alien: Blackout. We know the company trademarked the game late last year, but rumors about a reveal at December’s Game Awards eventually amounted to nothing.

We’d of course welcome a follow-up to Creative Assembly’s excellent Alien: Isolation, but rumors about Alien: Blackout so far seem to suggest it’s going to be quite a different game – but everything at this point, beyond the title, is sheer speculation.

When we know more, so will you.