The challenge of making a videogame in the Alien universe is capturing what initially made it so, well, alien. When the first film came out in 1979 it changed sci-fi. Before then, popular space fiction was awash with the brightly-lit optimism of a world that had not long celebrated the moon landing. Sci-fi of the ‘50s and ‘60s borrowed the clean simplicity of mid-century modernism: flying saucers, silver space suits, empty white hallways, and control panels with flashing buttons that had no function. In space, everything had its place, it was envisioned to be perfect.

Alien’s famous chestburster scene threw blood and terror over all of that. Under the low-hanging ceiling lights of the USCSS Nostromo’s all-white dining room, the impregnated Kane twitched in fits on the table as his rib cage cracked open, a new horror born from man – the xenomorph. But it wasn’t just the sex-horror designs that Swiss artist H.R. Giger gave to the titular creature that set Alien apart from its sci-fi peers.

The film envisioned a future in which space travel is industrial, routine, no longer remarkable. The aesthetic that guided the production team when designing the film’s starfreighter was referred to as ‘truckers in space’ due to the exposed pipework, dark crawlspaces, and engineer grease smeared over it all.

It was this that Creative Assembly latched onto when beginning work on Alien: Isolation. The game was pitched to 20th Century Fox as an authentic entry into the franchise. To deliver on that, and succeed where so many others had failed, the team had to go back to the original vision.

No one can hear you read: The best space games on PC

At its core, the game set the player up as the underdog, being pitted against an almost unstoppable adversary,” Alien: Isolation’s art director Jude Bond tells me, “we wanted to capture the terror and dread that Ripley felt in the original movie.” This meant pouring over Ridley Scott’s 1979 classic over and over again. It was from this ethos that the game’s Sevastopol Station was born. 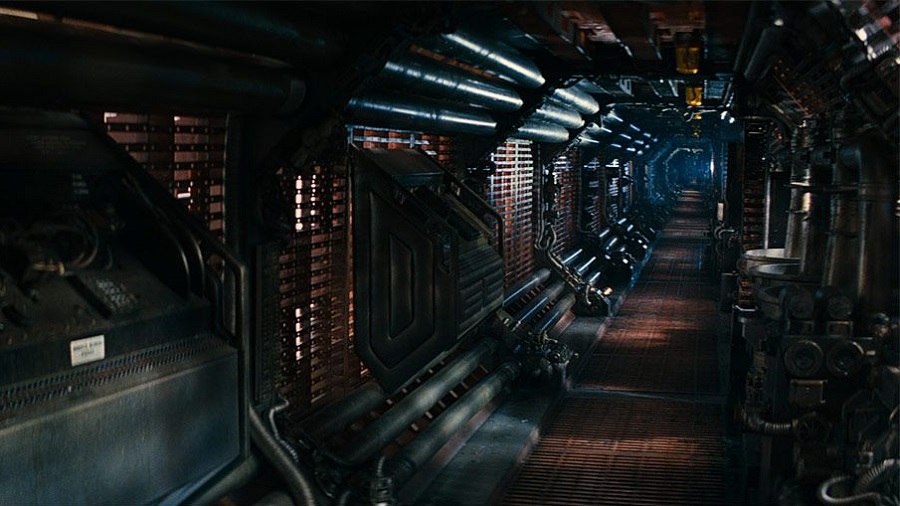 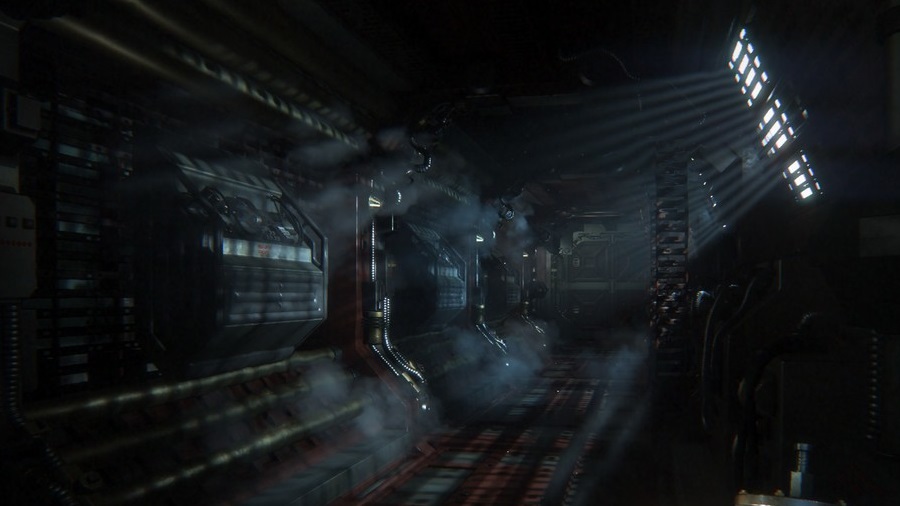 Any horror game is only as good as its setting. Creative Assembly knew this, which prompted Bond to very carefully consider how an intergalactic trade vessel, such as the Sevastopol Station, could fit between the timeline of the first and second Alien films – all while being a thrill to explore.
“The first steps of the environment art planning involved a thorough deconstruction of the original movie and an archive of images from the 1979 set,” Bond explains. “Once we understood what we had and classified it into meaningful chunks, we took a step back and looked for the holes: the functional requirements of the space, what the AI required, which spaces the narrative required, how these locations were linked.”

We created shape, form, and shadows which could be mistaken for the creature

As if this multistage process wasn’t enough, while walking the tightrope between being faithful and practical, the art department had the game’s namesake to contend with. Alien: Isolation’s central feature is the iconic xenomorph itself, which for once isn’t a horde enemy solved with few sprays of an assault rifle as in most Alien games, but a single deadly stalker. It’s programmed using an unpredictable AI algorithm that sees it aggressively hunt you down across the entire stretch of the space station, unrelenting in its pursuit should it spot you.

“Mechanically, the levels were built to facilitate the alien’s behaviour and desired interactions – cover placement and architecture created looping routes to hide, back away, and successfully evade or avoid the creature,” Bond says. The visual design of the levels had a different goal: “immersing the player, imparting emotion, and telling a story.” 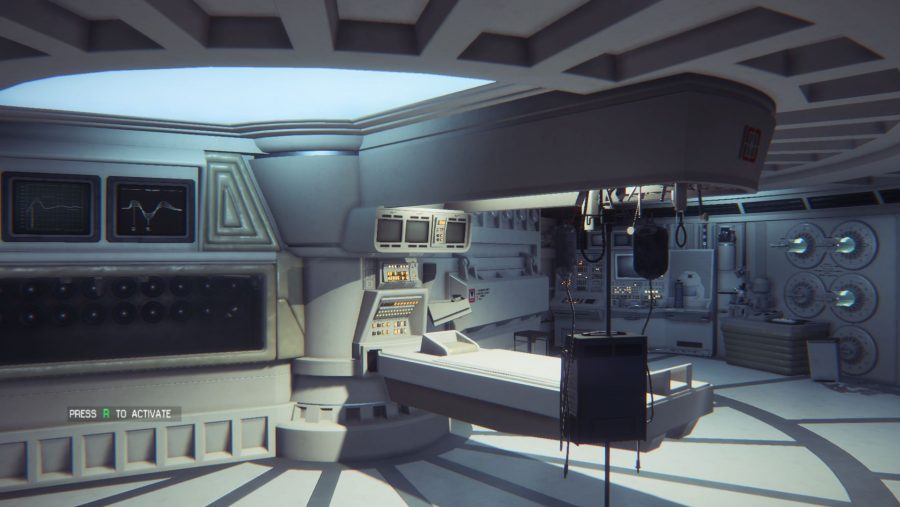 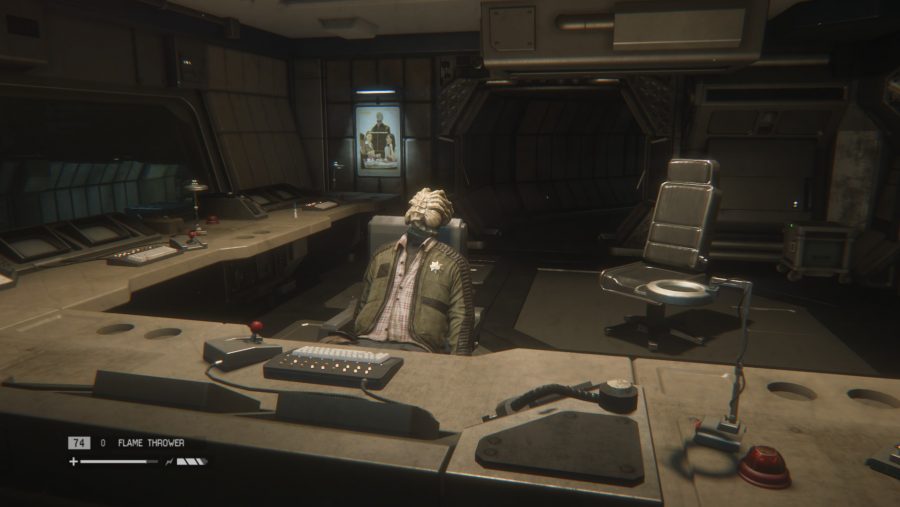 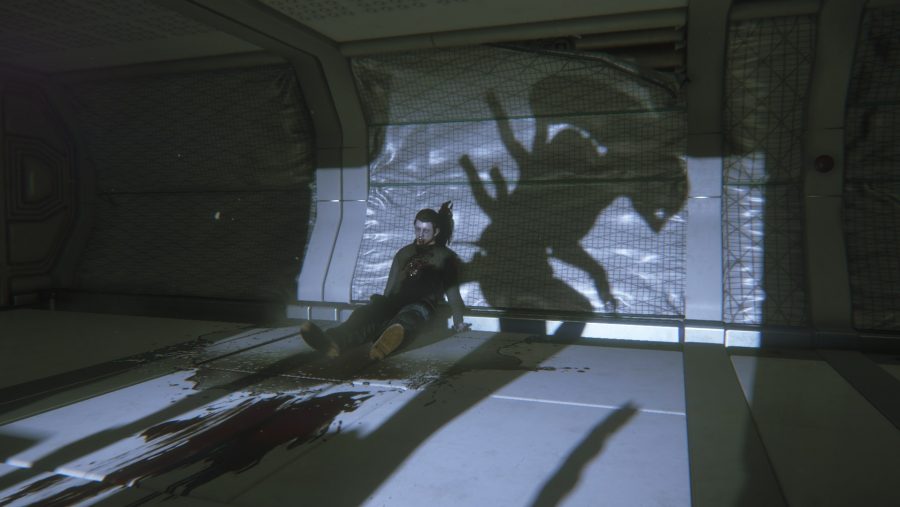 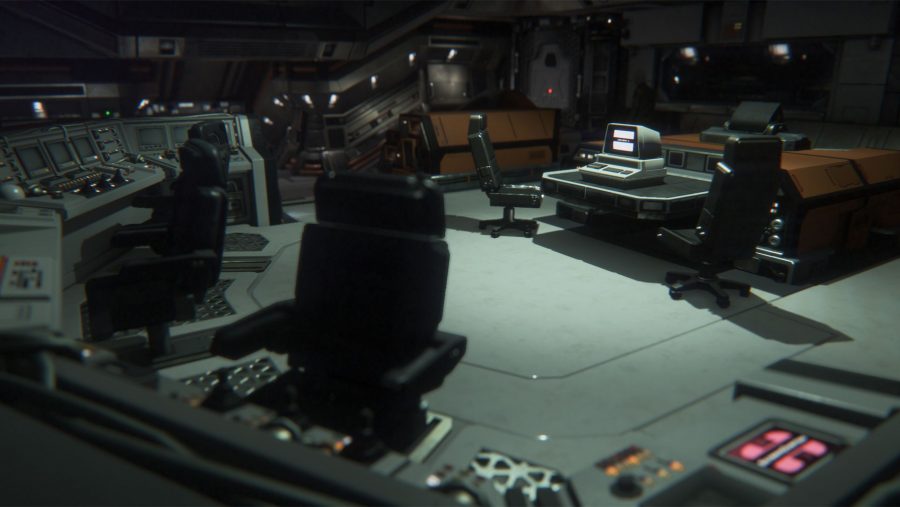 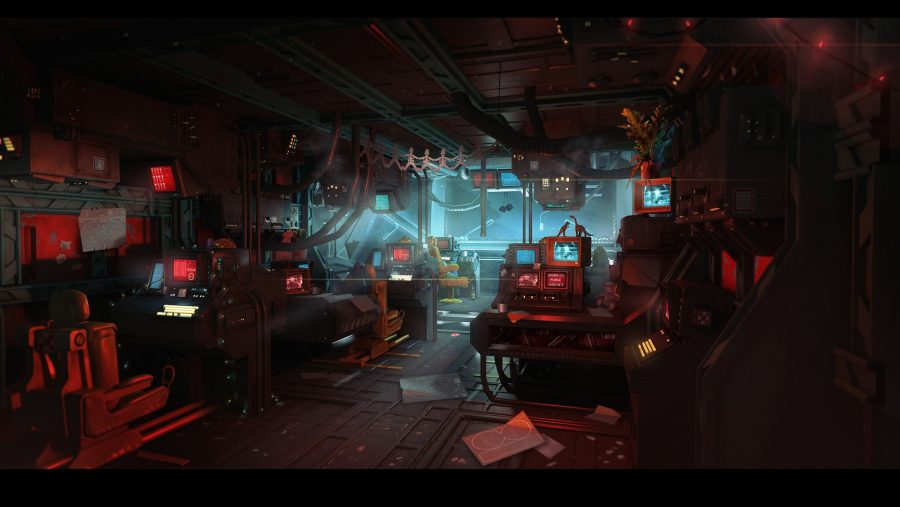 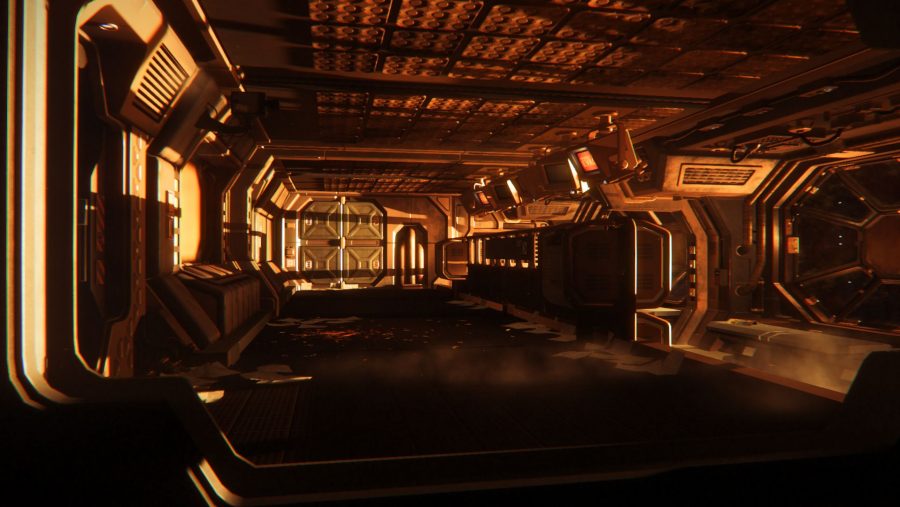 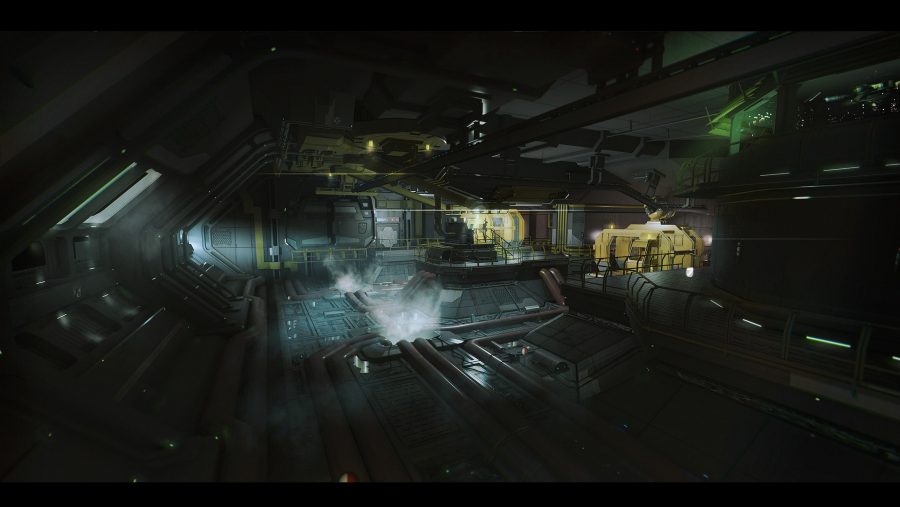 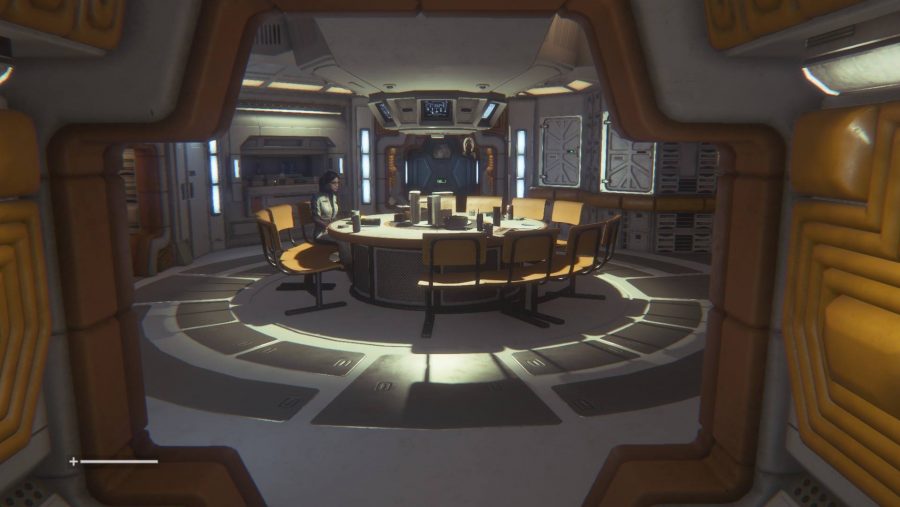 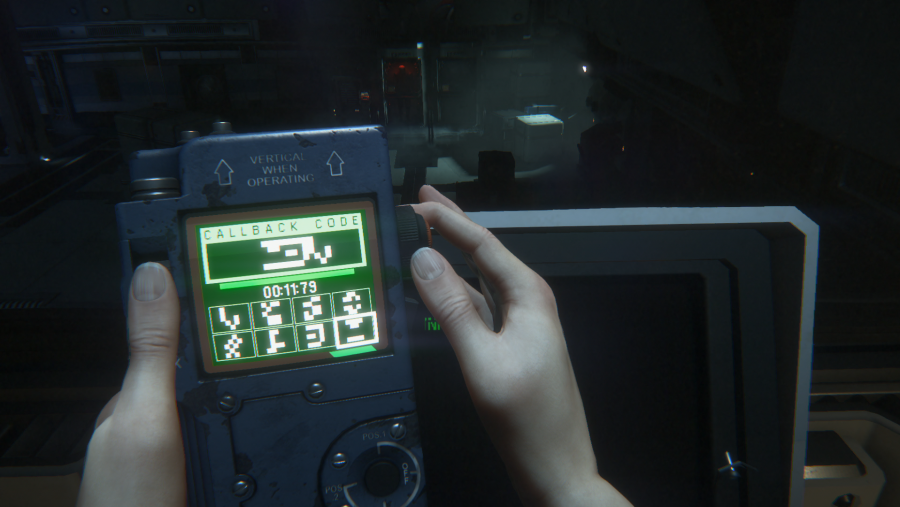 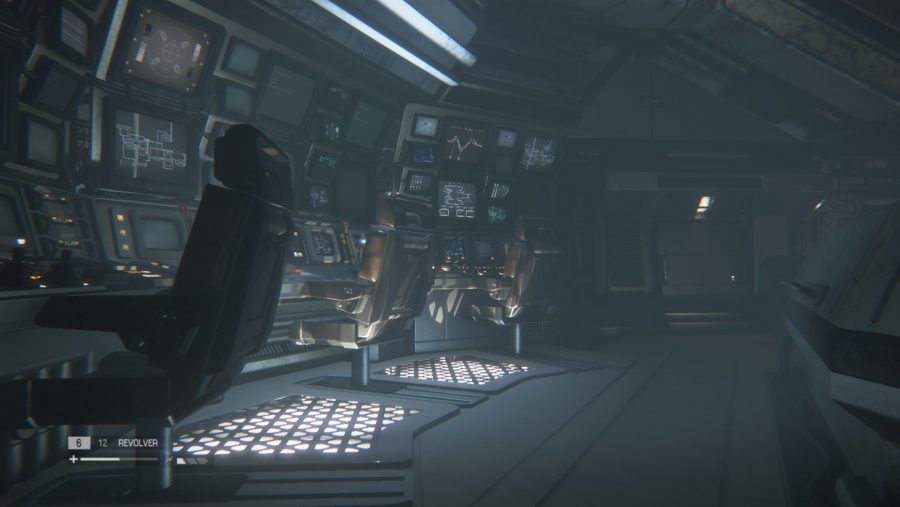 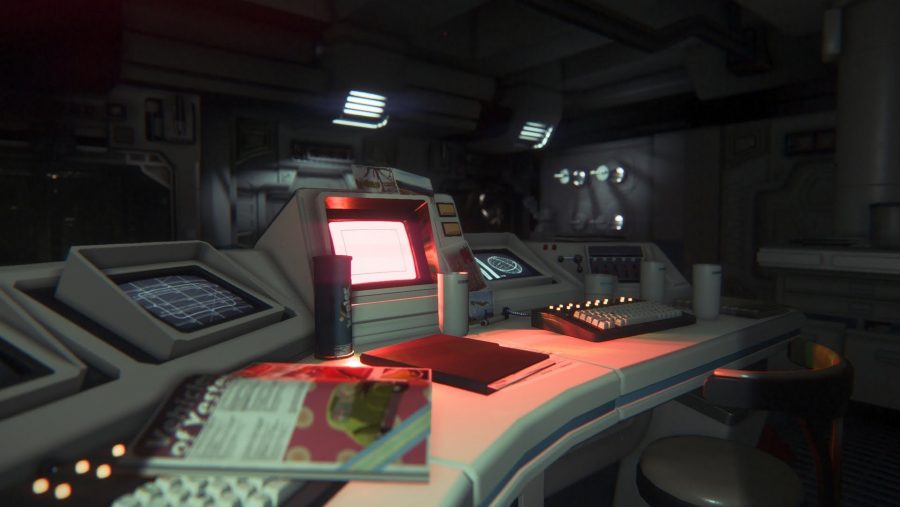 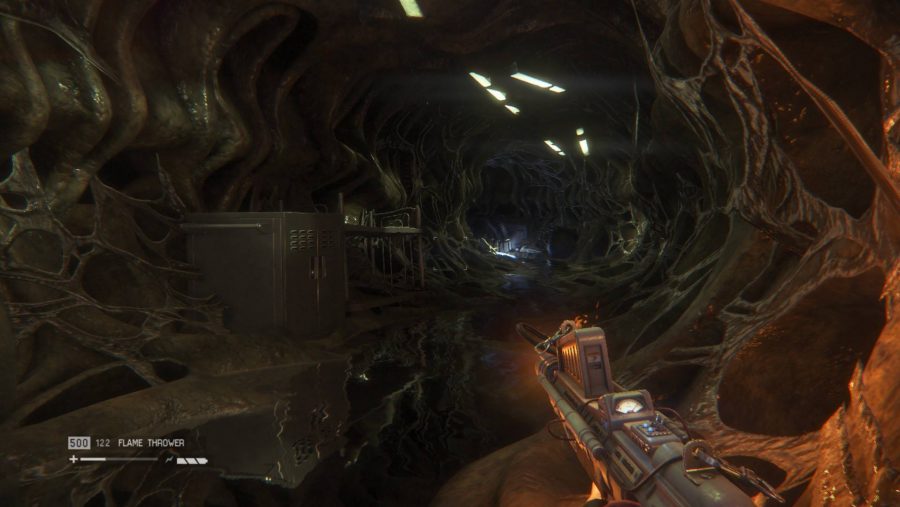 The secret behind the achievements of Creative Assembly’s art team was a question: they continuously asked whether what they were working on could have been made in 1979 – if it couldn’t, they binned it. That’s why there are direct parallels that can be made between scenes in Alien: Isolation and its cinematic inspiration.

Sevastopol Station is nearly 18 km wide and can house up to 3000 people. It's split into three main towers: a communications hub, a production facility, and living quarters. The towers are connected by an engineering platform at their base that has a Towerlink tram system running through it for quick transportation.

The opening of the 1979 movie enters the cockpit of the Nostromo where a CRT display lights up on its own accord, projecting electronic data into the dark interior, where it dances on the visor of a nearby space helmet. The camera then follows the flicker of life across the retro-future tech built into the rest of the spaceship – the sockets and cables, the switchboards and ribbed corridors. Likewise, the walls of Alien: Isolation’s starfreighter are lined with those same chunky keyboards and square monitors, but now you can get up close and properly interact with it all.

This isn’t always a delight – sometimes, the aged technology actively works against your best intentions. The save system is the biggest culprit. To keep your progress, you have to locate one of the emergency terminals, insert your access card, and then wait for three lights to blink off. If the xenomorph is chasing you then it’s possible for it to catch up with you and force its teeth through your skull before those lights go off and your progress is saved. It’s a brilliant example of how Creative Assembly took the sci-fi designs of the original film and translated them into a gameplay function that makes sense for the Alien universe.

The meticulous attention to detail the art team applied inside the Sevastapol Station is what shines throughout the game, not least the noticeably ‘lived-in’ feel that permeates much of the game’s areas. It shares the Nostromo’s knack for tight corridors, ‘70s lo-fi tech, and all the grime. It’s an accurate enough recreation of the first film’s aesthetic identity that you feel like you’re peeking into a corner of the Alien universe that was left previously unexplored.

With the aesthetic and utilitarian layout of Sevastopol Station down, Alien: Isolation’s art team then had to set about making the freighter feel appropriately bleak, secluded, and a nightmare to traverse through. Why let the xenomorph have all the frights? Bond and his team were adamant they could provide a few scares of their own purely through the ship’s design. You’ll experience this yourself when creeping through the hallways of the Sevastapol Station but Bond points to one particular section of the game that let the artists really ramp up the terror: the alien nest.

“The nest was made from the same stuff as the creature itself, allowing us to create a degree of ambiguity in the frame – is that the architecture or the creature?” Bond says. “We’d made a conscious effort to do this elsewhere in the game, creating shape, form, and shadows which could be mistaken for the predatory creature, but the surface and structure of the nest location was so close to the alien that this trick became almost child’s play here.” 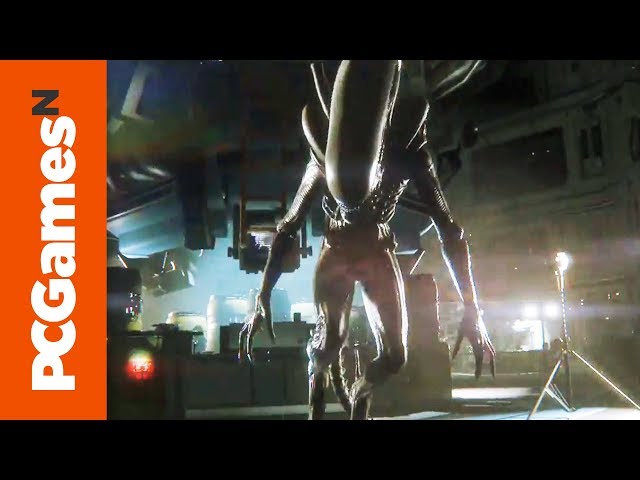 The Facehuggers worked well in the shallow waters of the alien nest, too, creeping and slithering towards you until they’re close enough to jump out at you. It all plays with the theory that what you can’t see is often scarier than what you can. “The nest was the perfect playground for the creature and the perfect environment for us to mess with the player’s emotions, it was great fun to make and terrifying to play,” Bond tells me.

Today, Sevastopol Station sits comfortably as one of the most memorable locations to feature in a survival horror game. Not only does it smartly avoid the traps that plagued Alien games for the past three decades, it also faithfully adapts the aesthetic from the original film to create a setting that serves atmosphere and tension first and foremost.