From the developers of the Pixel Puzzles series comes All Guns On Deck, a sidescrolling, retro styled naval strategy game with gorgeous pyrotechnics. Blending gameplay styles, you can switch between shmup controls or micromanagement, controlling the crew and systems of your ship in the fight against your aerial enemies.

As well as switching between the two gameplay styles, All Guns On Deck boasts light RPG elements, allowing you to upgrade your watery war machine as you progress. The developer, Decaying Logic, believes that community feedback is needed to tune the game’s combat system and see what features would make the game better.

Part of this feedback will be asking the community what kind of ship variants and weapons they want to see in the game, so expect players to ask for loads of different things that probably aren’t feasable and are in direct contradiction of each other. 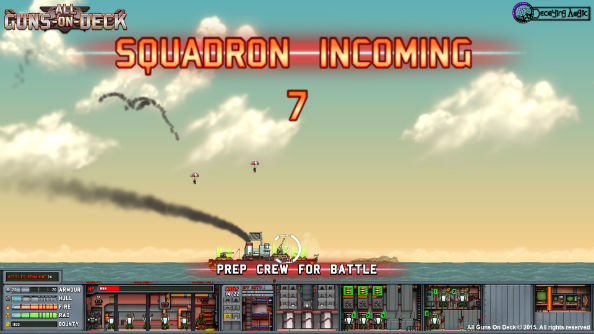 It looks like it could be a winner with its chunky visuals and varied gameplay styles. The strategy element will have you managing everything from when crew members take a break to when they man the guns, whilst also managing the ship’s radiation exposure, fire suppression and target acquisition. You can check it out on August 28, when it enters Early Access.