Alphacool have managed quite a feat with the excellent Eisbaer 240 liquid cooler. It’s not an all-singing and all-dancing light bonanza – it’s simply a seriously competent cooler, with a longer potential lifespan than most, offering consistent top-tier performance on a budget.

Starting to feel the heat? Here are the best liquid coolers around.

The Alphacool Eisbaer is available with a radiator of almost every size and configuration you could possibly want in an all-in-one loop. It’s available in 120mm, 240mm, 280mm, 360mm, and 420mm form factors – you can even pick up the pump on its own and source your own tubing and radiator for maximum compatibility. For today, however, it’s all about the popular 240mm form factor.

The Eisbaer comes with two PWM 120mm Eiswind fans, which can run from anywhere between 550 to 1700 RPM. The radiator is an all-copper design and built upon the NexXxoS standalone series also by Alphacool – it’s not the sleekest radiator in the market but looks aren’t everything.

Even so, the Eisbaer isn’t a terribly ugly unit. Sure, it’s not got flashing rainbow lights and sleeved tubing, but it’s got an… industrial style. The pretty sizeable DC-LT ceramic pump features a window that lights up with a faint blue glow, as does the logo on top, and that’s about as flash as you’ll get with the Eisbaer. 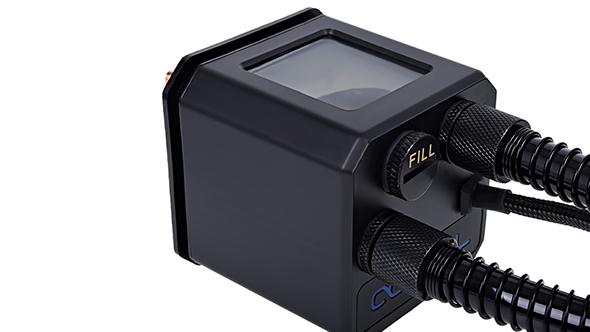 As for the pump, it runs by default at 2600 RPM (but features some wiggle room on voltage), and while relatively quiet by design, the monolithic pump design does feature a slightly awkward locking mechanism to fit it to the motherboard itself. It’s not that it doesn’t get the job done in a way that keeps an even pressure across your CPU’s heat spreader – and it’s compatible with AM4, LGA 1151, and 2011-3 – it’s just terribly awkward to install without unfettered access and visibility inside your rig. Or a helping hand. We definitely recommend installing outside of your case before fitting your motherboard with this one.

Thanks to the swappable design of the Eisbaer and ¼ inch threaded connectors, the AiO components aren’t deemed entirely worthless if a single piece of the puzzle goes awry or you upgrade to a custom liquid loop down the line. One of the tubes from the pump to the radiator features Alphacool’s quick-lock closure, and this fitting allows for pre-filled cooling parts from Alphacool to be added into the loop as necessary, including their own Eiswolf GPX-Pro graphics card cooler. 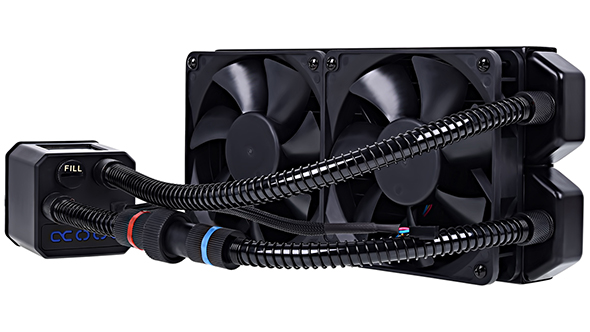 In ditching the software for this not-so-closed-loop cooler, the Eisbaer 240 will run straight from your BIOS. Subsequently, fan curves are easily changed (manufacturer BIOS interface dependent), and no middleman software interrupts your gaming with frequent pop ups or frustrating inconsistent behaviour. That gets two thumbs up from me.

In this case, the custom fan curves we put in place within the BIOS allowed for slower RPMs, and subsequently lower volume, than similar 240mm coolers we’ve tested previously. While still no match for the silence of the maglev fans packed with the Corsair H115i Pro, the Eisbaer 240 manages fantastic temperature benchmark scores versus even the most popular and pricey liquid coolers of today. This is especially prevalent at stock clockspeeds, but even a hefty 5GHz overclock on our Intel i7 8700K wasn’t enough to knock the Eisbaer 240 from among the top coolers we’ve had on our test bench.

Gone is the meddling software and excessive cabling, and you can forget the needless gimmicks, the Alphacool ticks all the boxes for simple out-of-the-box performance and that alone. It’s serviceability only adds to the value on offer, around $126 / £103 currently, but you can easily find it for less if you shop around – the price is often known to fluctuate in the customer’s favour, too.

The Alphacool Eisbaer 240 is everything a quality liquid cooler should aim to be: cool, quiet, and unobtrusive.