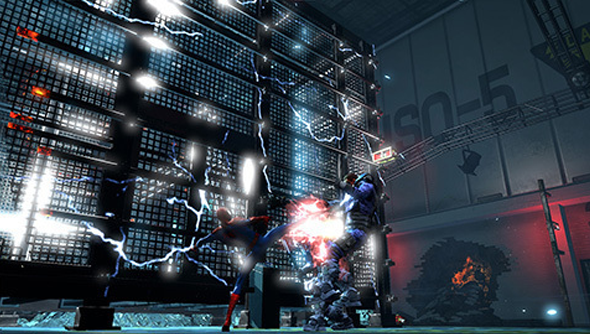 Spider-man’s one of the few superheroes that has made a successful transition into gaming. There’s a simple joy to the way Peter Parker flings himself about Manhattan, begging you to throw him off tall buildings and leave shooting out his fall-breaking web till the last moment. No other game provides quite that same freedom.

With the next Spider-man film on the horizon we’re being treated to another game in those fancy red and blue socks.

The trailer suggests that the hunter Kraven will be acting as a mentor to you, teaching you how to hunt the urban jungle. With the main villain of the next film lined up as Electro it’s not clear whether Kraven will show his true colours. In the comics Kraven hunted Spider-man to prove he was the greatest hunter in the world. He didn’t use guns or weapons that spoiled the hunt, instead opting for traps and hand-to-hand fights.

That said, The Amazing Spider-man 2 looks to be chock full of baddies, even if Electro is taking the top spot. If the game is to follow the film, at least in part, then we’ll be meeting Harry Osborn/Green Goblin and a whole host of Oscorp creations:

So long as developer Beenox keeps to the open world freedom of the other Spider-man games we should be in for a treat.