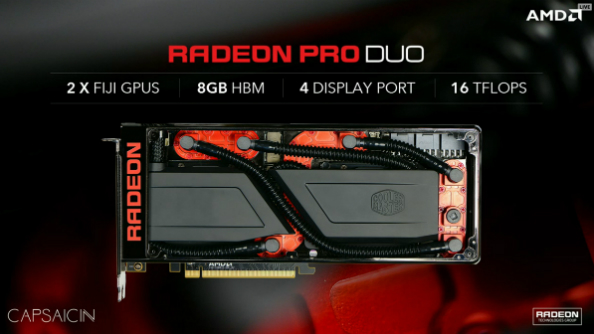 Crikey, that’s a spicy meatball. In contrast to AMD’s erstwhile strategy of creating offerings just below NVIDIA’s GTX 970 price point using Fiji architecture, the Radeon Pro Duo throws austerity and practicality out of the the window. Expected to retail for $1500 in early Q2 2016, the new single card setup is expected to yield similar performance to a Fury X CrossFire setup.

Just bought a graphics upgrade of your own? Head over to the best FPS games on PC to see what you’ve been missing.

Over at Anandtechthey’ve pegged the specs as being almost exactly equivalent to two R9 Fury Xs. That means 2 x 4096 stream processors, 2 x 256 texture units, and a total of 8GB HBM 1.0 VRAM. Like AMD’s other top-end Fiji cards, particularly their dual GPU offerings, it’s built with a closed loop liquid cooler rather than relying on fans alone.

It’s also worth noting the TDP of the Pro Duo – AMD have it at 350W, but it requires not to but three 8-pin power connectors to function. That mean it could theoretically suck up to 450W (plus a further 75W from its PCIe slot) if you really started to lay the hammer down with overclocking settings.

It’s an absolutely formidable card then, but one intended primarily for VR content creation over gaming. As anyone who’s used a dual-GPU card – or an SLI/CrossFire setup – will attest, it’s not always the optimimum hardware arrangement for outright gaming performance, however many TFLOPs your $1500 silicon can chuck at the screen. Drivers will always be a limiting factor, and if you’re talking about limiting factors in the same sentence as ‘$1500’ something’s not right. With AMD’s Polaris GPUs expected to arrive later this year, gamers will be best advised keeping an eye on next-gen announcements rather than taking the plunge here.

But in a VR creation scenario, the Pro Duo’s specs make a lot more sense. If 90 fps is required for optimum VR performance, developers need to create their software on the most powerful hardware possible in order to find the performance optimisations. It’s unusual to see such a high-priced card pegged for such a specialist usage right out of the gates, but AMD clearly have a plan for gamers 2016 that involves Polaris.

Final thoughts: the card itself is small enough to install in a four-way array on your motherboard. So, y’know, if you did have $6,000, a PSU capable of dealing with what may amount to 2000W TDP, and somewhere to put all those liquid cooler fans, you’d probably get a pretty decent PC out of it. Just a thought.