AMD have outlined their CPU and GPU process node roadmap for upcoming architectures, and if all goes to plan over at GlobalFoundries, partially EUV processed chips may be in your rig by 2020.

Get some 12nm tech in your rig with the best AMD CPUs for gaming.

AMD started the week with the launch of their Ryzen Pro processors and APUs for businesses, and all that interesting corporate stuff, but it was also accompanied with some tasty morsels of information regarding their powerhouse Threadripper 2 chips. These are sampling already, but are only expected on the shelves sometime in Q3. We’ll likely hear more from team red on the matter at Computex in June.

But what’s also very interesting is the confirmation from AMD regarding their future product roadmaps in terms of both CPU and GPU advancement. First up, following Zen+, which features at the core of AMD’s Ryzen 2 chips, we’ve got Zen 2 and Zen 3 in the CPU space.

Zen 2 is expected sometime in 2019, and “improves on ‘Zen’ in multiple dimensions’, according to AMD’s slides and the design has already been completed – thanks to AMD’s leapfrogging design teams. These new chips are built upon the 7nm process, which GlobalFoundries are currently getting up to speed for steady production pace this year. 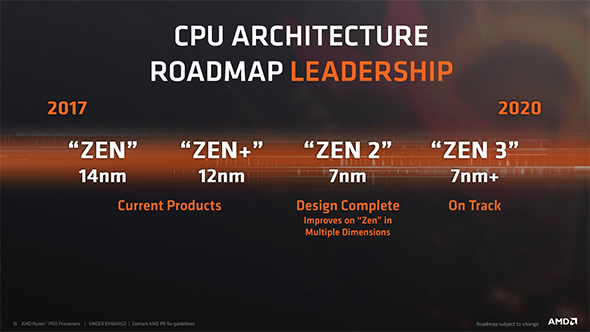 Zen 3 is “on track”, but as for exactly when it’s on track for isn’t entirely clear. The slide indicates somewhere around 2020, although it wouldn’t be surprising for a ‘+’ refinement architecture to appear somewhere in between Zen 2 and Zen 3. Just in case AMD need a little breathing room.

Zen 3 is set to be manufactured on the 7nm+ architecture, likely GloFo’s, which will utilise EUV to reduce some multi-patterning and complexity with the 7nm process. EUV is touted for mass production in 2019, and will be a big deal for the future of computer chip manufacturing.

As for GPU architectures, AMD’s Navi architecture is also confirmed as “on track,” somewhere around 2019. This will be built on the 7nm process node, although could potentially be utilising TSMC’s 7nm process – the same foundry that rivals Nvidia utilise – as Lisa Su confirmed earlier in the year. 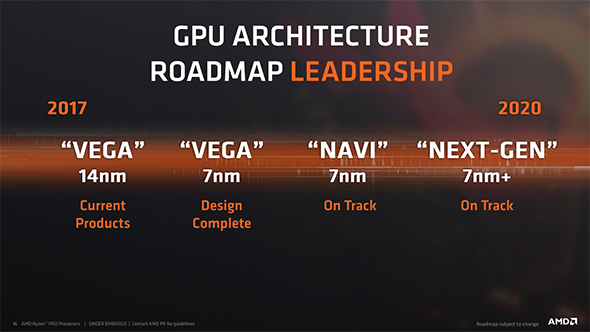 Post-Navi we’re into the mysterious “next-gen” GPU architecture, which could see a departure from the GCN architecture that has been a constant in AMD’s GPU architectures for a very long time. This isn’t confirmed as of yet, however, but AMD seem poised to depart from some of the ageing tech they’ve been utilising for multiple generations of their graphics cards.

The next-gen architecture is similarly marked “on track”. Again, this implies a launch sometime in 2020, although a brand new architecture launch hot of the heels of Navi seems pretty unlikely.

This post-Navi architecture is to use the 7nm+ architecture. Currently, it is not yet known whether this is going to be GlobalFoundries own 7nm node, or TSMC’s second generation 7nm node, although both will likely feature EUV implementation in some way.

AMD’s next few years are looking packed with new tech for gamers to be excited about, with Threadripper 2 as the next big launch. It’s not surprising that AMD are looking to keep their CPU-driven momentum across their short-term roadmaps, however, these roadmaps do look very compact, especially in the GPU space, and that may mean that some intermediary product launches space out the otherwise jam-packed roadmap as 2020 approaches.