Broadcom ethernet controllers aren’t normally the sort of thing anyone outside of the data centre gets particularly excited about – and even they’re just faking it – but the latest one has brought AMD out of the woodwork to confirm that it will be an “early adopter of PCIe 4.0.”

It was rumoured that AMD would be building its new 7nm graphics cards with support for the extra bandwidth the next-gen PCIe 4.0 interface offers, but the vice president of AMD’s data centre group has all but made it official. Previously we’d seen some leaked slides which showed the upcoming Vega 20 GPU running on both the PCIe 4.0 and xGMI interconnects, but this is the first time we’ve heard any official rumblings from AMD on the subject.

“AMD intends to be an early adopter of PCIe 4.0 to meet the ever-increasing need for efficient, high-performance computing resources,” says AMD vice president of data centre design engineering, Raghu Nambiar. He does then go on to say nice things about the Broadcom PCIe 4.0 device, but also references support for AMD’s future CPUs too.

“Broadcom is a valuable contributor to the technology ecosystem,” he continues, “and AMD looks forward to the support for our CPU and GPU processor architectures from the Thor PCIe 4.0 product.”

The xGMI interconnect going into the Vega 20 chip is essentially AMD’s high-bandwidth alternative to the NVLink connection now being baked into Nvidia’s new RTX 20-series cards. But while we’re expecting around 100GB/s of bandwidth in both of those connections they’re likely to remain tied to multi-GPU usage and mostly in professional setups. 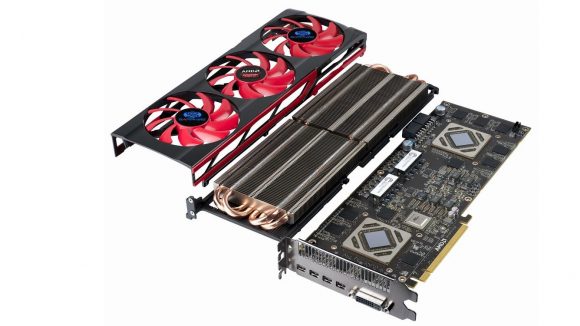 So, while PCIe 4.0 has far less potential bandwidth than either xGMI or NVLink – at around 8GB/s – it’s more likely to be of use in the consumer space. And if AMD has already got it built into the Vega 20 GPU, which is the 7nm Instinct chip coming out in deep learning cards this year, then it’s a strong bet the AMD Navi architecture is going to come out swinging for the fences with PCIe 4.0 support in 2019.

And with the 7nm Zen 2 processors set to launch in 2019 too, potentially around March/April time if AMD follows the last two years of CPU releases, we could see PCIe 4.0 support built into that platform too. Which would make a lot of sense, not necessarily from a performance point of view as our gaming GPUs rarely saturate the bandwidth of PCIe 3.0 at the moment, but more from a platform point of view.

PCIe 4.0 allows for more devices – think NVMe SSDs – to share the same bus without draining the bandwidth pool as much. It also means the X570 motherboards released alongside the Zen 2 CPUs will be sufficiently different from the X470 boards of second-gen Ryzen fame.

And the motherboard makers will absolutely love that because they get to sell even more AM4 boards.