Two new AMD RX 590 graphics cards have been spotted lurking within UL’s 3DMark benchmark database. The two AIB cards, one from PowerColor and the other from XFX, are both brandishing hefty overclocks on top of AMD’s 12nm gains. A promising sign of things to come from AMD’s upcoming silicon refresh.

There are four AMD RX 590 entries in total, two for each AIB card, but let’s start with what looks to be the out-of-the-box factory overclocks. The PowerColor RX 590 is running at 1,576MHz and the XFX card at 1,580MHz. These are both marginal improvements on the 1,545MHz RX 590 that reared its head in a Time Spy run back in October, which shows the RX 590 pulling 9% ahead of the RX 580.

But whoever has access to these cards wanted to see just how far they could push AMD’s latest Polaris silicon. The two remaining clock speeds look to be representative of the cards getting overclocked past their intial GPU frequencies, with the PowerColor managing 1,645MHz and the XFX 1,680MHz. One of these GPUs, although we don’t know which one, manages to knock out an impressive Fire Strike Extreme score of 7,350.

That’s roughly 20% faster than what we’ve seen running an XFX RX 580 at 1,366MHz in our equivalent test bench, and 15% faster than a slightly more capable, factory overclocked Asus Strix RX 580 running at 1,411MHz. 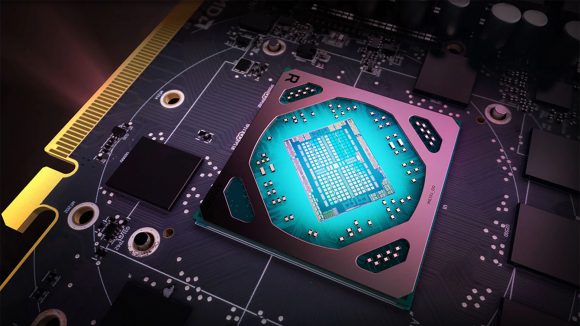 The results were posted by Tum_Apisak on Twitter, although the exact links seem to have drifted into the abyss of 3DMark’s search functionality. As such, we don’t have the exact rig specs for the Fire Strike run. Our test bench is roughly analogous to the Time Spy machine from the initial RX 590 sighting: a Ryzen 2700 CPU, Asus X470 motherboard, and 16GB of 3200MHz DDR4 memory.

The Polaris architecture is not known for its overclocking chops, however. With AMD pushing the current 14nm silicon to its limits back at the factory, there’s little headroom left for gamers to push their GPUs any further. At least not without upping the voltage uncomfortably high and straining your cooling solution.

But the 12nm Polaris architecture – or, more specifically, the Polaris 30 GPU – looks a little more amenable to frequency tweaks. The XFX RX 590 was at least stable enough to finish a Fire Strike Extreme run with a 6% clock speed increase. Not bad for a GPU architecture getting close to its third birthday.

The RX 590 is expected to launch on November 15, according to rumours from a couple of Chinese forums, with a specs sheet almost identical to the RX 580. Both will reportedly come packed with 2,304 GCN cores, a 256-bit memory bus, and 8GB of GDDR5 memory. However, the RX 590 will be built upon GlobalFoundries’ 12nm process, the same one team red opted for with its second-generation Ryzen chips.

AMD is timing the release of the RX 590 to capitalise on the mid-range GPU void in the Nvidia Turing lineup right now. There’s been no word of a GTX 1060 replacement from the green camp, and AMD is moving in for the kill with the RX 590. With a competitive price tag, it could be a smart move for team Radeon.