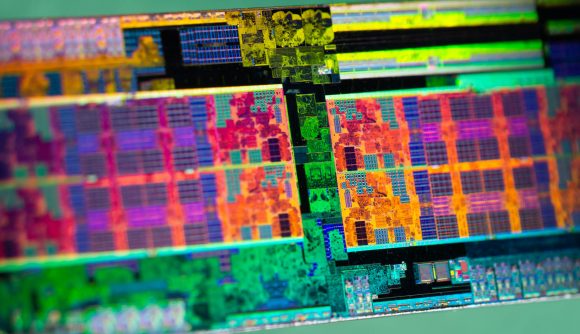 A major reddit leak has dropped performance numbers for the AMD Ryzen 7 4700U, one of the first AMD Renoir Zen 2 APUs set to launch at CES next month. This eight-core APU delivers higher PCMark 10 scores than either the previous Ryzen 5 3500U or Ryzen 7 3700U APUs, and just about tops the 15W version of Intel’s top Ice Lake CPU, the Core i7 1065G7.

That might indicate that it could still be a little shy of the 25W version of Intel’s latest CPU being used in the non-GTX Razer Blade Stealth 13. But will likely massively undercut the Intel silicon in terms of pricing to either the manufacturer or end-user. It does, however, also show that Intel’s latest 14nm Comet Lake mobile chip, the Core i7 10710U, retains the performance lead… in PCMark 10 at least.

There is still no specific mention of the actual GPU being used on the Ryzen 4000-series APUs, so we’re still in the dark whether it’s just a modified version of the existing Vega graphics architecture or uses the newer Navi design. It’s being designated as gfx902, which would still indicate the former, matching previous leaks, and the performance results seem to confirm Vega as well.

The results have popped up on reddit (via Videocardz), where a user has dumped a load of PCMark benchmark data after previously listing off what looks like all the different GPU setups for both the desktop and mobile versions of AMD’s next-gen Ryzen 4000-series APUs.

The APU in question here is the eight-core Ryzen 7 4700U, with a lower base clock than previous generations, at just 2GHz, but with a turbo clock speed set at 4.2GHz. Though it is worth remembering that these are pre-release tests so the software might not be reporting the exact numbers correctly. It doesn’t look like it’s reporting the GPU clock speeds right, as the poster suggests.

There is no simultaneous multithreading (SMT) enabled on this chip, but there have been rumours AMD would release Renoir APUs with the full 16-thread option. Maybe there will be a new level of APUs in this generation, a Ryzen 9 for example. Or maybe that will be limited to the desktop versions of the Ryzen 4000 APUs.