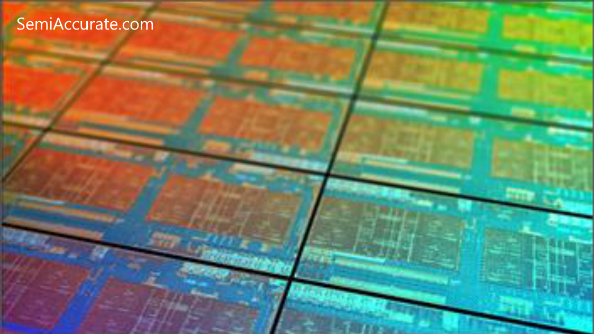 What you’re looking at there is known in some circles as a ‘wafer shot.’ It’s a rendering of the microscopic architure of AMD’s upcoming Zen processor units, intended for release in Q4 this year for high-end desktop PCs. You’re reading a news story about it because AMD haven’t released any info following a broad release schedule announcement, and appear to have accidentally leaked that wafer shot during a meeting with shareholders on May 12th. As for why you’re not wearing pants right now though, I can’t help you with. You really should be. Your boss definitely isn’t happy.

Looking to push your hardware to its limits? Try the best VR games on PC.

The shot was picked up by Semi Accurate, as you can tell by the giant watermark they’ve put on the shot. Having found it, they reached out to people who look at wafer shots and see more than abstract shapes and colours; people who might be able to shed some light on what we have in store for us this Q4 when Summit Ridge chips arrive.

Their unnamed sources see groupings of quad core modulesand cache areas in the architecture. It’s expected that server chips in the Zen family will feature 16 and 32-core models, so those groupings by four seem consistent to the experts.

It’s the narrowest gap under the door from which to peek at AMD’s upcoming Zen processors, but it’s a start. Expectations of Zen are very high, particularly in the high-end desktop space that gamers inhabit. Gamers who have, in their majority, opted for Intel’s high-end desktop offerings for the past few years as Haswell, Broadwell, and Skylake have released.