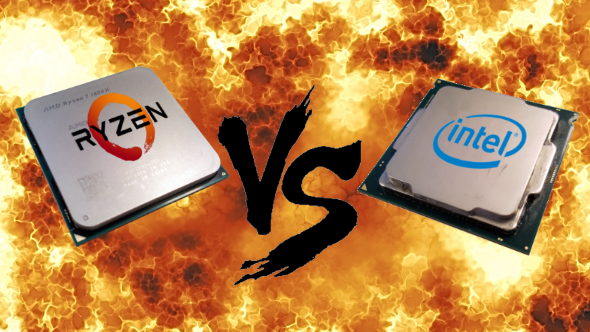 Which side should you pick in the old AMD vs Intel debate? Your choice can make a big difference to how you build your gaming PC. And it’s been a big couple of years for the two processor makers, with more chip releases than an Amsterdam takeaway. Though perhaps with less mayonnaise. So, now the dust has settled on AMD’s Ryzen and Intel’s Coffee Lake who has emerged victorious?

The processor platform as a whole is one thing, but which is the single best CPU for gaming?

This has been one of the most active tech years I can remember, with barely a week going by without some new piece of PC technology being announced, leaked, or launched. The CPU world has seen the most activity with AMD’s processor division finally waking up, launching not just one, but two, new CPU architectures.

Intel has had to respond, upping their core counts while accelerating the launch of every single one of their subsequent processor launches, to the point where we’ve got Intel’s first mainstream six-core CPUs around three months earlier than they should have been launched.

Which has brought its own set of problems. Intel released the high-end desktop range of Skylake-X and Kaby Lake-X parts in August, along with promises they were going to best AMD’s 16-core Threadripper with their own 18-core chip. Then just a few short months later at least three of those newly minted chips have been rendered obsolete.

But in the final reckoning which of the chip giants has won out with their Ryzen and Coffee Lake CPUs? There’s only one way to find out… a heavyweight slugfest. 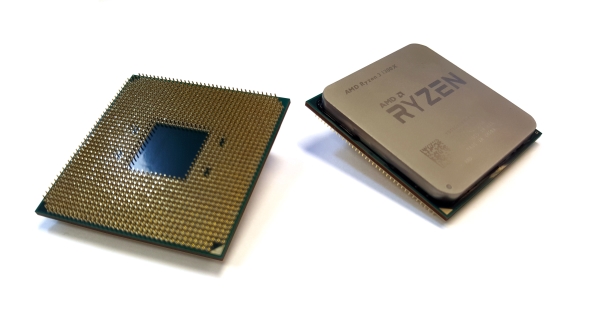 AMD vs. Intel – pricing and availability

When it comes to the basic suggested retail price of the two new mainstream processor ranges it’s looking rather like a draw. I guess that’s to be expected with the two essentially going toe-to-toe on pricing.

The flagship Zen chip, the AMD Ryzen 1800X is something of an outlier, however, despite its relatively recent price drops. At over $400 it’s a good chunk more expensive than the supposedly $360 price of the top Coffee Lake, the Intel Core i7 8700K.

But, because there are so many different Ryzens in the AMD lineup, there’s a similarly eight-core, 16-thread Ryzen 7 1700X that retails for less than the Core i7 and comfortably beats it in any multi-threaded test you throw its way. And, like all Ryzen CPUs, it can be overclocked.

Things are a lot tighter down at the Ryzen 5 vs. Core i5 level, however, with both the AMD Ryzen 5 1600X and Intel Core i5 8600K being priced almost identically, around the $250 mark. But then there’s the sub-$200 Intel Core i5 8400 to content with, that’s a chip that offers the sort of general gaming performance to make AMD’s engineers blush.

There is Meatloaf-scale but coming here though, because you simply can’t reliably get hold of Intel’s Coffee Lake chips yet. The launch was pulled forward to such an extent that stock simply wasn’t available at launch, and is only just starting to trickle back into the channel… sometimes for an unreasonably high price tag. 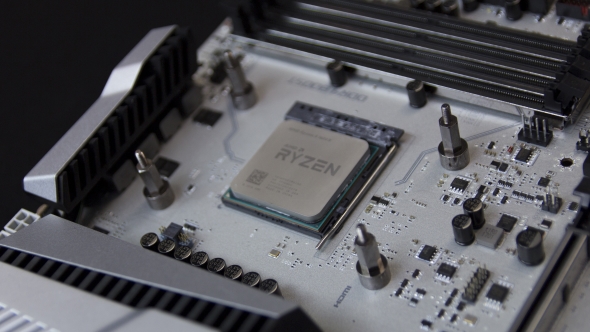 AMD vs. Intel – motherboards and chipsets

The motherboards and chipsets the processors drop into are as essential to the performance and success of a given platform as the CPUs themselves. After all, there’s no point having a great value chip if the only motherboard option you’ve got is the expensive one, right?

With that in mind, for Intel any Coffee Lake customer can use any chipset that they want, so long as it’s a Z370.

Yup, there is only a single, high-end choice for their 8th Gen Core CPUs, with the cheaper, less feature-rich H370 and B360 motherboards not scheduled to appear until early in the new year. Y’know, about when Coffee Lake was meant to launch.

That’s not a huge issue if you’re only looking at the K-series processors, with their hefty overclocking chops, but not if you’ve got your heart set on dropping the excellent Core i5 8400 into your new rig. That’s a straight six-core CPU that doesn’t need the fancy extras which make the Z370 boards the top end of the Coffee Lake stack.

On the AMD Ryzen side, however, there’s no such trouble. There’s a plethora of boards and chipsets to choose from, all available with different features, at different prices, but all with a single, unified socket.

The X370 and B350 motherboards offer impressive overclocking performance for every one of the multiplier-unlocked Ryzen CPUs, while the cheap, ultra-basic A320 boards are designed to purely offer great value and stock processor performance. The solitary AM4 socket they all use has been created to cater for not only this generation of AMD’s Ryzen chips, but also the mooted 12nm refresh expected next year. There’s also the not-so-small matter of the Raven Ridge APUs, whose desktop iterations will fit into the AM4 socket just as well, offering a combination of the Zen processor architecture and the AMD Vega GPU tech too.

Reckon the current LGA 1151 v2 socket is going to be sticking around for the next few generations of Intel CPUs? Not likely. 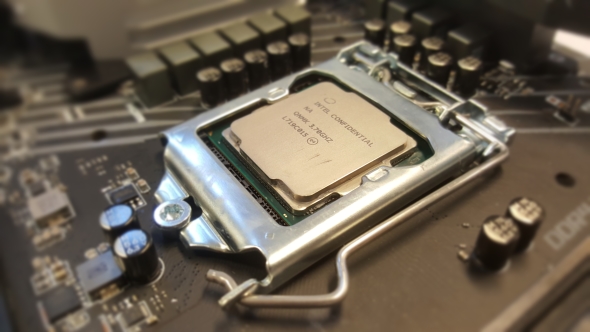 AMD pulled the trigger on their Ryzen CPUs, once more betting that higher core counts were the future. They had tried that before with the failed Bulldozer CPUs, but this time around the world seems to be listening. It didn’t really matter how many threads AMD’s heavy plant-based Bulldozer, Piledrive, Steamroller, or Excavator chips could boast, they were essentially pretty rubbish.

Complain to someone who cares, FX owners…

But, given the powerful new architecture, software that’s starting to appreciate higher thread-counts, and the number of cores on offer with Ryzen, you’d maybe think that in straight CPU terms this would be a whitewash for AMD.

But hold on. The extra two cores of the eight-core Ryzen 7 chips, compared with the six-core Intel Core i7 CPUs, don’t always deliver that much extra performance, and the Coffee Lake silicon has a way around it when they do.

When you look at the Cinebench rendering tests the Ryzen 7 processors smash the Core i7s and the same goes for the Ryzen 5 against the Core i5 chips. But the X264 video encoding tests show them being a lot closer. And then there’s the classic Intel single-threaded performance, which is far in advance of the AMD competition.

In short, this bruising round’s a draw. 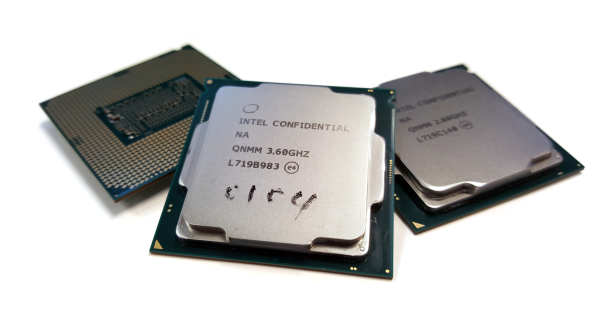 This is where AMD starts to look a little leggy, like it’s started to punch itself out. Coffee Lake, on the other hand is only just getting into its stride, because it is one hell of an overclocking platform.

The argument is that this is why Intel needed a whole new socket and chipset for Coffee Lake. They had to nix backwards compatibility in order to deliver the increased level of power the two extra cores needed so they could be overclocked to the point they could take on the higher core-count Ryzens.

Once you’ve got the either of the Core i7 or Core i5 Coffee Lake chips running above 5GHz there is suddenly very little between them in multi-threaded applications and the single-threaded performance of the Intel silicon goes through the roof.

The flip side of this is that all of Ryzen’s chips can be overclocked while Intel still charge a pretty penny for the premium privilege. Unfortunately those Ryzen chips can’t actually be overclocked very much… 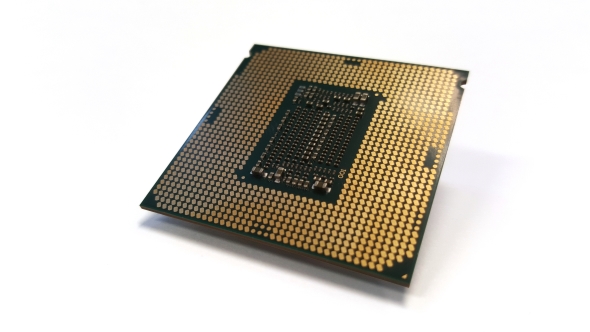 This is the big round, right? This is the part of the fight we all tuned in to see. What are the two different platforms able to offer us gamers in terms of those all-important frame rate figures?

Overall, this is a straight win for Intel. The Coffee Lake architecture’s superior single-core throughput allows it to deliver the highest frame rates across the board, almost no matter which iteration of the Intel technology you’re using.

There are games, such as Doom when running in Vulkan mode, and Rise of the Tomb Raider in DirectX 12 trim, where there is parity, but for the most part it’s all in Coffee Lake’s favour. Especially when you add in the modest frame rate the increased overclocking potential will net you.

Granted, your graphics card is going to be doing most of the grunt work at the highest resolutions, but surely you want a chip that’s going to be able to give your expensive GPU the best opportunity to shine, don’t you?

There’s also the fact the Coffee Lake chips are finally upping Intel’s core-count game – arguably at the behest of AMD – and that means future titles that take advantage of such things will benefit Intel’s silicon as much as Ryzen.

AMD vs. Intel – the verdict 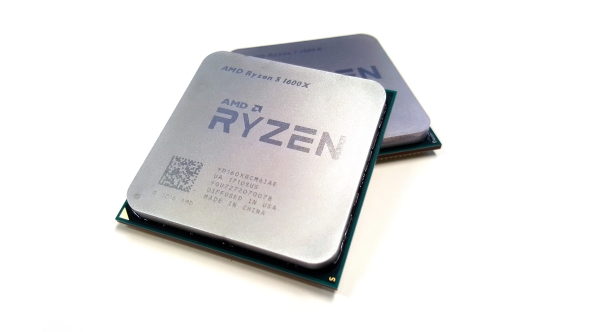 So, what we end up with is a rather unsatisfying draw.

There were no knockout blows on the part of either AMD or Intel, and no-one throwing in a red-stained white towel, or tripping over a spit-filled bucket either. The blood-thirsty might not be sated, but for the rest of it means our favourite gaming platform now has two different processor ranges that offer a huge amount of performance to us PC people, and that can only be a good thing.

If your PC use is more heavily weighted to the productivity side, where thread-count really is king, you’re probably better off picking a Ryzen machine, but if you’re a dyed-in-the-wool gamer then it’s Intel that really has you covered.

But we can’t really leave it like that. No-one likes a draw, so we’re going to have to take this to an independent adjudicator. And, because I run the hardware shizzle around here, that’s me.

So, no matter how much I adore and endorse the Core i5 8400 as a great gaming CPU, you’re forced to buy an expensive Z370 motherboard for your mainstream processor. And that’s got to mean that Ryzen takes the win… for now. 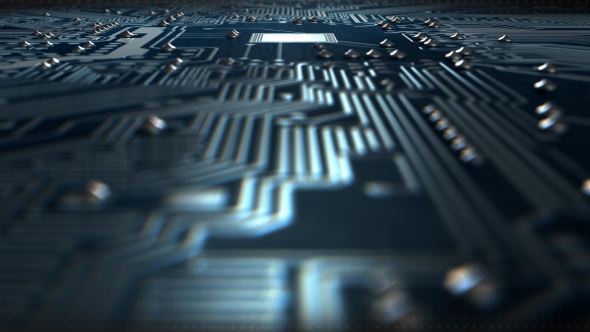 Last year was a brutal one in terms of the big processor bun fight, but 2018 isn’t going to be a garden of roses for the two big chip makers either. AMD are still in the ascendency and have blinked first with the release of their Raven Ridge APUsand are all set to launch their refreshed AMD Ryzen 2 platform in April.

But Intel aren’t resting on their laurels either, and will be releasing a second wave of Coffee Lake chips probably around the same time. Along with the new processors will finally come the mainstream motherboard chipsets that will make the non K-series CPUs a little more relevant.

There’s also the possibility that Intel will release something more aggressive to try and give the second-gen Ryzen chips a little more serious competition. At the moment all that’s leaked out from Intel is that they’re going to refresh the range with a couple of new Core i5 CPUs and a lonely Core i3. It’s possible we’ll finally see the launch of the super high-end Z390 chipset in the middle of this year, and with that maybe a new Core i7… or maybe even a Core i9.