Finland’s IT Center for Science, also known as CSC, is spending big on updating its high performance computing, bringing a new supercomputer online with 200,000 AMD Zen 2 CPU cores. That’s phase two of the process, with the primary phase consisting of an air-cooled BullSequana X400 cluster with a whole bunch of Intel’s Cascade Lake chips that is meant to be capable of a theoretical 2 petaflops of processing power.

That’s due to be brought online in the summer of next year, while phase two of the vast supercomputer array will see CSC set up 3,125 64-core AMD EPYC chips in a liquid-cooled BullSequana XH2000 machine. Phase two is due for completion by the start of summer in 2020, and will add around 6.4 petaflops of processing power to the already pretty beefy setup.

And in order to get all this done Finland is investing $41.8 million in improving it’s super high-end processing capabilities. And giving itself one hell of a gaming rig into the bargain… which will still probably struggle with Deus Ex: Mankind Divided at 4K.

But it’s not just AMD and Intel who are set to benefit from this monster supercomputer project in Finland. Phase one of the setup will also see CSC building up its AI research capabilities by adding a separate strand of the project which brings in 320 Volta-powered Nvidia V100 GPUs, configured in 4-GPU nodes.

This extra silicon will add another 2.5 petaflops to the bill, eventually providing the whole CSC Supercomputer with around 11 petaflops of theoretical performance. And that’s apparently five times the amount Finish researcher currently have available to them. 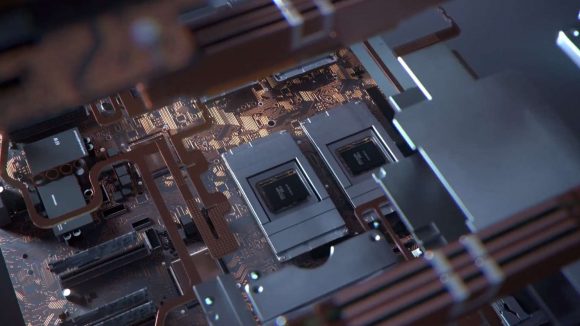 Can’t afford a supercomputer: The best CPUs for gaming

Despite being a monster rig, the new Finish supercomputer isn’t going to be in with a shout of breaking into the top 10 of the TOP500 supercomputer list, however. Right up the top is the Summit supercomputer, sporting 27,648 Nvidia V100 GPUs and capable of over 200 petaflops of processing, and sitting at number 10 is the Sequoia using IBM A2 chips for a peak of more than 20 petaflops.

Plus they’ve all got cool names, better than the BullSequana XH2000… well, apart from the AI Bridging Cloud Infrastructure. Looks like Fujitsu is barely trying there.