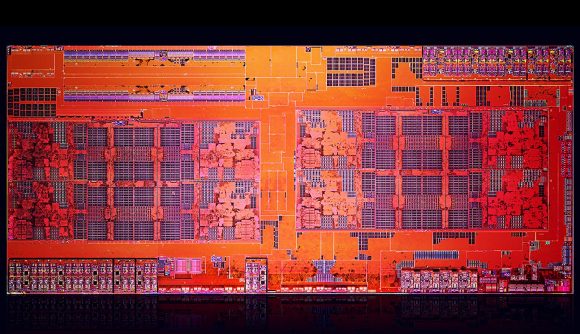 AMD is currently making big waves with its EPYC 64-core chip, built upon the Zen 2 architecture and featuring, for the first time in the x86 world, the 7nm process node. The move from 14nm to 7nm is promising serious performance uplift, but it already looks like AMD’s following CPU architecture, Zen 3, will be a far more conservative step for the red team.

AMD’s CTO, Mark Papermaster, has said in an interview that the 7nm+ process node will be utilised to maximise efficiency within its Zen 3 CPUs, and will offer only “modest device performance opportunities”. While we know relatively little about the Zen 3 architecture, it is the first expected to utilise EUV in some capacity, and AMD is confident that the process is “on track” for launch sometime around 2020.

EUV, or extreme ultraviolet lithography, is a transistor fabrication technology that has been on the cusp of widespread adoption for over a decade. EUV hopes to offset IC production’s current unsustainable trajectory, which already utilises heaps of masks, multi-patterning, and optical tricks to create dense silicon circuits.

Speaking to EETimes during the EPYC reveal event, Mark Papermaster confirmed the performance uplift will be “modest” with 7nm+ over its predecessor. He also touched on the difficulties in making the change to leading-edge technology, and how AMD was no longer seeing the frequency lift it used to enjoy with fresh-faced processes.

“Moore’s Law is slowing down, semiconductor nodes are more expensive,” Papermaster says to EETimes, “and we’re not getting the frequency lift we used to get.”

Just this year Zen was replaced one year on by the Zen+ architecture. The change was moderate, but the step from Zen to Zen+ allowed AMD to take another hit at its Ryzen CPUs, effectively rejuvenating the architecture mid-generation with a more efficient process.

“It’s not an area statement, it’s a power efficiency statement,” James Prior previously told us in regards to the move to 12nm with Ryzen. “The area is not going to change much, but the ability for us to manipulate the frequency voltage curve has improved.”

Whether AMD would follow a similar path with Zen 2 was unclear, but Papermaster’s sentiment hints at an approach with Zen 3 that’s not all that dissimilar to Zen+. Utilise a more efficiency process, increase frequencies to match the last generations’ power envelope, and, voila, you’ve got yourself a moderate performance increase and a worthwhile half-step generation.

That doesn’t mean AMD couldn’t also implement some big changes to the architecture and find performance elsewhere. But with potentially only a year between Zen 2 and Zen 3, that’s an awfully big ask of even AMD’s leap-frogging design teams. Never say never….

AMD’s current x86 roadmap indicates Zen 3 is ‘on track’ for sometime before the end of 2020. That doesn’t leave Zen 2, expected sometime in Q2 2019, too long in the sunlight before it’s replaced by the next-generation, which could also hint to more of a half- than full-gen redesign.