AMD just confirmed 3rd Gen Ryzen Threadripper CPUs will launch in 2019. While there’s no specific launch window as of yet, within its March 2019 investor presentation the red team confirmed that 3000-series Ryzen Threadripper high-end desktop (HEDT) processors are planned for sometime before the year’s up.

The presentation slide outlines the 2019 AMD client lineup and the company’s “non-stop product momentum”. Starting with 2nd Gen Ryzen Mobile APUs in January – 3000-series Raven Ridge – and shortly followed by low-end mobile SKUs, the presentation brandishes a heap of products in the Ryzen family planned for the rest of the year.

The first being 2nd Gen Ryzen Pro Mobile in spring – enterprise-class 3000-series Raven Ridge processors fit for the commercial, security-focused IT world. These will be followed mid-year by AMD Ryzen 3000 processors, or 3rd Gen Ryzen, excitement for which has grown to near fever pitch already. That’s because AMD is taking the 7nm process node out for a spin for the first time with Zen 2: the architecture behind 3rd Gen Ryzen, EPYC, and Threadripper.

AMD has already boasted the performance and efficiency gains to be had with TSMC’s advanced semiconductor manufacturing process, crushing Intel’s i9 9900K with an engineering sample live on stage over at CES 2019.

CPU supremacy: These are the best CPUs for gaming

Last, but certainly not least in core count, AMD’s 3rd Gen Ryzen Threadripper CPUs are expected towards the end of the year. With the red team expected to cram up to 16-cores onto the AM4 platform thanks to Zen 2’s chiplet approach, imagine what it could do with all the space afforded to it by the TR4 socket with Threadripper. 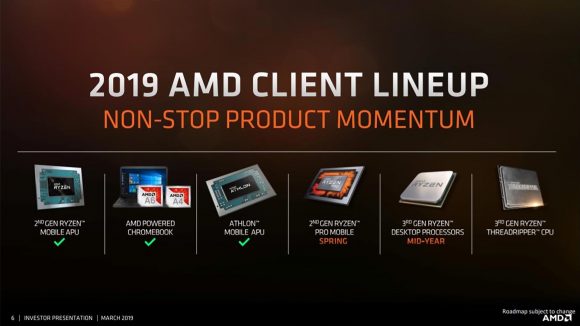 EPYC Rome features up to 64 processing cores with eight 7nm Zen 2 chiplets. That opens the door for core parity on Threadripper, but AMD could refrain from the full processing core loadout in the consumer space.

The last two Threadripper generations launched between August and October. Though with 3000-series Ryzen CPUs expected a little later than their predecessors, there’s a chance AMD could do the same with its latest HEDT processors, too.

2019 is shaping up to be a momentous year for AMD. Not only is 7nm revitalising its desktop CPU product stack, Radeon Technologies Group is also opting for the latest process with its graphics cards. Radeon VII was our first taste of a 7nm die shrink in the graphics department, but AMD Navi is set to rock the mainstream later this year purpose-built for the dense process node.