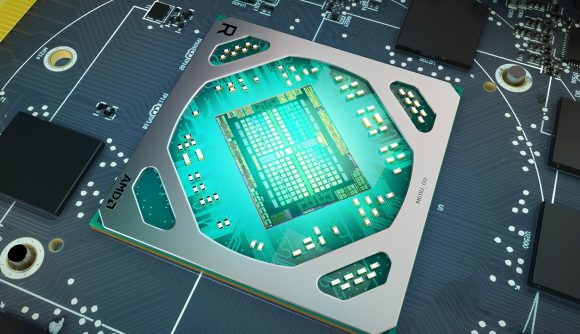 Several codenames for AMD Navi GPUs have surfaced within the Apple MacOS Mojave source code, but they are not what they seem. One hawk-eyed user found the codenames Navi 16, Navi 12, Navi 10, and Navi 9 lying within the source code for Apple’s latest OS update back in November – yet this may all be explained away by simple coding syntax.

The potential codenames were technically in the public domain since last November, shortly after Apple’s Mojave update launched to the world. Since then they have resurfaced as further proof that AMD must be nearing its launch date for its upcoming mainstream Navi architecture. Within the driver package named ‘AMDRadeon6000HWServiceskext’, one user discovered multiple entries pertaining to AMD Navi GPUs. Specifically Navi 16, Navi 12, Navi 10, and Navi 9 variants.

However, this may all come down to the C++ programming language’s syntax. When compiled into a script, the code formed illusory AMD Navi GPU codenames at first glance. However, once simplified, the codenames give way to rather inane script that may harsh the AMD Navi buzz a little.

The correction was posted over at netkas.org. Here’s some of the code ‘demangled’.

It’s all rather boring, really. You can try it out for yourself here. Name mangling is used by C++ compilers to avoid functions clashing that have the same name.

But never fear, while we may be scooting past the launch window set by initial rumours, we now expect AMD to announce Navi in June with a full launch following in July.

Perfect pair: Here are the best CPUs for gaming

That puts the announcement awfully close to E3. We expect AMD to also announce its 3rd Gen Ryzen CPUs over at Computex shortly before, and it could be a big win for team red to dominate both mid-year shows. Nvidia might have a mainstream graphics card contender up its sleeve in the GTX 1660 Ti, however.