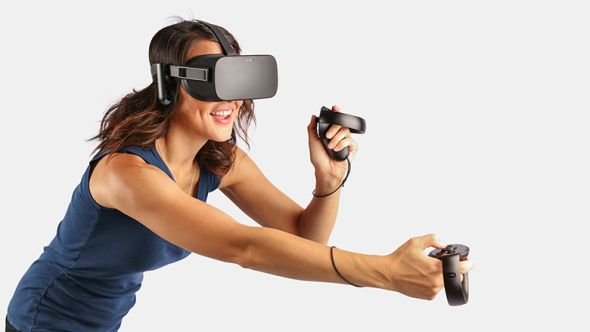 Fast. Faster. The fastest. These are the key tenets AMD’s Roy Taylor wanted to get across as we spoke about AMD’s new wireless VR acquisition, Nitero. “We’re going to be the fastest, no one is going to be able to touch us.”

You’ll need a decent GPU to keep your VR experience from reintroducing you to your lunch, so pick your next one from our list of the best graphics cards around today.

AMD only completed the acquisition of Nitero a couple of days ago, but with the ink still drying on the paperwork Nitero’s co-founders, Pat Kelly and Sven Mesecke, were out at the Bristol-based VRWC event today talking about the next-generation of virtual reality headsets.

The cables are a huge barrier to the level of immersion current-gen VR offers. I’m all too aware of the dreadlock of cabling coming out of the back of my head when I’m strapped into a Vive and, although to a lesser extent, the same is true with the Rift. What Nitero, now AMD, are doing is to create a new wireless protocol for VR that can cope with the demands of not just what the headsets require today, but also what the next-generation of those headsets will require in three years.

I’ve spoken before about the struggles wireless VR is going to have at the 60GHz range and that’s something Nitero have already had to deal with. Their biggest struggle has been losing signal when the 60GHz transmitters lose line of sight, but by the introduction of their phased array beam forming technology they are now better placed to locate the player, negating the almost crippling need to have line of sight 100% of the time. 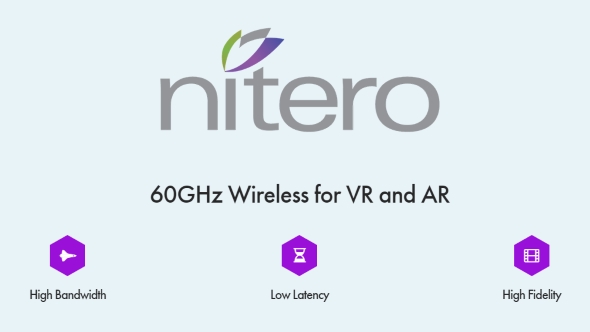 But that level of wireless signal is absolutely vital for the high-fidelity demands of even today’s headsets.

“If you want to use high-end WiFi today, if you want to use that for VR you’re going to have to do some pretty crazy stuff,” says Kelly. “And it’s not going to be that well, it’s not going to be that robust. And you’re already at the ceiling. With Nitero we’re already accelerating. We’ve talked a lot about beam-forming and how key that is, it’s got to be robust, like a cable connection.”

Nitero have also been working to bring the latency right down too, so as not to add too much to the already stringent demands of maintaining presence for the user. It’s too early for them to talk numbers, but they’re targeting the extra latency of the Nitero silicon being only “a very small portion of the overall latency budget.”

Along with Nitero’s co-founders, AMD’s Roy Taylor wanted to hammer home the message that, with the new Nitero tech, AMD’s wireless VR approach will be the absolute fastest around. But the new AMD-ers were also keen to point out it’s not going to happen right away.

“We haven’t disclosed the timing of when it’s going to come out,” says Kelly. “It’s certainly a challenging problem to solve when you look at the next-generation features that various OEMs are putting together.”

So the Nitero tech isn’t going to find its way into the current crop of headsets on the market. They’re laser-focused on what’s coming next and see the integration of their silicon into the second-gen HMDs as absolutely vital. 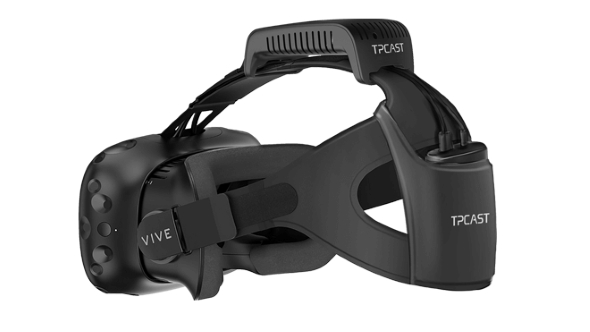 “The dongle approach is a way to take care of today’s devices,” continues Mesecke. “However the big challenge, and where we want to focus all of our efforts, and where we have before the AMD acquisition, is let’s take care of integrating this into second-generation demands, which are much higher than today.”

Speaking with Oculus’ Jason Rubin at GDC though they’re concerned about the added cost of bringing wireless VR to the marketpricing people out of the game. But it’s a delicate balancing act of enticing new users to take the plunge with better pricing of the hardware and headsets and giving the existing VR fanbase the upgraded hardware they’re craving having spent time in the current-gen virtual reality world.

But Nitero’s Pat Kelly argues that part of the cost of integrating their wireless technology into the headset can largely be offset purely by the removal of those wires.

“We can’t talk about numbers right now, but if you look at the cost of the wires today, the wires are quite expensive,” Kelly explains, “because they have to be thin – because you don’t want to have big, heavy wires hanging on folks – and they have to be long. And then, with data-rates going up into the headset when you get to next-generation displays and so forth, you can imagine those cables are going to get more costly. So yes, there is going to be a cost to adding wireless into the headset, but you’re going to be taking away a significant cost too.”

It’s not just about what this means for the end user though. The continued investment into VR, even when the market doesn’t seem to be growing as quickly as was expected/hoped, is vital to keep encouraging developers working in the field. They need to know that, even though the growth might be slow, companies like AMD still view it as inexorable.

“The developers need to see the kind of commitment and support, like from AMD, saying we are going to render frames at the kind of resolution you want for this type of even more realistic gaming experience,” explains Mesecke. “And when you’re developing these experiences you can count on those cables being gone too.”