AMD seem to be clawing their way back into contention with rivals Intel in the CPU market. At the moment they have the highest market share percentage they’ve seen since early 2014.

It looks like people are particularly keen on AMD CPUs at the moment, but are they right? Check out our guide to the best gaming processors you can buy.

A CPU market report on the Passmark database suggests AMD market share is on a sharp upswing, sitting at 26.2% at the time of writing. The red team’s share has surged by 5.4% since last quarter, adding up to a total of 8.7% share pulled away from Intel since this time last year. The blue team’s market share now stands at 73.70%, down from 82.50% in Q3 2017.

The report displays this information through a graph, and illustrates the gulf in market share which has existed between the two companies for roughly a decade now. The blue and red lines are finally on their way back together, however, possibly thanks to the warm reception to their Ryzen chips, the rollout of which started in March. 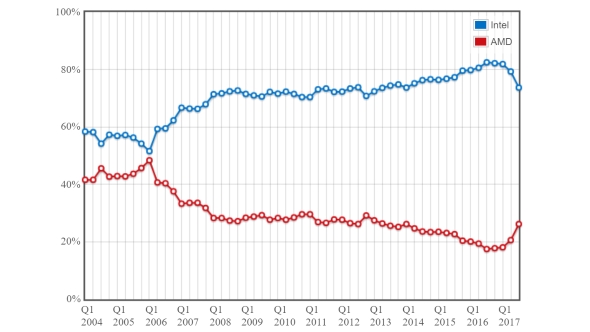 This is the biggest quarterly increase in AMD’s CPU market share in that time. Only time will tell whether the release of Intel’s high-end desktop chips or AMD’s own 16-core beast, Ryzen Threadripper, will adjust the graph one way or another. If Threadripper’s price rumours are true, we think we could be seeing the start of AMD fighting their way back into contention across all fronts.

There are some caveats to this data, however. Passmark themselves point out the graph is based on benchmark results posted on their database, and therefore charts CPUs in use rather than the amount of CPUs purchased. There are likely to be more tests happening on the newer processors than the existing Intel chips, so it stands to reason there would be a fairly significant change. And, as their software only runs on Windows, Linux and Mac users aren’t evidenced by this data either.

Having said that, these results will certainly add to the hype surrounding the big red versus blue showdown we’re currently at the start of, and show a reversal of the seemingly inexorable decline of AMD’s share of the CPU market. What about you guys, anyone out there made the switch from Intel to AMD this year?