March 1, 2019 Updated with details of Microsoft’s DirectX12 implementation of VRS.

An AMD patent application has been published today detailing its own method of variable rate shading – one of the key, non-RTX features of Nvidia’s latest Turing graphics card architecture. The application was filed back in 2017, and the timing does suggest there’s a good chance this could be part of the upcoming AMD Navi GPU architecture expected to launch in the summer.

Variable rate shading (VRS) is essentially a method for optimising the amount of work that your graphics silicon has to do at any one time. The idea being that because huge parts of a scene don’t actually change that much from frame-to-frame, yet the GPU has to start more or less afresh each time, there are potential performance boosts available.

VRS gives the GPU the ability to section out a frame and decide what needs fine grain rendering and which parts don’t need to be rendered in full detail. Basically it can vary the rate at which it shades different parts of a frame – sections with a lot of visible detail can remain at the standard rate, while things like walls or the sky can have a lower shading rate. This wouldn’t really affect image quality and yet can offer genuine gaming frame rate boosts.

The patent application has surfaced on Twitter, and shows that AMD has also been chasing down this new feature. Nvidia might have gotten there first with its Turing GPU, but hopefully this means it’s going to make an appearance in the Navi shaders too.

If both AMD and Nvidia’s mainstream graphics architectures are able to take advantage of variable rate shading techniques that creates a far greater incentive for developers to use it than if it was just being used by one side of the graphics technology divide.

And the implication is that it could go further than just PC games too – the next generation of consoles from Microsoft and Sony are going to be powered by AMD, and specifically by AMD’s Navi GPU architecture. That means practically all future games could benefit from variable rate shading to boost their performance, almost guaranteeing widespread use of the technology.

Indeed Microsoft is folding Variable Rate Shading into the DirectX12 API, with help from Nvidia, and presumably from AMD too. Xbox GPU architect, Martin Fuller, is giving a talk at GDC 2019 offering a deep dive into the new feature which enables “significant frame time savings on modern GPUs.”

And that gives more credence to the possibility of the next Xbox console sporting variable rate shading, and genuinely widespread support. 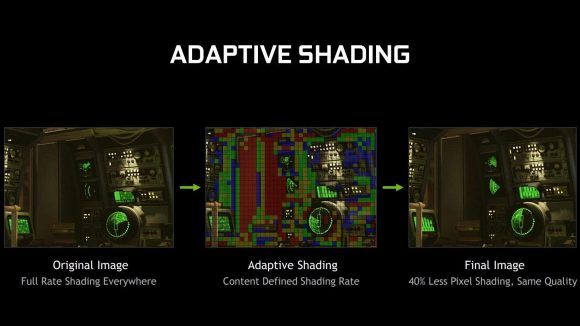 The use of motion adaptive shading is most obvious when applied to something like a racing game, or something like Grand Theft Auto, where there is a huge amount of motion. Things in the middle of the screen, such as the car or character, which aren’t be subject to a lot of relative motion will be rendered in full. Everything else that is moving rapidly can then be rendered at a lower rate as they don’t need the same level of detail. Our eyes can’t perceive the pixel quality difference when they’re flying past at speed anyway.

Right now: These are the best graphics cards available today

Content adaptive shading is the algorithm which could be more widely used as it’s the one which analyses the detail in a scene and decides what needs the highest quality rendering and what can have a lower rate. It does this by determining the spatial and temporal colour coherence between frames – what’s moved and what’s changed colour from frame-to-frame.

Nvidia has estimated that with VRS enabled the GTX 1660 Ti delivers 1.5x higher frame rates compared with the GTX 1060. And if AMD can bring that sort of performance uplift to Navi – and the next-gen consoles – that could make a big difference to its future mainstream GPUs and our gaming experiences.