At the Capsaicin event at SIGGRAPH in Los Angeles yesterday, the AMD Vega GPUs were officially unveiled with the final release date on my mum’s birthday. That’s August 14, for those not in my immediate family. That’s just over two weeks ‘til we can get ourselves some high-end Radeons, people!

You’re going to need a fine processor to make the most of your graphics card, so check out our pick of the best CPUs for gaming around today.

As expected, there are three AMD RX Vega cards coming at launch, though the earlier XL, XT, and XTX nomenclature looks like it’s been reserved for the different Vega 10 GPUs they have at their hearts. The base model is the AMD Radeon RX Vega 56, starting at $399, with a higher-spec AMD Radeon RX Vega 64, which is set to cost $499. Both models are the air-cooled versions, but there will be a higher-clocked, liquid-chilled RX Vega 64 option, likely to cost $599.

Alongside the AMD Vega release, they’ve also unveiled their new Radeon Packs, in Red, Black, and Aqua trims. These are essentially GPU ‘bundles’ which cost $100 more than the card-only pricing, but give you $200 off a 34-inch Samsung ultrawide gaming monitor, $100 off certain Ryzen 7 1800X / 370X motherboard combinations and free copies of Prey and Wolfenstein II: The New Colossus.

The $499 Radeon Red Pack gets you all that plus the RX Vega 56, the $599 Radeon Black Pack comes with the air-cooled RX Vega 64 and the $699 Radeon Aqua Pack gets you a life-size Aquaman collectable with karate-chop action.

The RX Vega 56 GPU comes with 56 next-gen Compute units (see what they did there?) and therefore 3,584 GCN cores. AMD have got the chip running at a respectable 1,156MHz base clockspeed and 1,471MHz boost frequency.

The RX Vega 64 chip follows the same naming scheme, sporting 64 nCU and 4,096 GCN cores. The difference between the liquid and air-cooled GPUs is down to the frequency they run at. The air-cooled card has a base of 1,247MHz and a boost of 1,546MHz, while the water-cooled variant starts at a hefty 1,406MHz and a boost frequency of 1,677MHz. 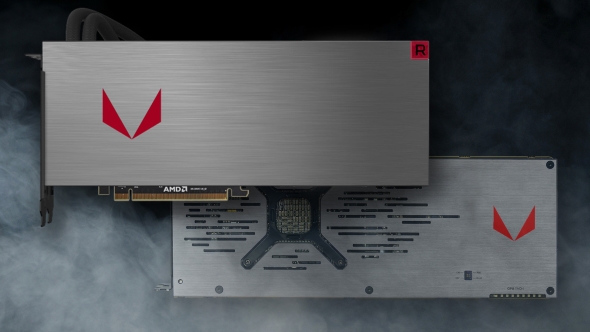 Interestingly, all the AMD Vega GPUs they’re releasing in August will be sporting 8GB of HBM2, and there’s been no mention of a higher-spec 16GB variant, following the same lines as the professional-level AMD Vega Frontier Edition card.

It could be that AMD are holding such a configuration in reserve to released a Titan-esque style card, or they’ve decided doubling the HBM2 memory would make it too expensive given the level of gaming performance that it’s likely to deliver. 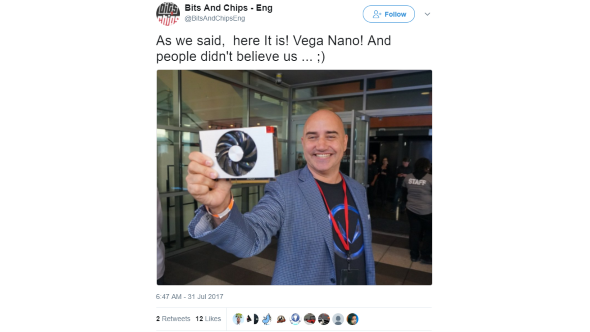 There is also going to be an AMD Radeon RX Vega Nano too, as shown by Bits and Chips this morning. Though we don’t yet know the specs it’s hopefully going to come with the AMD Vega 64’s GPU configuration.