AMD Contrast-Adaptive Sharpening (CAS) technology is now live in F1 2019. Forming part of AMD’s FidelityFX toolkit, which was launched alongside the RDNA architecture and RX 5700-series GPUs on July 7, CAS is a dynamic sharpening filter that AMD hopes will allow for high-quality post-processing without degrading performance or introducing visual artifacts.

F1 2019 has been a hotbed of post-processing action since its launch in June. Both AMD and Nvidia will, at some point, incorporate their own GPU technologies into Codemaster’s latest game: AMD with FidelityFX and CAS, and Nvidia with Deep Learning Super Sampling (DLSS). However, Nvidia DLSS support will have to wait for a later patch.

“Just a quick update on yesterday’s correction to our patch notes for 1.07,” Codemasters’ updated patch notes read. “We inadvertently released a partially completed integration of Nvidia’s DLSS technology in patch 1.07 which was not supposed to be enabled until a later patch. We are currently working towards enabling this in a completed state for an upcoming patch. Thanks to Nvidia for helping us in tracking down this issue.”

AMD’s FidelityFX CAS is live in patch 1.07, however, which the company claims will have a low performance cost, particularly on AMD Navi and Vega graphics cards. Both of these architectures are built with the ability to compute two FP16 operations at once for more efficient operation, otherwise known as Rapid Packed Math. AMD Navi launched this time last month in the RX 5700-series graphics cards, which should be perfectly suited for the job.

According to AMD, CAS exposes detail in low-contrast areas, maintaining sharpness and image clarity while minimising artifacts. There are two settings:

The actual effect of CAS you can see in the image AMD provided below. It’s only a slight change, but nonetheless, if performance impact is indeed negligible, the optional upsampling included with CAS could prove itself a net gain for users on GPUs unable to hit higher resolutions capable of delivering greater clarity and sharpness natively. 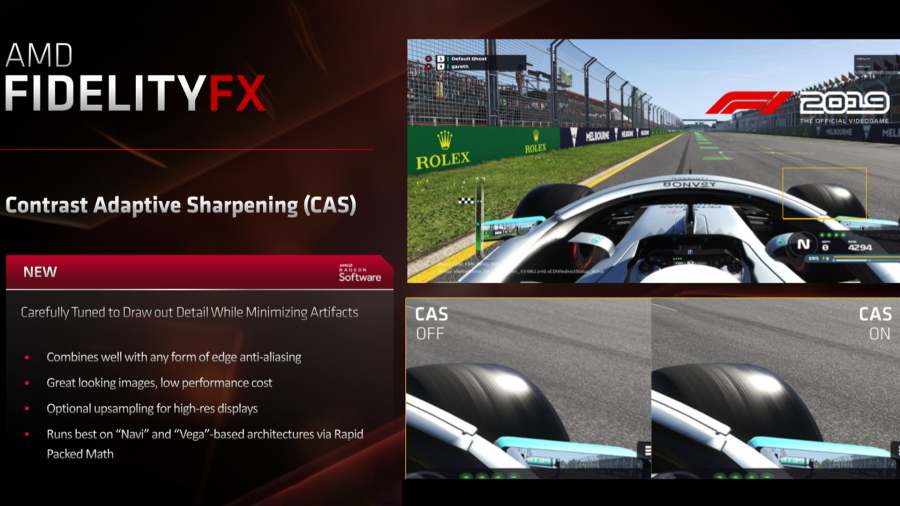 Nvidia similarly offers upscaling with DLSS, which is also (in theory) capable of a secondary mode purely for anti-aliasing and image quality called DLSS 2x. One of the major differences between the two companies’ approaches is Nvidia’s use of deep learning and its Turing architecture’s inference Tensor Cores, requiring its cards.

Nvidia’s DLSS technology is also a closed ecosystem, while AMD’s FidelityFX is open-source. An unexpected result of which is AMD’s tech works on Nvidia graphics cards, too.